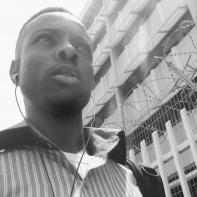 O-Jeremiah Agbaakin was born in 1994 in Osun, Nigeria. He holds an LL.B (Law) degree from the University of Ibadan. His literary works are forthcoming/published in Diode Poetry Journal, Temz Review, the Brooklyn Review, OBSIDIAN, Sierra Nevada Review, StepAway Magazine, and elsewhere. A finalist in the 2017 Korea-Nigeria Poetry Contest, he has been nominated for the Pushcart Prize and the Best of the Net Award. He is the submissions editor for Dwarts Magazine and a poetry reader for PANK Magazine.

upon learning that the snake writes

its own history. parchment made of old skin
shed painlessly, a part abandoned in greasy,
moth-eaten lintel in Goshen. and in writing,
the snake is never caught red-handed. it has
no limbs except in my language wherein it's
always shrunken inside like absence. the first
snake stew that reddened my lover’s rice did
taste of phobia. it's true that my story became
written only when the snake came. she hisses
through all of my history, impressing a white
tongue like harmattan on my  skin. last night
it came in through a crack  in the parlor wall.
my lover gripped it   thinking it was my belt
and you could tell a woman has misread the
reptile again. in the beginning, God created
time and a lode star pointing up to him like
blame as the fangs came apart & clocked (for)
rebellion. my poems find me ancient & rusty.
and father wants to switch his pets. in  my
language a boy who finds honey must abandon
his bean cake. in this poem, my father wants to
keep both: my mother and her new jealousy.
and the children, crumbs, children of the cake.

portrait of a poem as dna strand

the book   of the dead   bodies in this poem
includes my great   grandmother,   eagle-eyed,

never shut   even in death.   my fingers plow
into the cave   in her mouth,   lifting heavy

things.   i have my father's glottis   shot
by silence.   my brother was born   with

his scream shut with womb water, tongue
sealed inside   like a fang   held back by its

own venom,  an old skin that won't come
off unless i use a pen. i don't want  to leave

a trail behind this poem. i burn my echo
in a shell & swallow the ash hot. i watch

my belly  irradiate. i confess that this poem
isn't close to a whorl like my father’s voice.

i confess i was born with a whorl: my speech
an elastic slur like the serpent’s   defence.