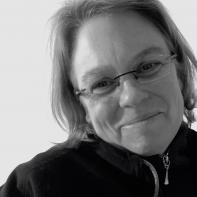 Catharina Coenen is a German immigrant to northwestern Pennsylvania, where she teaches biology at Allegheny College. Her creative work is forthcoming or has recently appeared in The Southampton Review Online, Appalachian Heritage, Christian Science Monitor, and elsewhere.

To remove dry raw egg from concrete, try using an acid, such as cola or vinegar.

8 a.m. I don’t drink cola, but Allie, my dog-walking friend, says she can bring by some vinegar. She only lives a block and a half away, could walk it right over in a bit—the kind of neighborly gesture for which I’ve grown to love my Pennsylvania town. Last night she called to ask if I’d heard that the man who moved into the house next to mine a month ago, professor of English at my school, was arrested on federal charges of child pornography. I hadn’t heard. Now she half-turns, her eyes and mouth hard lines, as she tows her terrier past egg splats that cross the concrete slab in front of his garage. My shepherd, Monty, beset by cataracts and ancient-dog befuddlement, fails to detect the potential snack. The egging likely was a drive-by, the angle slightly different for each smear. Though the entire dozen landed on his half of our side-by-side driveways, the first three must have narrowly cleared my car. The last one still clings to his garage door, shell pieces stuck in a slow-motion drip. I wonder how he knew to close the door, to park his red Corvette inside. I tell Allie I probably do have some vinegar.

Step 1: Clean up any leftover egg shell, white or yolk by wiping it up with a rag or paper towel.

Noon. Paper towels might have worked this morning, before I rushed away to teach my class, but now egg patina shines gloss-hard atop caked yolks. Concrete pores drink in dark-wet, sealed beneath splatted whites. I’m addle-brained, worn-out; I’ve lain awake most of last night. “So, are we just sitting here waiting for him to kill himself or what?” I asked my friend Elmira on the phone, before I went to bed. The local news feed claims my neighbor is home, on house arrest, with an electronic ankle monitor. “I don’t know,” Elmira said, “I didn’t know him well at all. But I’ve been wondering about that, too.” Past tense feels natural, as though removal of a colleague’s e-mail account and website, his disappearance from his department’s electronic roster of faculty, had rendered him non-contemporary. Elmira lives around the corner, down the block. The college, where she and I and my neighbor teach (or taught), looms close enough to hear the science building’s air handlers at night. From my bedroom I can almost touch my colleague’s house, watch two upstairs windows, two downstairs. Nothing moves. Eggs glisten on concrete like the aftermath of a giant’s sneeze. I stare at shiny trails, snail-snot graffiti marking shame. Unbidden, my aunt Agnes’ voice paints pictures in my mind: my grandmother, Agnes’ mother, staring out her bedroom window at her neighbor’s house. She’s in her night gown. It is 2 a.m, November 10, 1938, in my home town in Germany. My grandmother has just admonished Agnes to stay back, not to look. My infant father, Hans, and five-year-old Marlies are sleeping down the hall, oblivious to shouts and shattering glass. Agnes is nine and awake. Torchlight from the street dances across her mother’s face. It doesn’t reach her fists beneath the window sill. Agnes will walk to school on shards.

12:30 p.m. I kneel and reach far back under my kitchen sink; my fingertips scan bottle tops: Murphy’s Oil Soap, furniture polish, pet stain remover. In the small hours of yesterday morning Monty nudged me, panted in my face. Headlights panned across the ceiling, the bedroom walls. He’s deaf and scared of thunder storms, so perhaps he saw wandering lights as lightning strikes. “It’s only cars,” I said, scratching his chest. Muzzy-headed, I wondered if paving crews on Main Street and Highland Avenue really could divert that much traffic down this quiet street. Car doors slammed. Voices. Knocks on a wooden door. An early-morning construction project? More rapping. Rude. Loud. Not loud enough to be my door. Low voices. My neighbor going on a hunting trip with friends? But he doesn’t hunt. Or at least I couldn’t imagine that he would. A trip with his band, then. Or a surprise birthday party. At four am? Several black cars still lined the curb at seven, when Monty and I ventured out to walk. Why would all of my neighbor’s band buddies drive black cars? A large SUV was reversing in the other neighbors’ drive. A glowering face, the hand atop the steering wheel reluctant to lift and return my wave. My fingers find bleach, dish soap, Windex. Is the vinegar bottle’s top smooth? Or ridged? A diesel motor idles in my mind, a heavy truck—a Magirus, or a Deutz. Its headlights flood a swastika on the grain merchant’s house. Agnes teeters on tip-toes, just tall enough to peer over the window sill. Old Mister Albesheim stands motionless against his store’s white wall, slumped-shouldered in his long black coat. Uniformed men push him, stumbling, towards the loading ramp. Agnes watches tears run down her mother’s face. The half-gallon bottle of distilled white vinegar has a molded plastic handle, pulls up heavy against my looped fingers: nearly full. I carry it outside.

Step 3: Allow the cola or vinegar to soak into the concrete for 30 minutes to an hour.

12:40 p.m. I pour vinegar over hardened egg-snot, glance up at my neighbor’s big front window, retreat back into my house. The FBI took his computer and his phone. Last night, after Allie called, I sat inside my car and stared at his dark window panes, cold creeping into fingers from the steering wheel. No lights, no movement anywhere. I drove to yoga class. All through savasana my brain re-plays headlights on my bedroom walls. Those knocks on the door in the wee hours of the morning. Abgeholt. I roll up my mat, pull on shoes and coat, don’t talk to anyone. My hands shake as I unlock the car. With what? Fear of the man next door? No. I turn on the motor, release the parking brake. Grief for his victims? Thousands of children trapped in pictures, on a hard drive in his house, now locked away in FBI vaults. Children whose faces I have never seen. Innocents tortured to feed desires of cruel men—men, who watch pain with excitement, without empathy. But there is more, beneath my rage. More to the shake inside my bones. More to my brain re-playing rapping sounds on a wooden door, my mind’s photograph of the solemn driver in the big black car. I am shaking—for my neighbor? But why? Why am I shaken up for a man whose greed fuels crime against those who can least defend themselves? I remind myself that flashlights aren’t torches, FBI agents aren’t Himmler’s SS. My neighbor isn’t innocent; the newspaper reports that he admitted guilt the moment the FBI knocked on his door. The knowledge doesn’t stop the trembling in my hands. I pull into my driveway next to his, watch moonlight reflect on window panes. I know my neighbor’s face, his voice. I don’t know what makes men act the way he did. I don’t know his story. I’ve petted his little dog. This past Sunday he offered me the log pile in his yard for my wood stove. I wonder if I should contact someone and say I’ll take the little dog, if and when my neighbor goes to jail. Does he have anyone who will? I don’t know who to call.

Step 4: Scrub the stain with a stiff-bristled scrub brush.

1 p.m. The floor brush isn’t under the kitchen sink. I wander aimlessly in search, send an e-mail to a colleague, my neighbor’s band buddy, asking him to call me. He does, nearly instantly. I urge him to visit my neighbor. Not tomorrow. Now. He says his wife said the same thing. He says he’s not sure how he feels or what to do. Others will know exactly how they feel. The college will be in uproar. There will be big words and wringing of hands. There is a faculty meeting tonight. There is a fundraising campaign that just went public; employees got asked to contribute yesterday. Meanwhile, in its bicentennial year, the institution sets new records: the most under-filled freshman class, the football team lost fifty-three to one last night, and now this. Already I have an e-mail from a former colleague, forwarding an anonymized irate message from a former student. Two colleagues write of being silenced when they tried to alert administrators about student complaints against my neighbor a decade ago. Everyone remembers things they’ve always thought. Fingers point in all directions. I am Monty, panting at light-beams crawling over walls, wishing I knew who to nudge. I will go to an ad-hoc all-campus meeting. Students will scream at administrators. Faculty will profess outrage. I will listen to students telling stories of abuse—not by my neighbor, but by men like him. I will consider throwing more eggs. In the basement, between old paints and supernumerary kitchen tiles, I find the bristle brush. Outside, vinegar puddles atop caked eggs. Pushing a brush back and forth across concrete: the thing I know how to do. Five hundred years of practice have made street cleaning about as natural and soothing to Germans as brushing teeth. Women and men with bad backs still swish brooms along their stretch of village sidewalk every Saturday afternoon, a ritual first instituted by Eberhart im Bart, first duke of Württemberg, in Stuttgart, Germany, the year when Christopher Columbus sailed towards America. German history is writ in sweepings between paving stones. When new gas lines or water mains are laid beneath a street, newspapers report on medieval coins and ornaments found in dirt between lifted cobbles. No articles appear on finds of glassy shards from last century’s shattered store displays. With the right microscope, you could discover white or yellow paint. You could assemble pigment into boycott smears and stars.

Step 5: Rinse off the area with clean water.

2:30 p.m. The garden hose reaches the top of my neighbor’s drive, but even with the tap cranked open all the way, I can’t get water to play over more than a third of the soiled concrete. I duck my head and fetch the big red watering can. Should I be doing this? Should I not? Fill, lift, pour, repeat. Egg whites cloud, swirl, run in rivulets. Neighbors drive by. Caked yolks stay put. I pour more vinegar. I scrub. I don’t look up. Acid bites my sinuses. I rinse. I scrub some more. My fingers, shoulders, knees know this work, this necessity, but I can’t look at anyone, desperately don’t want to talk. Years later, colleagues I respect will say that for some people it’s okay to kill themselves. Others will talk about their children, about how hearing of any help extended towards my neighbor caused them pain. I grip the brush like holding to a single thought, rubbing it back and forth: No one is ever just one thing. I imagine neighbors standing behind curtains. My eyes sting; better not to rub them with vinegar-soaked hands. More cars go by, slowly. I dig fingernails into yellow stain. Another neighbor pushes a baby stroller along the street, tugging a toddler alongside. “What is she doing?” the little girl asks, hanging back, pointing with her one free hand. “She is…cleaning,” the neighbor says, pulling the child a little harder by the arm.

‹ Nonfiction up "The Perfumer's Organ" by Heidi Czerwiec ›