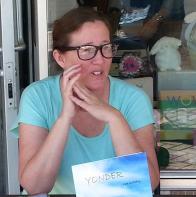 Kate Cumiskey is a writer and teacher living in coastal Central Florida. She holds an MFA in Creative Writing from the University of North Carolina, Wilmington, and is the author of several books of poetry and nonfiction. Her award-winning writing has appeared in numerous literary magazines, including Crazyhorse, Beloit Poetry Journal, and Paterson Literary Review. She is currently completing her memoir of growing up with a father who was a lead designer for NASA on the Apollo, Shuttle, Voyager, Skylab, and International Space Station programs; excerpts appear in peer-reviewed and literary journals.

After listening to my sister read, online, from her new book of poems

On her first day as a full professor I write about our father.
How, when he held her just home from Halifax Hospital
that first afternoon, he was fluent in this.

The light through jalousies on the river side of the house
reflected on concrete block like shells bouncing morning
through salt water. How if a Billy Wofford painted those rays

& Dad holding Carol Ann, I could tell you just where he sat
and at what time of day, relative to river & ocean. So
could she. As she imagines our fathers’ arms beneath her,

quiet, she knows she learned right then to look out: closed lips
pursed just so, half-mast lids, dark eyes wishless, blue as peace.

The moon is round today

my sister writes. She and I have both been thinking of our father
in elliptical ways we do. Yesterday, an astronaut who might have
known him wrote, asked for a picture. I am old, he said, and forget
things. I may have given him an award. I’ve written back before
realizing which Apollo he was on, that my father designed a filter
so he and his two friends could breathe their way home. From this
perch on spinning blue I wonder, why did he send them to the Moon?
Because it was there trite & silly: nothing to do with men I knew.
More likely to give us something to cling to when hard times came.

You are here. Look up.

Hard Times was a cow his uncle could not kill after her milk dried up.
She got them through the Depression. Grateful, the orphan, his uncle;
they agreed Hard Times deserved better. This poem is about honor.
The moon is round today, my sister writes