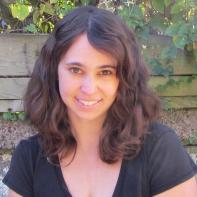 Anjali Sachdeva’s fiction has appeared in The Iowa Review, Gulf Coast, Yale Review, Alaska Quarterly Review, The Literary Review, and Best American Nonrequired Reading. She is a graduate of the Iowa Writers’ Workshop and has taught writing at the University of Iowa, Augustana College, Carnegie Mellon University, and the University of Pittsburgh. She also worked for six years at the Creative Nonfiction Foundation, where she was Director of Educational Programs. She has hiked through the backcountry of Canada, Iceland, Kenya, Mexico, and the United States, and spent much of her childhood reading fantasy novels and waiting to be whisked away to an alternate universe. Instead, she lives in Pittsburgh, which is pretty wonderful as far as places in this universe go.

This interview was conducted via phone by Interview Editor Nicole Floda. Of the process, she says, “The short story collection All the Names They Used for God was fascinating, and as demonstrated in this interview, Anjali approaches her writing with passion and professionalism. Her vivid imagination is apparent in her fantastical yet grounded and meaningful stories, each packing more of a punch than the last.” In this interview Anjali Sachdeva talks about her creative process, the role of faith in her collection, and her encounter with a huge flock of crows on campus.

Superstition Review: Thank you so much for agreeing to do this interview. Within the titular short story “All the Names For God,” you address the real-world Boko Haram kidnappings in Nigeria. Could you elaborate on why this particular setting and circumstance stood out to you?

Anjali Sachdeva: I was reading an article in The New York Times on the 1-year anniversary of the kidnappings that said: this has fallen out of the news cycle, but most of these girls are still being held captive. This is still a thing that’s going on even though we in America have forgotten about it. That was the general gist of the article. And I don’t know why, but that just really hit me. Because it was true, I had forgotten about it. I’d seen it when it was initially in the news, and then it had just gone out of my mind. That article shook me. From there I ended up reading a lot of other articles, particularly interviews with young women who had escaped from being captured by Boko Haram and then returned home, getting some information on what life was like for them after they came back home. From those various articles, that’s how I started thinking about a lot of these women. After they return home, their lives are still very difficult because sometimes their home communities are not very welcoming to them when they come back, and of course they’re dealing with all kinds of trauma. I wanted to think about that idea of aftermath.

SR: In the short story “Manus,” you describe the everyday lives of humans as they learn to live and work without hands, instead relying on “Forkers.” What was your process like when creating this world? How did your own perception of hands change as you wrote?

AS: I have to say that story is, for me, an unusual one, in that the basic idea of aliens taking off people’s hands just came to me. Usually I see something in a news story or a science magazine or something that’s interesting to me and I go there, but that idea just came out of the blue. From that starting point, I wrote the way that I usually write, which is I just write isolated scenes. I almost never start at the beginning and go to the end. I was just doing scenes, and one of the scenes had the word “mandatory” in it. I thought, because I’m an English nerd, oh, that word probably comes from the same word as hand. I looked up the dictionary definition, which ended up being at the beginning of the story, and with so much thinking about that connection between. The root word for hand also means power or domination. Just thinking about how those two things are interconnected and how reliant people are on their hands and how much they define us as human beings because we’re the only animal with opposable thumbs. Just thinking about how much that is woven into every aspect of our lives.

SR: In the short story “Killer of Kings,” the angel muses, “[Humans] are just so many stories patched together, so many forgotten days encased in bone and meat. One might unearth almost anything with enough searching. Being a muse is mostly this—a sifting through of memories to find something of merit, hauling it to the surface where it can shine.” This quote stood out to me as an eloquent description of the writing process. Could you discuss how your own stories germinate?

AS: It is often a word or an image. A lot of times it’s an image, and I don’t write hard science fiction but I like things that are sort of science inspired, so often I’ll be reading a scientific article that will have some piece of information that’s interesting to me and that’ll be a kind of genesis point. And from there I’ll write a scene, and from there typically I’ll get a character. I know a lot of writers start with a character and I almost never do that.

SR: In a 2018 interview with The Rumpus, you mentioned that most of your stories explore what people put their faith in instead of religion, such as science or nature. In many of the short stories in this collection, such as “Glass-Lung,” there appears to be a tension between idealistic faith and reality. Otto Freyn entertains this idealistic faith, placing it in archeology, yet in the end, the glory that he hoped for eludes him. What role does faith play within this story collection?

AS: I think it plays a huge role and I think I wanted to say not so much that faith is foolish. I’m not trying to say that it is foolish to have faith. But I do think that intense faith has a dangerous side to it as well. It doesn’t mean that you shouldn’t have it, but it’s good to acknowledge the flip side of faith. So there’s another story: in one of the other stories in the collection, “Robert Greenman and the Mermaid,” you have this guy who is a very sensible, steady guy who’s a fisherman and he’s out fishing and sees this mermaid and it wrecks his life. I think that kind of idea that something otherworldly or incredibly powerful can provide a special experience. We all want to be that person who has that special experience but I think that special experience has a downside, as well.

SR: Why do you choose to write short stories? What is it about the form and structure that excites you, and have you experienced any drawbacks to it?

AS: I think what excites me about the form is the ability to really deeply explore a single idea. Especially within this collection, stories are in a wide range of time periods and locations. It was great for me to be able to just say, okay, here’s the next idea that’s interesting to me. Or here’s an idea that’s on my mind that I can’t get rid of, and I want to do a story on that. You don’t have that same freedom in a novel to just keep exploring in different directions every 20 pages, right? Similarly with characters, I could do a lot of different characters. That is really appealing to me. I love reading short stories, and a lot of what I read are short stories. I think I just enjoy the form. It’s so essential and I think there are a lot of ideas that you can explore in a short story in really interesting ways that might be tedious if you went into them for 400 pages. For the main drawback, I think I would say that it’s very difficult to publish short stories. Writing wise, I don’t have a lot of issues with them. I guess there is always having to come up with new ideas, but that part is actually exciting to me. I don’t mind coming up with ideas.

SR: On your website, you have a link to the podcast, entitled “Step Away From the Desk: Experiential Writing,” where you discuss the ways in which going out and participating in the world can help enrich and supplement an author’s writing. Could you describe some recent moments when you undertook a form of experiential preparation and it impacted your writing?

AS: I actually just took a class in audio essays which I found really interesting. That was fascinating because there were all these aspects of converting an essay to an audio form that I hadn’t thought about. I ended up doing a different essay but I started out writing an essay about this huge flock of crows that nests on the campus where I teach. I went around just listening very intently to the sound of them. It made me so hyper-aware of all the other sounds around me while I was thinking about writing it. It was that kind of experience, where you either revisit a place that you are familiar with but you look at it in a different way, or you force yourself to go to some environment or some situation that you haven’t been in. It gets your blood going and gets you excited. I probably do that more for nonfiction but it also absolutely ends up in my fiction. A few of those stories in the collection are based on trips that I took to National Parks. And that’s the thing, I’m here in this place that is completely unlike the place that I live, and it’s burning its way into my brain every minute that I’m here.

AS: I do most of my work in libraries, or coffee shops, just because I have two small kids who are not in school full time and finding time to write at home is just useless. But before that I always used to write in bed, and my house is always a mess. It was not a pristine and beautiful writing space ever, but honestly, being in bed is really comfortable and cozy. As soon as I’m locked in to my computer screen, I’m not noticing anything that’s around me anyway. I don’t listen to music while I write because I can’t think clearly while listening to music, which I guess sounds strange. There’s a couple public libraries that I’m at a lot because I like them, and I don’t have to buy a cup of coffee every hour. But I do go to coffee shops and I used to have more of a set space. Now it’s just wherever I am in the moments when I have time to write.