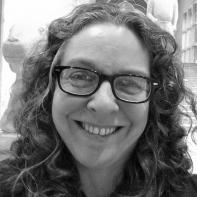 Alison Mandaville grew up in Portland, Oregon, Turkey, Massachusetts and Yemen. A Fulbright award to Azerbaijan led to grants facilitating several summer writing workshops for Azeri women writers and visual artists. Her poetry and prose translations from Azerbaijani and interviews with Azerbaijani writers have appeared in World Literature Today, Two Lines, and The International Journal of Comic Arts. Her own poems have appeared in Fifth Wednesday, Skidrow Penthouse, 13th Moon, Seattle Review, Off the Coast, Berkeley Poetry Review, Poets Against the War/Best Poems, Knock, and Magma, among other places. She writes, translates, and teaches future English teachers at Fresno State.

Explain to me. I’m still confused. How atoms
unweave from the root drive. I watch

how sand funnels, blows into the dunes. I watch
the silicate that spreads across

and binds my hands as hands, the gull
held still in air above me, against the wind, hovering,

even my mother in a box. But just the dust of her. Her water
burned away. And all her proteins. The little fat

she kept still near the end. The hardness of her
breathing when I came. Those twelve hours

shocked and rapt, all that singing, and now the box
in white butcher paper. On a shoe shelf

in my closet. And yes—like an old jigsaw puzzle,
pieces missing, perhaps—but after all

it’s no analogy. Pieces are missing. I try
and try, fingers raised in the gale grit

but I can’t arrange it, what’s left—
the ragged shore, the bits of foam, and shell,

blue weft beaming through, so many holes,
someone waving—maybe—through the spray

The tide regains its purchase on the land—an economics
of sand. And oysters in the far and distant mud. The land

is almost eternal. And brown. The grays can pass for blues
until I lay open the village egg to yellow. Or come upon

soon. One egg was hard to peel. The other smooth
as the dead seal before it starts to rot too much. The dip

of salt and pepper. I don’t know what to make of things
I’m missing. A brief shift of birds turns sideways

to the sea water mixed with river water. They catch
the scant March sun. Become visible. Then turn

as one thing—almost—wings shuttered against sight.
The earth will be fine said my friend, the geoscientist.

We could hardly meet each other’s eyes.
If matter is conserved, it’s not as us.

At first you think the trees are people. Bent and running.
Then people resolve into trees, who cannot run, bending.

Bombs lift the dirt from the ground, from roots—
strafed, unsafe, no one considers the topsoil.

Who runs? Who stays, remains?
What did the teacher tell you, anyway?

What to do with the remainder after rough division.
Things don’t come out even. The split

pomegranate ragged edged—what does the industry
call them? Arils? The seeds wrapped in red.

Like peace by any other name, please. Because peace
like seed has become arid, unlucky, unloved, unlikely,

the part caught in our teeth, shrapnel in the crotch
of a tree that couldn’t run, that bends and bends.