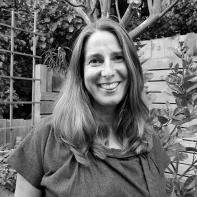 Kim Magowan teaches in the Department of Literatures and Languages at Mills College. She is the author of How Far I've Come, forthcoming in 2022 from Gold Wake Press; the novel The Light Source (2019), published by 7.13 Books; and the short story collection Undoing (2018), which won the 2017 Moon City Press Fiction Award. Her fiction has been published in Booth, Craft Literary, The Gettysburg Review, Smokelong Quarterly, Wigleaf, and many other journals. Her stories have been selected for Best Small Fictions and Wigleaf's Top 50. She is the Editor-in-Chief and Fiction Editor of Pithead Chapel.

Stealing Mary’s car is a negative feedback loop. We’re correcting an imbalance, restoring homeostasis. “Like injecting insulin to uptake excess glucose from the bloodstream of a diabetic,” Bernice says as she fishes Mary’s car keys from Mary’s purse and dangles them from her pinky finger. In Bernice’s analogy, Bernice and I are the suffering diabetic, Mary and Liam and Hand the glut of glucose.

I don’t want to take my hands off the rabbit. It’s velvety, the color of a licked caramel.

We’ve been waiting nearly thirty minutes in these guys’ apartment for Mary to descend the stairs from their rooftop. Liam, the hot guy, brought her there, because Mary said, “There’s a full moon tonight. I just love a full moon.” She traced the lip of her beer bottle with her fingertip. Mary was wearing her tight, expensive jeans. No doubt her ulterior motive, besides getting Liam alone, was to show off her ass climbing the stairs. Wanting to look at the moon, ha.

Ten minutes ago, the bearded guy with the scarred hand—somehow neither of us caught his name earlier at the bar—abandoned us to go “check on them.”

Always guys prefer Mary over Bernice and me. Always Mary is happy to absorb the attention.

As we head out to the car, Bernice says, “What kind of grown men own a fucking rabbit?” She tugs at her skirt. She’s been battling that spandex all evening.

Some guy called my house one night—my parents still had a landline. When I answered, he said, “Carly?” Instead of telling him he had the wrong number, I said, “Yeah?” My mouth was full of leftover lasagna. He said, “Carly, what do you have in your mouth?” I listed every ingredient from spinach to fennel to ricotta cheese. He said, “You’re so alive, Carly. So fucking alive.”

That pretty much sums up how I feel about the rabbit. It’s warm, it has the perfect amount of heft, and beneath my fingertips, its muscles twitch. I don’t want to let it go.

In the car, Bernice says, “We’re going to the beach. Light me a cigarette?”

One hand on the rabbit, I push in the car’s electric lighter, though Mary forbids smoking in her car. I see the ocean in the distance. That is, I know the ocean is there because of the absence of lights. Or rather, I trust it’s there, that we’re not driving instead into the belly of a giant beast, like Han Solo in The Empire Strikes Back.

When we reach the seawall, Bernice parks the car near concrete steps leading down to the sand, where three guys play Frisbee in the moonlight.

With the sea breeze, the air is chilly. I tuck the rabbit inside my buttoned cardigan, nestling the animal against my chest. It peers up at me, its nose wriggling in rhythm with its heart.

Bernice shakes her head. “Sometimes you act like you’re twelve,” she says. “Leave the goddamn rabbit in the car.” She motions toward the three guys with her chin.

“I hope he does,” Bernice says. “You saw the way Mary appropriated Liam. Did it matter to her for one second that I saw him first?”

Bernice and I were playing pool when Liam asked if he and Hand could join. I was the one he asked. Bernice was gathering balls from the pockets. Technically, I saw Liam first.

But then Bernice looked up, and smiled, and somehow it ended up being Hand who bought me a beer. Though by the time he came back from the bar, Mary had swanned into the room, laughing in that shrill, bedazzling way that turns every straight guy in the room into a bobblehead. Bernice was sulking, and Hand looked back and forth, like he was trying to decide to whom the beer belonged.

The truth is I prefer Hand to Liam, or I would have if only it weren’t for the look of defeat on his face when Mary followed Liam up to the roof. Like they were schoolkids and Liam’s mom had packed a Hostess Cup Cake in his lunchbox, while all Hand got for dessert was a hardened clump of raisins. That look didn’t deter Bernice. When Hand came down the hallway holding the rabbit, Bernice feigned interest—pawed at the creature just to have an excuse to stand close to Hand. Maybe that’s what he wanted, too, though I don’t think so. Because when Bernice said her shoulder ached, an invitation, Hand’s response was ibuprofen. He put the rabbit down on the carpet and returned from the bathroom with a 600-count bottle.

Against my stomach, I feel the rabbit’s long, silky feet. The way they are both clown-like and elegant reminds me of the pointe shoes Mary, Bernice, and I wore in ballet. I was the best in our class—Queen of the Flowers in our last recital, Mary and Bernice two of the frolicking lambs. Then Mary and Bernice decided that ballet was for kids.

“He’s staying with me,” I say. I lift the bottom of my sweater, and three pellets fall out.

Bernice freaks. She says, “I was going to say, for the love of God, don’t act weird, but it’s too late for that.”

She pinched me earlier when I asked Hand if he had the makings for a BLT.

“This girl is never not hungry,” Bernice said, as though she is the epitome of temperance.

The truth is no body is ever in homeostasis. It’s an abstract concept, like infinity. Our anatomy teacher proposed we think of the body’s elaborate system of balances as a container full of hourglasses positioned at different angles. When you shift to correct one inequity, you disturb all of the other balances. Basically, we are all always hungry for something.

Now Bernice hands me the car keys. “I don’t have any pockets.” She takes off her heels to descend the concrete steps. “You should just stay here. You wouldn’t want that rabbit to scamper into the ocean.” Then she’s like an arrow taking aim at the three guys on the beach.

The rabbit nibbles at one of the buttons on my cardigan, and I remove a carrot from my bag. I took it from the guys’ produce drawer. Hand didn’t mention they had carrots, maybe because they belonged to the rabbit.

The rabbit eats half a stick and then stops. I eat the rest.

The man calling for Carly telephoned a few more times. He had other questions for Carly: What was she wearing? Was she touching herself?

Carly was always forthcoming. Because the man gave her his undivided attention. Because she imagined the man’s breath on her ear as he spoke, his fingers on her thighs.

Mary and Bernice would say that the man on the phone doesn’t count as a real hook-up. He didn’t actually touch you, I can hear them say. But what matters is what you feel. I overheard my mom’s friend Donna say that when her husband touches her, she feels nothing. On the other hand, brain scans show that the brain responds precisely the same way to an imaginary slice of apple pie as it does to a real slice.

When I reach the sand, the rabbit digs its claws into me. Maybe it’s the sound of the tide that has spooked it—like a giant tongue licking the beach.

I finger Mary’s car keys. How trusting Bernice is for a girl who just stole her best friend’s car.

Then I think of Hand. I wonder if he’s getting hungry up on the roof watching Mary flirt with Liam, if he craves another spoonful of peanut butter. Or probably it’s the rabbit he longs for—the reliable thump of its tiny heart. Has he returned to the apartment yet and discovered that the two girls he left on the couch have stolen it? I wonder if he knows which girl it was—not the skinny, sulky one, but the quiet one he bought a beer for and then forgot about. Maybe he’s remembering what he said to her before he followed Mary up the stairs: “Be careful of that rabbit. Sharp teeth. He damn near took my toe off once.”