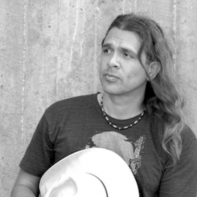 Stephen Graham Jones is the author of sixteen novels and six story collections. Most recent are Mapping the Interior, from Tor.com and the comic book My Hero, from Hex Publishers. Stephen lives and teaches in Boulder, Colorado.

"Getting to the Chorus," an interview with Stephen Graham Jones

This interview was conducted by Interview Editor Tonissa Saul. Of the process she said, “Mapping the Interior by Stephen Graham Jones is an insightful portrait of family, grief, and being careful of what you wish for when you hope to be reunited with a dead family member. His prose is quick to get to the heart of his characters in this brilliantly orchestrated novella.” In this interview, Jones talks about format, Spider-Man, and Tom Petty.

Superstition Review: Mapping the Interior talks about the consequences of waking the dead who were already poisonous people in life. What made you want to see what would happen if that malevolence could cross both planes?

Steven G. Jones: I never figured the dad was all that bad, in life. He was just a guy, doing the best he could. But when he came back, yeah, he came back different. Kind of like his impulse to be alive overrode any checks he'd had on his behavior in life. He's an animal, just, in the shape of a man.

SR: In the book you say that “four is the Indian’s number.” Can you talk more about what that means?

SR: Your last three projects have been a novella, a comic book, and a novelette. What inspires you to work in these different formats?

SGJ: I just like doing everything I can, and that usually means having to hop from shelf to shelf, to keep from overloading any one shelf.

SR: On the back of the book there is a blurb that calls Mapping the Interior part S.E. Hinton and part Shirley Jackson. Was that a surprise to you? What other authors inspire you?

SR: The journal entry you shared on your website for the process of writing Interior is a fascinating read; you write that “The end’s always happening if you’re writing right.” Can you expand on this?

SGJ: There's never any time for doing anything that doesn't immediately contribute to the end. You've always got to be aiming for that last page. Anything else is a slowdown, an indulgence. On revision, you got to cut that stuff out, no matter what kind of polishing you've already done to it.

SR: Another thing you mentioned in your journal is that you thought the end of Mapping the Interior was going to get you in trouble. Why did you think that and has that happened?

SGJ: I'm happy with readers' reactions to the end. It's kind of brutal. But, I mean, it's horror, right? The job of the horror writer is to always go one step farther than the reader could have gone herself. So, had I not gone that one dangerous step past, into darker territory, I'd have been failing in my horror writer duties.

SR: The brevity of this novella cuts right to the core of family and grief. What are some things that ended up in that 3,000 word scratch that you would add if you were to make this a novel?

SGJ: I guess if I were going to put a foot pump on this and inflate it into a novel, the way to do that is—obviously—with more story. I think that would come from the deputy. I kept having to kind of rein his story in, to keep the novella moving ahead like I wanted. But, with more space, yeah, I could let his story—his contribution to the story—breathe.

SGJ: Tom Petty. In that documentary of him, he's up in the studio remixing and re-recording over and over, and he says at one point that he wants the song to get to the chorus as fast as possible. That's a good thing for stories to remember.

SR: You mention Dino’s superhero toys in the book but never by name. Who is your favorite superhero and why?

SGJ: Spider-Man, I figure. I always liked how his powers didn't make life any easier for him. Seems a pretty accurate depiction.

SGJ: Lots of werewolf art. Jason Voorhees on the walls. A deer head behind me. Mementos on all the shelves, and books behind those mementos, and notes the books.