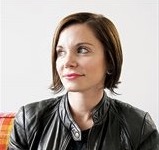 Alissa Nutting is an American author and creative writing professor. Her writing has appeared in Tin House, Fence, BOMB and the fairy tale anthology My Mother She Killed Me, My Father He Ate Me.

This interview was conducted via e-mail by Interview Editor Tonissa Saul. Of the process she said, “Alissa Nutting's novel Made For Love is a wild ride of humor, stark observation, and surprising heartfelt moments.” In this interview Alissa Nutting talks about art coping with failure, sinister power dynamics, and fever-dream writing.

Superstition Review: Last spring you were here at ASU for the Desert Nights, Rising Stars conference teaching a workshop called Writing Shame. In the workshop, you talked about how randomly blurting out the thing you’re afraid of to strangers is easier than saying it to someone you love. Hazel illustrates what you were talking about perfectly with her relationship to Liver. Why is fear easier to claim in front of those who don't already have a firm sense of our identity?

Alissa Nutting: I think a lot about frames of reference in terms of shame and judgement. So much of judgement is context. What's desirable in one context is horrible in another. Talking to strangers, the conversation can be a lot more of context holiday. We can just talk about a fear and not how it reflects back upon us. But if we're confessing the fear to, say, our partner, we're probably confessing to a lot more. There are probably ways the confession shows us to be a hypocrite. We've probably been motivated by our fear and made undesirable, illogical choices because of it. People close to us can understand the links between our fears and our flaws. Those bridges don't exist with strangers.

SR: I was thoroughly impressed with the way you draw from literary figures such as Lord Byron and Nikolai Gogol. How did the idea for the character of Byron Gogol come about?

AN: The idea for his character came from a lot of different places... I was also thinking about Christian Grey from Fifty Shades, and the sinister ways that power dynamic would likely play out in actuality. And I was thinking a lot about the ruthless qualities that often make CEOs so good at putting profits first-the megalomania, the sociopathic behaviors. The novel is largely about control and surveillance. Byron wants to put a chip in Hazel's brain that will allow him to know everything she thinks, sees, and does.

SR: Ms. Cheese is one of my favorite characters in the book. She‘s like that friend who says what everyone else is thinking. One of my favorite lines is when she tells Hazel, “I hope you win your soul back in a bet or something.” If you had a friend like Ms. Cheese, what kinds of advice would she give you?

AN: Wow, this is too real. Well. She'd tell me to grow up. To get my act together and stop waiting for a visit from the magic self-discipline fairy. "No one's coming to fix you," she'd probably say. Quit rolling around in the filth of your poor decisions. Quit soiling yourself with past regrets. You need to make more than one functional choice per decade. You need to be less ridiculous.

SR: One sentence that stopped me in my tracks was, “I have no idea how to live in a place I don’t want to run away from.” Is that a theme that you knew would appear in the book or did it occur organically?

AN: I knew that was Hazel's character. In situations where a healthy reaction would be, "This isn't working" or "This isn't meeting my needs," Hazel's the type to think, "Maybe this will get more bearable with time."

SR: Jasper’s love for dolphins comes out of left field and is hilarious. Can you tell me where the inspiration for dolphin love came from?

AN: I read an article about this book Wet Goddess-it's written by a man who claims to have had a "sexual relationship" (the article's terminology, not mine) with a dolphin. I don't know if I could ever read the book. The article haunted me. My brain kept returning to it. I knew I wanted Jasper's character to have a sort of reckoning with the way he uses women. Since Jasper wants nothing to do with romantic love, falling in love himself and being rejected didn't ring true as a parallel punishment. Having his libido hijacked seemed like it would be a far greater nightmare for the character.

SR: You make a few insect analogies in the book. Shedding disappointment “...reminds Hazel of tarantula molt,” Byron “says her name like she’s an exotic insect,” “low frequencies and their effect on insects.” Why are insect analogies apt for your particular characters?

AN: I think they feel so right because of the book's focus on these so-called intimate relationships (parent/child, husband/wife) where intimacy fails to appear. So the characters are watching each other with a sort of genuine curiosity as opposed to relating or being empathetic. There's that much emotional distance between them. A near-entomological gaze.

SR: In your interview with Electric Literature, you talk about fixed expectations for female characters. I also really enjoyed your honesty in keeping Hazel true to her character instead of trying to create a female character who is perfect by societal standards. She lies, steals, and is a terrible decision maker. Can you talk more about navigating flawed female characters?

AN: I just don't take a huge amount of comfort from redemption narratives. That's not why I read or why I write. I need art to cope with failure. I need art to cope with pain that doesn't go away. My four-year-old daughter loves the movie The Little Mermaid, and the other day I showed her a picture of genius author Samantha Irby's new Ursula hand tattoo. "I like Ursula," my daughter said, "but I like Ariel more." I said, "That's because you're young. You've got to live in the world for a second. Once you live in the world for a second, you'll worship Ursula."

SR: I find myself laughing at surprising moments in the novel. Little asides like Tiny saying he will have to burn sage in the dolphin tank and Hazel’s dad instructing her to make wide turns on the Rascal. In fact, that whole section with Hazel driving the Rascal had me in stitches. How do you develop ways that people gravitate toward small, immediate tasks instead of dealing with the bigger issues in their lives?

AN: I certainly don't model them on any of my own horrific patterns of avoidance! I just think this is true though. A lot of living is necessarily second by second. If you look ahead to the next minute, it would be too much.

SR: In an interview with BOMB you said, “If writing is like driving a car, reading is stopping to fill up with gasoline.” How have other writers influenced your process?

AN: I think in terms of content, I have to read in order to understand what's possible. These are magic moments-when I read something that dissolves a limitation in my brain. I was reading an essay by Carmen Maria Machado the other week where a specific topic that I've always felt the need to couch in really indirect language was positioned in a radiantly straightforward way. I had to read it being done to understand how it could be done. Masterful writing shows you new paths. Each paragraph in that essay expanded what I feel I can write about, and how I feel I can write about it.

SR: What is some specific advice another writer has given to you that has changed the way you look at writing?

AN: I think that sometimes great teaching is helping clarify for a student what their writing is doing and how it's working. During my MFA, when a story of mine was being workshopped in Michael Martone's class, he said, "Your stories are kind of like stand-up. You tell a joke in one paragraph, then the next joke is a new paragraph, and so on." I hadn't thought of it like that, but it gave me a whole new awareness of my style. It was exactly what I was interested in doing, but I didn't have any sort of conceptualization of it.

AN: I'm a sofa writer, a chair writer, a bed writer, a floor writer. The desk, to me, is just...it makes me panic. In my head, desks are where people sit when they work jobs they don't want to work. I have terrible posture and back problems because of this. At some point I'm going to have to recondition myself not to write all hunched over. But I'll put this off as long as I can. My favorite place to write is in front of a space heater. I like the white noise of it, and the warm air. I like having the fever-dream feeling.