"This Is A Nineties Love Story," by Sarah Pape 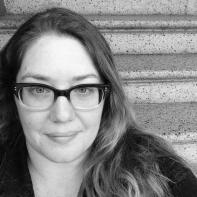 Sarah Pape teaches English and works as the Managing Editor of Watershed Review at Chico State. Her poetry and prose has recently been published or is forthcoming in: New England Review, Passages North, Ecotone, Crab Orchard Review, Bluestem, The Pinch, Smartish Pace, Hayden’s Ferry Review, and others. Her chapbook, Ruination Atlas, was published this year (dancing girl press). She curates community literary programming and is a member of the Squaw Valley Community of Writers.

This Is A Nineties Love Story

The first time I saw him was at a showing of the Rocky Horror Picture Show at a tiny art house theater. He was part of a pair, a best friend friendship, both tall and lanky with hanks of greasy hair pushed back from their faces. His buddy was outgoing and flirtatious. The one I wanted was in a wheelchair. He had a scraggly goatee and a white t-shirt gripping his taut biceps. He looked away when people talked, laughed at jokes with a sneer, popped wheelies like a nervous tick. I was rendered mute with desire.

A dialogue began in my head about what it would be like to date someone in a wheelchair. I remembered walking with my grandmother in hers, and recalled every small child’s stare as we moved through department stores, how I became an extension of her, my arms resolute and strong as I pushed her. I could see myself in his lap, laughing as he rolled us along; me, standing on the backstops as we careened down a hill. I pictured myself spread eagle over the armrests, letting his strong arms move me up and down.

After the movie, we milled around the theater, too young for much else, but not wanting to go, and without any fanfare, he got up from the wheelchair and pulled out a cigarette. It took me a minute to understand what was happening—The Rocky Horror Picture Show—he was dressed up as Doctor Scott. Great Scott!

What did I sense that first night in my keen animal state upon first meeting this aloof trickster? Something immediate. Palpable. He was the perfect blend of textures—prickling with sarcasm, long boy body loose and unrestrained, unkempt and sharp with sweat, yet sweet. Carry-something-heavy-up-a-hill-for-you sweet. Completely unpredictable.

We all worked at fast food restaurants and after our shifts we’d come together and fall into our nightly meandering. In a time before cell phones, we depended on a kind of social echolocation and predictable patterns. People stayed in familiar places in order to be found—parks, gas stations, diners. We relied on pay phones and home phones to check in with our parents.

Our group was an amalgamation of two groups, one from Oroville where I lived, and the other from Gridley, the next town over. My best friend had moved there and found the other kids who smoked. He was the middle of our Venn Diagram.

We wrote on each others’ arms and legs, drew long chains of flowers and spirals with Sharpies, half-dead Bics, watery felt tips, anything we could use to illuminate the flesh of the one nearest to us, thigh against thigh under the table, forearm resting against backs and biceps until our doodle was complete. All of our bodies felt permeable, barely separate from one another, but most of all, I wanted to be near this particularly watchful guy who never made a move on me.

What I remember most about those weeks is the range in our proximity. Like magnets, we collected ourselves into a group and moved over the landscape of our tiny towns in jerks and starts. There was the constant clatter of my best guy friend’s early guitar playing, diner booths and all of us crammed around a half circle, nursing our ceramic cups until curfew, leaving the waitress whatever coins we had left at the bottom of our boho purses. And cigarettes. So much smoke then, like a constant fog, everywhere—in buildings, parks, idling cars while waiting for the others to come out from their houses, into each other’s mouths, with our heads lying back on each others’ stomach in a long human ladder.

Even a month, in the obsessive heart of a teenaged girl, is a tiny eternity. It took time for the Trickster Boy and me to come together, even though it was apparent we would. What I didn’t know was that he was waiting to see if I would fall for his best friend first. Other girls had. His friend’s tactics were practiced and swung wide. It didn’t surprise me that he often hit something.

I’d had sex with my best friend, his best friend, and a boyfriend who was much older. I traded what they desired for membership. I was protected, fought over, and called from payphones to tell me where they were, when one of them was coming to pick me up, that they loved me. If there were a test to see if I would remain unaffected by a cute, troubled boy’s advances, I would probably fail.

But this time was different. I was utterly and completely devoted to the one who didn’t seem to want me.

The Trickster never tried to touch me, which was unnerving and welcome, his distance almost rejection, but not quite. His signals were micro, ensuring that only someone of the most observant type, the most true, would tread the private world of his mind. His best friend would do things like lift me up, put me over his shoulder and run around like a maniac, just so we would eventually fall into a pile, my body on his body. I would right myself, knowing that others were watching to see if we would get together, if his attempts were working.

I would look up, flushed from gravity, and the one I wanted would be watching. In those moments, I wanted to present myself to him: “You pick me up.” Even if I had asked, he wouldn’t have. He didn’t ask anything of me but to unfold myself at a slight remove.

Yet, walking up the road behind my high school toward Stoner Hill one day, I found him parked in his rust-colored Dodge Challenger, waiting for me. A little smirk took hold of his mouth when he saw me see him. It was like that. Slow, small gestures. Incremental wooing, as if he already knew we’d spend the rest of our life together.

One night, I waited in my car while The Trickster called his mom. Then I watched as he kicked the shit out of the telephone booth.

It was a rare moment, both that we were alone and that he showed such strong emotion. When he got back into the car, there was a thin layer of sweat across his brow. “Sorry, my mom accused me of smoking pot and I got pissed.”

“Did you?” I asked, genuinely not knowing. We had spent the last couple months together in groups, but I didn’t know much about him. I knew his family was religious and that his mom loved George W. Bush. (She had a signed and framed photo of him on the living room wall.)

He hesitated before answering, “I haven’t touched anything in two and a half years.” He looked out over the brightly lit Albertson’s parking lot, “She should know that.”

He told me about a place called the R-House, a rehab facility he had been let out of just six months earlier. He had gotten in some trouble drinking and had stolen a four-wheeler with friends. His mom allowed him to be punished to the full extent of the law. His roommates at the rehab were a collection of violent criminals and emotionally disturbed boys. He’d been there for two years.

“My real dad died from drinking,” he continued. We both gazed forward, the whine of my old tape deck straining into our self-conscious pauses. “She’s afraid I’ll turn into him.”

In those moments between his telling and my response, did I know I was choosing to love him despite the probability that he was not done? In my experience, you were or you weren’t an addict. I didn’t know anyone who had been, gave it up, then went back. I placed his father alongside the long line of addicts in my own family, and imagined he and I on the opposite side.

I had only caught a glimpse of his mother once from across the street while waiting for him. “That’s so fucked up,” I echoed, matching his disbelief.

We left the parking lot to pick up others from a diner where they were waiting for us. My mother agreed that everyone could stay late at our house, so we lazed around, my best friend on his guitar and a low hum of the others’ voices with periodic bursts of laughter. The Trickster and I kept holding hands, eventually leaving the others to sit in my bedroom.

We sat cross-legged, knee-to-knee. There’d been so few words between us and now everything was spilling out, for the first time everything being said, being heard. Our hands were clasped and resting on our knees, almost as if praying. Others passed into the room then turned quickly as if they were interrupting something private.

Sex would come later, but not much. He finally leaned forward and touched his lips to mine, lifted his hands to my face.

This is where we began. Where our damage matched up and made something else, something good. When we finally unhooked our hands and stretched out our legs, dawn was breaking outside. The first beams of light casting blue.

‹ "Beagle in the Road," by Sarah Beth Childers up "My Brother's Body," by Sharon Horne ›