"Beagle in the Road," by Sarah Beth Childers 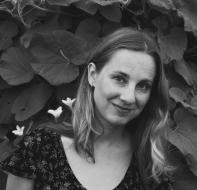 Sarah Beth Childers is the author of the memoir-in-essays Shake Terribly the Earth: Stories from an Appalachian Family (Ohio University Press, 2013). Her essays have also appeared in Brevity, Pank, Guernica, Quiddity, Gravel, and The Colorado Review. A West Virginia native, Sarah Beth lives with her cat and Boston terrier in Stillwater, Oklahoma, where she writes, quilts, sails, and teaches creative nonfiction at Oklahoma State University. She is working on a memoir about her brother Joshua, who committed suicide in 2012.

Beagle in the Road

I’m thirteen years old in the West Virginia summer and my beagle has bolted out the kitchen door. She’s plump but young, nearly impossible to catch: she runs faster at the sound of her name. Barefoot on the concrete steps, I yell anyway—Kassie!—and watch her speckled white legs pump harder under her lozenge-shaped body, skidding on the left turn from our steep gravel driveway onto the one-lane asphalt.

Kassie always turns left when she escapes, even when her ultimate destination lies to the right, the woods at the end of our dead-end street; or straight ahead, the cow pasture beyond a few dozen three-bedroom houses; or straight back, behind our backyard, down a ravine to Twelvepole Creek. She follows the path our family car takes when we load up and disappear for hours or a whole day, leaving her to watch from her backyard tether. Left leads out of the Twin Valley neighborhood to my piano teacher’s studio, to my grandparents’ pool, to the Cincinnati Zoo. With a left turn, Kassie could go anywhere.

Normally, I let Kassie explore on her own when she escapes, settling on the child-stained couch with a book while my mom calls down the driveway, “Have a good one, honey,” and slams the door. But this time, I put on my flip-flops and run. This time, it’s my fault—Kassie burst out when I came in with the mail—and I need a break from Nancy Drew. I might as well witness a day in the life of a loose beagle.

Kassie trots ahead of me, copper nose on the ground, white-tipped tail up like a flag. Now that she’s made her customary left turn, she prefers a path across our neighbors’ hilly front yards. Every few feet, she stops and looks down at me over her shoulder, my bug-bitten legs and my flip-flops flapping across the asphalt. She’s making sure I’m too far back to grab her collar, and she’s making sure I’m still there. Satisfied, she puts her nose back on the trail: a raccoon, an opossum, a neighbor dog, a kid with an interesting sandwich. She reaches an unmown vacant lot and trots with the confidence of her British beagle ancestors, tail tip bouncing above the weeds.

I’m happy too. Today I’m Kassie’s chosen companion instead of a weight on the other end of a leash, restraining her movements most painfully on garbage day. I don’t normally feel close to this dog, an animal that lives to escape and overeat. For Kassie, I’m the girl who buries her mother’s under-seasoned chicken dinners in the dog food bowl, who closes the door too slowly when she gets the mail. I’m jealous of my cousins’ genuine friendship with their golden retriever. But today I understand why my dad stopped the car at a hand-painted road sign that advertised baby Kassie: “beagle—gun dog for sale.” I understand what he felt as a child when he spent afternoons with Bud, his thirty-years-ago beagle, along the Ohio River. David caught dragonflies and fished for bluegill, and Bud disappeared into the woods along the riverbank, reappearing when the scent trail led out of the woods, when he needed to make sure his boy was still there.

Kassie emerges from the other side of the vacant lot, and she has a choice to make. She can turn left, over the neighbor-yard hill into woods and, later, a horse pasture; she can turn right, down a quiet road with a dozen more houses, trash cans, neighbor dogs, and cars with dog pee-scented tires; or she can head straight, toward the neighborhood exit onto Walker’s Branch, a winding road drivers take at fifty miles per hour despite blind spots every fifteen hundred feet. People only walk Walker’s Branch when their cars break down, and they pray every moment they’re walking. Kassie heads straight, faster now, the trail’s getting fresher. Five hundred feet from Walker’s Branch. I follow, screaming her name, scuffing my toes on the road.

As I run at my top P.E. class speed, chasing after this twenty-five-pound hound that’s trotting merrily toward an intersection, I’ve forgotten the happy Bud stories my dad tells me when we walk Kassie by the Ohio River. Now I’m imagining Bud’s awful end. When my dad was thirteen, exactly my age, his family moved away from the river to a house with a fenced-in backyard. Never again would Bud mope in a concrete-lined, roofed pen until David came home from school. He’d bark at cottontails, dig up flowerbeds, nap in the sun. But the day after the move, Bud escaped. Maybe my dad’s brother left the gate open, or maybe Bud dug under the fence. This much is sure: Bud nosed a trail out of the neighborhood onto a busy road, under the wheels of a delivery truck. I think of my dad’s grimace as he tells the story, of young David running to his broken dog, of how it took Bud a few minutes to stop breathing.

I keep hoping Kassie will turn around, back into our land of tricycles and parked cars, hoping whatever she’s tracking turned back into the neighborhood hours before. But she trots on, past the penultimate house, the last house, the Twin Valley sign, to the end of her trail. Kassie sees her quarry before I do, and she smells it before she sees it. Early this morning, an opossum must have moseyed across our neighborhood and met his maker on Walker’s Branch. Kassie claims a tracker’s prize: a roll in opossum innards, belly up, in front of the worst blind spot on the road.

No cars are coming right now, but I know this could change any second. To the right of the Twin Valley entrance, Walker’s Branch is relatively flat, and I can see for a few hundred feet. To the left, Walker’s Branch disappears down a steep hill, plunging to a convenience store. Cars often appear out of nowhere at the top of that hill, hitting the gas at the flat spot at the top instead of slowing to check for animals or left-turning minivans. At fifteen, when I’m learning to drive, I’ll scream on that turn for weeks. Today, my beagle lies in the path of those magically appearing cars, and I’ve made a decision. This is NOT the place or time she’s going to die.

My dad will not come home from the chemical plant and bury a squashed beagle under the oak tree. My dad and I will put Kassie on a leash for years and years and walk her around our neighborhood, through state parks, and along the river. She will die as an old dog in a sunny patch in the backyard. I yell Kassie one more useless time, then I follow her onto Walker’s Branch.

No cars are coming right now. I feel like everything except Kassie and me has frozen, that the dragonflies have stopped midair. I squat and tug on Kassie’s grimy blue collar, and she refuses to get up. All four paws in the air, eyes closed in ecstasy, body wriggling in intestines and blood. I stand upright for a couple of seconds, so a driver could see me if she happened to appear, then I reach down and drag my beagle by the collar off the opossum, off of Walker’s Branch, back into Twin Valley. When we leave the road, time unfreezes, and I hear traffic again on Walker’s Branch. Since I have no leash, I have to bend down and walk a quarter mile with my hand on Kassie’s collar until we reach the safety of our kitchen.

Later that evening, after my dad turns into our intersection, passing only a dead opossum, and after my chicken breast is inside Kassie’s stomach, my dad stands up from the kitchen table and asks me to get the leash. “That beagle looks like she could use a walk,” he says, and she does. Kassie jumps out of her dog bed and wiggles all over, wagging her bum and belly along with her tail. I’m sure she knows the word walk, but she doesn’t need that word to know a walk is coming. Something in our movements—in the way I put on my flip-flops, in the way my dad stomps around searching for his baseball cap—causes her to bounce and cry until she’s leashed and sniffing down the road.

My dad takes the leash, I carry the empty paper lunch sack, and we keep to the roads inside the neighborhood. As I chatter about the books I’m reading, the guppies in the backyard pond, my fears for the first day of school, I stare at Kassie and smile a secret smile. This dog is alive because of me. I’m proud of her wholeness: her unbroken legs that trot next to my daddy, her unburst belly that jiggles with each step, her unbloodied ears that nearly graze the ground as she explores the neighborhood with her nose.

Somehow, though, I keep my pride to myself. As my dad walks down the road, chuckling at my jokes, pointing out bluebirds and chickadees, I can’t bring myself to boast about the fact that I boldly risked my life to save the family beagle. I have a feeling he’ll miss the story’s happy point and get stuck on an image of horrible possibility: his Sarah Beth in the intersection, flip-flops gone, blood caked on her cotton shorts and blond hair. In my thirteen-year-old mind, dying for a dog feels heroic, but I can’t trouble my dad with the idea that he might have had to live on without me. Replacing utterly that memory of smashed Bud with a memory of his smashed little girl.

‹ "Hope Chest," by Ramona Reeves up "This Is A Nineties Love Story," by Sarah Pape ›