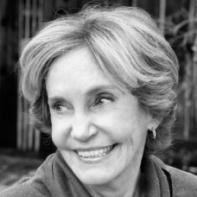 Liz Valdez and her five children always sat in the same pew—the first one to the right of the altar. Since Liz has been excommunicated, so to speak, that pew has remained empty; sometimes newcomers to St. Stephen’s Episcopal don’t know any better and sit down there and then Lamond or one of the acolytes has to take them aside at Coffee Hour and explain that it upsets the rest of us to see that pew occupied. Oh, one visitor from Memphis said, without, as far as we could tell, any sarcasm at all, is that space sacred? and Lamond almost choked, you could see him getting red above his surplice and Nonono, he said, it’s not sacred, it’s just…(poor Lamond, he should never have been chosen to replace young Father Dressler) it’s just special.

Liz Valdez was special, no argument there. Not beautiful but, as Dr. Wolcott said, no one ever looked at her just once. Something about her made you stare. Not tall, not thin, not well dressed in her raggedy hemmed dresses, but there was some serious fire in those brown eyes and her lips looked, and I say this as a happily widowed eighty-year old woman, delicious, a plump red candy heart stuck right underneath an unremarkable nose and above an already falling-down chin. None of us ever saw a Mr. Valdez and he may not have existed. None of Liz’s kids looked Latino, in fact they could have been a litter of mongrel pups, all shapes and colors. Little Otto, well, he was a black boy, but his sister Madelyn was a redhead, the twins were practically albinos, and Paulie, the youngest, I swear Paulie was Asian. Four different fathers and none of them a Valdez is my guess but I never had the nerve to ask Liz and no one else did either.

Bill probably did, Bill Collier, the now-ex-choir master; when Bill was still with us he was pretty outspoken. Liz was painting houses when she first came to town and Bill’s wife Merlee hired her to do the front porch, God knows why, pity probably, Merlee always had a soft heart for strays.  So Merlee goes merrily on teaching Fifth Grade at Harrison even though Bill’s at home with a back injury practicing his organ, excuse me, and next thing you know Bill is announcing he’s fallen in love for the first time in his life; he posts Liz’s face all over Facebook, hires Rick Cordova, the crop duster, to skywrite her name over the mall, and no one is surprised when he buys a triple-wide and Liz, Otto, Madelyn, Paulie and the twins move in with him, leaving poor Merlee stuck with a wet porch that needs at least two more coats of Sunny Day Yellow before she can even walk on it.

Soon there’s a wedding and Liz wears, are you ready? White. Bill is all tender and nervous, the kids are dressed like little dolls, Merlee is weeping in back of the church, the choir is nervous and off key, the rest of us are sort of confused but the ceremony is right here at St. Stephen’s and we wouldn’t miss it for the world. Young Father Dressler, Bill’s best friend, says it’s a miracle that two such sad and lonely people have found each other and his blessing is full of heart and soul, though he has to raise his voice over Merlee’s sobs.

Time passes. Liz never misses a Eucharist and though she’s busy painting houses all over the county with a team of teens that Stan the Youth Leader cobbled together for her, she still finds time for the Monday yoga and Thursday meditation classes and twice a week she helps out in the kitchen with the community meals. Bill’s back is still too bad for him to conduct the choir, so Stan steps in and we don’t have to wait long for the next act. There’s Stan’s fiancée in the Wal-Mart buying nine rounds of ammunition, there’s Stan in a new leather jacket tooling around in a Honda motorcycle with Liz in back, there’s Bill hitting the Main Street bars. Pretty soon Bill and Liz are going to couples counseling with young Father Dressler, pretty soon Stan is going to couples counseling with them, pretty soon Bill stops going, pretty soon Stan stops going –pretty soon Liz keeps going – and keeps going. Every. Single. Day. Mrs. Manis at the parish desk isn’t nosy exactly but she did tell us young Father Dressler’s office door stayed locked during those sessions and that the only sounds she could hear, not that she was listening, were not the sounds of two people praying.

Young Father Dressler, poor dope, comes clean to the congregation soon after; all shy and pitiful he announces his feelings for Liz, and asks her to stand up in the front row. She does, hair a rat’s nest like always, faded sundress of some sort, and the little dog pack rises with her. Father Dressler asks us to accept Liz as his intended though he has to raise his voice to be heard over Merlee’s laughter. Stan was long gone at that point; he’d left his fiancée and gone up to Oklahoma City, and after the divorce Bill disappeared too, someone said he’d found a job with a church in Missoula, someone else said he’d moved down to the Delta and started to work on a fishing boat though how he could do that with his bad back, the poor guy could barely move, none of us could figure out.

Another wedding, this time at city hall, because Mrs. Manis’ petitioned against having it here in the sanctuary. Soon after the ceremony, Father Dressler’s sermons began to take a serious turn toward the dark; he no longer inveighed the Holy Spirit or enthused about the Sacred Dance of Love but started sounding like a Baptist, ranting about the Devil and the dangers of lust, and then, three months later, the police get a phone call, a man’s voice whispering that there would be a dead body by the lake in ten minutes because he’s about to shoot himself and to please come get the corpse before some hiker stumbles over it, so Jimmy Doherty and Cal Perron race out there, sirens blaring, but too late, young Father Dressler is curled at the foot of the biggest oak tree looking, Cal said later, like a little boy taking a nap.

No note, no reason, and although Dr. Wolcott has suggested there may have been some funny business on Father Dressler’s computer – child porn is Dr. Wolcott’s guess – the mystery remains unsolved. Liz kept coming to St. Stephen’s as if nothing had happened and that’s when Lamond had to tell her she had to go. He told her the parishioners didn’t want to see her which isn’t really true, we’re more or less fascinated by her. I think the truth is he doesn’t trust himself to see her kneeling before him at the communion rail with those candy colored lips pooched out and those dark eyes firing crotch shots. Liz didn’t protest, she was about through with this town anyway, and she and her kids go to St. Jude’s United in Harrison now and from all I’ve heard they are doing fine. There are always rumors of course and I suppose it’s possible she could be pregnant with Dr. Wolcott’s baby or she could have won that scholarship to divinity school, but the only rumor I believe is that she and Merlee are now an item. Mrs. Manis heard that the new African rector at St. Jude’s plans to hold a commitment ceremony for them soon, and when she told us that we all clasped hands and bent our heads and prayed, not for Liz or for Merlee, we have faith in them, but for that poor young man from Nairobi who has no idea what he’s in for.

‹ "Counterbalances," by Michelle Ross up "Heat," by Peter Makuck ›