"The Things That Will Shape Us," by Jenny Ferguson 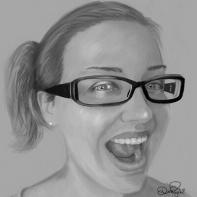 Jenny Ferguson is Métis, an activist, a feminist, an auntie, and an accomplice with a PhD. She believes writing and teaching are political acts. Border Markers, her collection of linked flash fiction narratives, is available from NeWest Press. She lives in Haudenosaunee Territory, where she teaches at Hobart and William Smith Colleges.

The Things That Will Shape Us Under the Surface

I’d always had an exaggerated passion for horses and in high school, when I was in love with a guy who channeled Carly Simon’s kind of vanity, I fell in love at the same time with his ugly, white ‘stang.

Like all Canadian men, who when they were young, resolved on the very first New Year’s Eve they celebrated to become hockey players, he was missing two front teeth.

Yes, we are all clichés.

Once we accept this, everything comes with a side dish of irony, and beauty, and openness.

I’ve always had a thing for words, for stories, and for storytelling. I don’t consider myself a liar—but I know how to craft one, and how to nurture a lie until it sheens like life.

As a writer, for me, this thing we call subtext comes about under the surface: it’s something I’m not consciously thinking about as I create. On the other hand, when I revise, I’m looking for opportunities to unearth the sub-textual hints I’ve dropped without realizing I’ve left them there.

Peter Turchi in his fantastic craft book, Maps of the Imagination: The Writer as Cartographer, suggests that writing and mapping are parallel acts. Of course, thinking of the plot of a novel as a kind of map works. But so does considering say Michael Ondaatje’s human rights novel Anil’s Ghost or James Welch’s wonderful Winter in the Blood or master Joan Didion’s The Year of Magical Thinking as maps of the experience of grief. After all, Turchi reminds us that maps are about organizing “information […] in order to see our knowledge in a new way.” That might sound grim when we’re talking about art, and about love, but please do stay with me.

The grim is beautiful and true, too.

Now, that boy I knew at sixteen, he’s married.

This buddle of facts convinced me to buy my first car from a flags-in-the-wind, yes-yes-all-reasonable-offers-accepted discount lot somewhere close to a town named after the place where Will Shakespeare was born.

And for some reason, a car that came equipped with a list of things I had to fix before it would pass the safety seemed like an honest one.

When the dealership salesguy came back from his trip to the local registration depot, he held a license plate that in the random lottery of distribution of license plates, in the random-permutations of letters and numbers and universal fabric, had my name on it.

There are surface maps, and subterranean maps. The subtext shows up on both levels, in different bouts of clarity.

Maybe subtext appears in the blanks of a map, the in-betweens.

Louise Glück, speaking of George Oppen’s poetry, says, “I love white space, love the telling omission.” I want to suggest that what Glück is saying translates wonderfully to life, and to story, when we’re talking about the unspeakable, that thing we call subtext.

Hemingway’s often quoted “Iceberg principle” comes into play here as well. It’s another way—a structural way—of thinking about subtext. The bulk of our stories and our beautiful, resilient lives remain in the realm of the unseen—and what bubbles up, it’s the part floating on water, the part of the iceberg that’s melting, in warmer and warmer still, air.

My mustang is red, fast enough to thrill me, and properly old. But, I must note, not old enough to be worth anything to anyone but me. It’s the only pony I’ve ever owned that I can ride. Those other ponies in bright colours that taste of plastic, not dust, are packed away in a Tupperware box so the mice can’t make homes in that plastic hair, against those plastic wings. Those other ponies are waiting for something. A purge, like the kind that comes on once in a while, out of nowhere, fierce and heartless. A child to discover them and think retro or think not all presents come wrapped in those store-shelf boxes, think this plastic taste is heaven.

The mustang reminds me of sixteen and of this one guy who over the years has gained weight, while since we’ve last seen each other, I’ve lost it. This fact makes me worry we’re connected on an almost ugly level. Like symbiosis. Like witchcraft. This fact reminds me I’ve watched too much Sci-Fi TV, cared too much for those everyday, awesome (in the old, the true sense of the word) magics.

In the real world, trivial things separate us now. A whole country, from coast to coast. His wife. His delightful child. His politics.

Oh, and sixteen or so years, and all those clichéd moments in both of our separate lives, and mostly everything you can imagine.

This story isn’t going where you think it is. This is not your mother’s mac and cheese, studded with chunks of tomato and bacon. This is not comfort. This is not a happy-ever-after, some kind of wish fulfillment, or nightmare unfolding in a dreamscape. This is a story about a car. About sixteen and about thirty, about what shapes us and what we shape inside ourselves for better or for worse.

In The Art of Subtext: Beyond Plot—which is part of the Graywolf Art of Series—

Charles Baxter, says this book he has written is about “those elements that propel readers beyond the plot of a novel or short story into the realm of what haunts the imagination: the implied, the half-visible, and the unspoken.”

I want to leave this here.

I’ve learned I feel too strongly. I took this test once, and it confirmed everything about the dark inner parts of me, and that’s how it confirmed what you see of me too. Myers-Briggs, ladies, you are both my horror and my lightning bolt. One day, I might tattoo INFJ on my wrists. I might do this, one day, before this is what we’re all doing to align ourselves, to find each other.

And yes, you’re reading between the lines now. I’m not talking about the boy—married now, a father now, an uncle now—but the mustang. Not his, but my own.

Before I let you out of this subtextual place, before I free you, and you can choose what to see and what maps to follow, I want to share this, something I really love: Baxter says, “A slippery surface causes you to skid into the subtext” as if it’s gaps, or blanks, or ruptures, or uneven, heavy, bulking moments—emotional, formal, or thematic—that drive readers to the subtext, that drive sixteen to thirty.

It’s nice to think that those rough places in a story, in our stories, in our lives, can be openings.

It sits in the driveway, snow-covered these days.

My sight-hound stands at the door, his eyes trained on something I can’t see.

The road is waiting. The hundreds of pounds of bagged gravel on the rear wheels will weigh me down—or should—just enough for me to stick to the pavement. But—there’s always a but at the end of stories—can I trust it? can I understand the science? the magic? the pull and the push? and the unknowable?

Day breaks over this valley. In a little while, the cows down the hill will stir, and so will the eagles who are known to hunt the neighbourhood chickens and pet cats, and if I’m lucky, the wind rustling the poplars will melt the ice on this ground.

‹ "Waiting for Blossoms," by Diane Payne up "What Happens Next," by Joni Renee ›