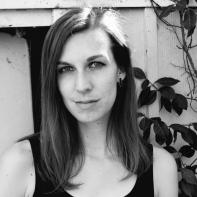 Anne Barngrover is the author of Brazen Creature (University of Akron Press, 2018) and Yell Hound Blues (Shipwreckt Books, 2013) and co-author, with Avni Vyas, of the chapbook Candy in Our Brains (CutBank, 2014). Her poems have appeared in Ecotone, Crazyhorse, Copper Nickel, Indiana Review, and others. Anne earned her MFA from Florida State University and her PhD from University of Missouri. She is an assistant professor of creative writing at Saint Leo University and lives in Tampa, Florida.

beautiful in that way. Sometimes things get ugly         when I’m too close and other times the ugly

Still, I am trying to understand why
I’ve ignored those oysters of light

that wink among tree shadows
until they tremble in a strange tide.

The moon draws salt crescents on the sidewalk
as though a child, and I’m well-aware

of any crowd. I’m not here for good
vibes, though I’ve learned to keep

this to myself most of the time.
Sensitivity to lunar nodes is not a great way

to make friends, and I’m the one whose glands
ache from a hangnail or sty. But flowers close.

Spiders begin to undress their orbs,
hippos return to their night islands

and bees fly back to their hives (cows don’t
give a shit, true earth signs) and lemurs freeze

in their perches, so then why shouldn’t I?
Even Christ was born from a star and died

in celestial darkness—torn cloth, torn sky.
Why do I hear all the clocks ticking at once

while everyone else seems fine?
I am trying to understand the difference

between fear in the body and fear in the mind.
At a protest in Nashville, I held up a sign

that said Rise Up and a man
screamed at me, There are only two genders!

his face ecstatic as a split plum. I refuse to believe
that a fear of circles is the same

as a fear of holes. I felt sorry
for the violent binary of his life,

eight and nine and ten inside.
But maybe my younger selves always lie

shingled in wait for me to gaze up and find
that delicate smile brimmed with blood.

This is real wonder of it all:
a primeval fear locked into my mind

unloosened by patterns, logic, or rhyme
that thrills me from my hiding place

out into a world of change.
How ancient my brain! How animal and alive!

Florida summer, rain thrashes one side
of the parking lot while the other side stays dry.

though others merely sway, thick bouquets
of green garden rakes. I wish I could stop

wondering if the men I’ve known have
or haven’t changed. What makes me think

this matters? Once I fell asleep in the arms
of a man I loved, and within minutes I began

to scream. How does plot move that fast for you?
he asked, irritated, but I couldn’t find an answer.

With him, doctors warned me to slow down.
There was damage only a microscope could tell,

or maybe a telescope—planetary evidence
in my cells. Truth be told, I hate the bravado

of a barbecue, the charred sawdust smell
at Home Depot, handy work to plan and dread.

Fireworks are nothing to me but great,
gulping mouths. Their jaws unhinge, and throats

widen to jars, buckets, then wells. Even stars
can get swallowed whole. Be American,

dammit: the moon explodes for the finale
this time around! Each year needs to be louder

than the one before. The opposite of red,
white, and blue is a bleached animal spine

I come across in a field beside the road.
Sometimes we can map the past so clearly

we don’t need to wonder anymore:
a small body, car, then a bird of prey

that stripped flesh and fur, left only
what couldn’t be devoured. Call it simple

logic, call it cause and effect, how lately I bite
my own tongue to force myself awake,

not knowing if the pain comes from a dream
or is real till I put my finger to the blood.

‹ A Poem by Angie Macri up Three Poems by Caleb Nelson ›