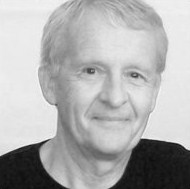 Peter Makuck’s fourth collection of short stories, Wins and Losses, was published in 2016 by Syracuse University Press. An earlier collection, Costly Habits, was nominated for the Pen/Faulkner Award. He has three times received honorable mention in Best American Short Stories. One of his stories, "Filling The Igloo," was included for The Best of the Southern Review. His poems and stories, essays and reviews have appeared in The Gettysburg Review, The Hudson Review, Cimmaron Review, Yale Review, and others. He is Distinguished Professor emeritus from East Carolina University where he founded and edited Tar River Poetry from 1978 to 2006.

Out of the Food Lion’s air-conditioned chill, I pushed a cart full of groceries. The parking lot was a steam room. The morning weather report said afternoon temps would be in the mid to high 90s. I had forgotten my sunglasses and squinted against the brightness. A motor started in the distance. A fan belt screeched nearby. Then it was just the metallic rattle of carts being pushed to and from cars. Trunk lid open, I’m emptying my cart when three loud bangs hit the air. Close by. Not gunshots—I know guns. I look around. Two rows away, a guy hits the passenger window of a black GMC Yukon with a baseball bat. The glass doesn’t break. A woman is screaming. People stop pushing their carts and just look at the Yukon, as if at some kind of street theater. The woman next to the Yukon has blond hair. She’s wearing white shorts and an army green tank top. She screams, “Our baby is inside!  Can anybody help break the window?”

I run to the husband, a tall young man with short black hair. “If you got something better than that guy’s bat, do it,” he says. “Hit the passenger side. Baby’s on the driver’s side in the backseat.”

I tell him I’ll try to find something.

I’ve got my wife’s car and have no idea where the lug wrench is or if it could do the job. No other tools in the trunk. An employee in a blue Food Lion shirt comes running with a scissor jack and bashes it against the window three, four, five times. Car windows and windshields used to break so easily. I can’t believe it. People are standing around. One woman is taking pictures with her cell phone. Behind her, in the next row by the cart return enclosure, there’s a guy at the open hatchback of his rusting PT Cruiser. I run over and ask if he has a tool that could break the window of that Yukon over there. A kid could be suffocating inside. He stands up straight, bald, and a bit shorter than me. A wide face, a deep cleft in his chin, small ears full of gray hair. In his cargo space there are lots of tools, an old soda crate full. I notice a jumbo ball-peen hammer that should do the trick. I lean in and point. “That hammer’s perfect,” I say. “That’ll break the window.”

He grabs my right wrist. “Nobody touches my tools.”

“Fine, you break the window.”

I smell booze on his breath. His teeth are almost brown. He’s strong and still has my wrist. Looking down at his hairy fingers, I snap up my arm, punch him in the gut with my left, and shove hard. He staggers and bangs his head on the trunk lid. Red in the face, he starts to come at me. I point and tell him I will put his fucking lights out. Over his shoulder I see the woman aiming her cell phone at us. My knuckles are no good any more, arthritic. It’ll have to be a head butt, an elbow, or a knee to the gonads.

“Nobody touches my tools!”

“Tools are more important than a baby’s life, you piece of shit!”

The woman with the cell phone gets closer and yells, “Give him the hammer!”

“Give him your hammer!”

He bellows, “Call the cops!  That’s why we pay taxes.”

Just at that moment, I hear approaching sirens.

I’m a high school teacher. All I need is footage of this incident to show up on You-Tube or Facebook. The flashing blue and white police lights pull up to the Yukon.

“You are a pathetic human being,” I say.

He shows me his fist. “You want a taste of this, pal?”

The woman laughs and gives me a thumbs-up.

I turned and walked to my car. The chocolate ice cream was probably soup by now. I wondered how the cops would break the window or unlock the door, but I had to get out of there before things got worse with the tool guy. He was standing in my rearview, staring at me. I felt like running him over. My chest was heaving, as if I had just finished running a marathon.

Nothing of the green-blue ocean or the colorful sails that I always enjoy looking at on the way home stayed with me. I just hoped the cops got to that baby in time. Next thing I knew I was in our carport, sitting at the wheel, and finally aware of chamber music playing on a Sirius station.

In the kitchen, helping me empty the grocery bags, Meg said, “What is it?”

“You’re kind of jumpy, and have a huge scowl.”

“Nothing. Just thinking about something.”

“Nothing,” I lied. “Thinking about a book I’m reading.”

“Great. Let’s try it with dinner. I’m going to make some shrimp pasta.”

I used to have a hair trigger. Years ago, Meg and I were at a party and I got into a fistfight with some loud mouth, good at insults. So I kept the parking lot scene to myself, but wine didn’t calm me down. The local late night news had the story. The baby was rescued, no problems. Exhausted, I took a shower and went to bed. There was a moon, the street silent, only the soft repetition of waves from the ocean made its way into our room. Meg said goodnight and was quickly asleep. I lay awake for a long time, seeing that guy’s face, the chin dent, and those hairy ears. A ball of hardness grew in my chest, a burning stone of hatred. Minou, our calico, minced into the bedroom, jumped up on the windowsill, and sat there looking out, perfectly still, and made me envy her Zen calm.

Heat had ebbed from the air. An offshore breeze came at us as we headed toward the beach on the wooden walkway through the dunes. We sat on a bench overlooking the ocean. A few surfers were riding the big waves. The light was low. Color changed at the tops of clouds: gold, rose, lilac.

“Remember a few days ago when I came in with the groceries and you asked me what was wrong?”

“You said you were thinking about a book.”

“In a way I was, but I lied.”  Then I told her about what happened in the Food Lion parking lot, leaving out a few shameful details. “I hadn’t punched anybody in almost thirty years.”

She shook her head. “He might have been a drunk.”

“Why couldn’t the parents open the car?”

“Somebody said the keys got locked inside.”

“I don’t know what else you could have done.”

“If the cops didn’t arrive when they did, I’d probably have done whatever I had to, punched him again, grabbed the hammer, and broken the window. Or tried.”

“What if he had a gun?  Nowadays everybody has a gun.”

“But you did before we got married.”

“And you civilized me.”  She laughed. “I tried. Look, two dolphins just leaped beyond the breakers. Good luck sign.”  The breeze lifted her dark hair. I could see her earrings, small silver sand dollars.

“What bothers me most,” I said, “is that in some perverse way, punching that guy was fun, that moment an adventure. I felt very alive. But, worse, my reading had no effect on me. Suzuski, Lao Tsu—all the books that talk about control being everything. My practiced image of the Buddha went out the window in less than two minutes.”

“Primal instinct always kicks in,” she said. “The baby is okay, and nobody got hurt. You know what’s best?”

We just sat there, watching the waves as they practiced their rhythm against the sand. A V-shaped flock of pelicans effortlessly glided overhead without even moving their wings.