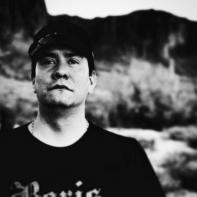 BOJAN LOUIS is a member of the Navajo Nation — Naakai Dine’é; Ashiihí; Ta’neezahnii; Bilgáana. He is a poet, fiction writer, essayist, and Poetry & Production Editor for RED INK: An International Journal of Indigenous Literature, Arts, & Humanities. His first poetry collection, Currents, was published by BkMk Press in Fall 2017.

This interview was conducted via e-mail by Interview Editor Tonissa Saul. Of the process she said, “Bojan Louis's collection, Currents, is simultaneously vibrant and ethereal. His poetry is executed with careful thought toward the energy and atmosphere in each piece.” In this interview Bojan Louis talks about connecting with other artists, music, and the catharsis of destruction.

Superstition Review: It was so wonderful to attend your reading and master class at ASU last week. You mentioned in your reading that you completed a residency at the MacDowell Colony. Can you talk more about that experience? How did it help you to pursue your creativity?  What kind of connections were you able to make with other writers?

Bojan Louis: At that moment, back in 2011, it was the first and only residency that I applied for. How it came into my radar I’m not entirely certain. I suppose one of my mentors brought it to my attention. Cynthia Hogue or Melissa Pritchard. Simply put, it was life changing not only in terms of the realizations I came to in regards to my writing but my, then, current life situation. The MacDowell Colony is a unique place steeped somewhat in mystery and misconception. I thought I’d be one, if not, the youngest person there. An aberrant minority among older white artists. I was wrong. I was afforded the time and space to destroy and rewrite completely, for the second time since earning my MFA, my fiction collection. Something wasn’t right about it, I wasn’t getting the narratives I wanted. I’d write fiction from sunrise until an hour or two before dinner and then run or drive to the gym with my workout partner, a journalist and former doctor. Late at night is when I’d work on poems, a complete disconnect and lack inhibition.

I certainly chatted and connected with other writers but we’d all say similar things, have similar hang-ups and uncertainties. What excited me most about the MacDowell Colony was that it was interdisciplinary. I connected with painters, multimedia artists, musicians, etc. Honestly, I hate speaking with only writers, it’s all too often the same commiserations. My interests and inspirations are much broader than literature. Art and music are huge for me. My dad’s an artist and I love museums. My mother is simply a badass and I have to follow that example. I played music before I was a writer or wrote. At the MacDowell Colony, I had a guitar with me and there was a baby grand piano in my studio. I have to play music in order to write and vice versa. I don’t always see or need a connection to other writers. Sometimes I just need to create using other tools.

SR: You graduated with an MFA in fiction but have published a book of poems. How does your writing process differ between the two?

BL: Unfortunately, an MFA defines you. Such is the “academy” and the need to categorize and identify perhaps. I honestly don’t know how one is without the other. I want to be a writer so I write. Everything. I have high ambitions but little time. I work on everything all at once. It’s usually deadlines that steal my attention toward one genre or the other. And as of late, it’s been poetry, though I publish a story or essay maybe once a year. But that largely goes unnoticed.

SR: Sections of your poems are written in Diné or Spanish. How did you decide which ideas you wanted to express tri-lingually?

BL: I was caught in the moment or solicited for a certain type of piece, which I see as a challenge akin to learning a guitar riff months beyond my stamina or ability. It’s also a reclamation of being and existence perhaps years away from my current fluency and knowing. It’s the future of the past. I think the poems decided and I said, “Ok. Maybe. Let’s see how it goes.”

SR: In the notes at the end of Currents you list a number of religious texts that influenced your work. What about religion inspires your writing? How do you work with the mix of different beliefs within the text of your writing?

BL: Religion, for me, is often a thing of destruction. Faith, creation, and deities have always fascinated me in that humans are poor conduits of some ethereal, unseen thing. I have faith but no religion. There is the earth and all its things and the failing notion of something greater. Like any other writing the stories fascinate me and like anyone I interpret them in the moment they require interpretation.

SR: A couple of times now I’ve heard you say that you burn your work when you are dissatisfied with it--as long as it’s backed up. How does this prepare you to move on with revisions?

BL: It’s cathartic. Sitting by a fire and burning shit engages a sort of youthful nostalgia and to watch something you made burn is relaxing. It’s a release, a transition to smoke and ash. I’ve also burned stuff I never backed up. Journals from childhood, high school, etc. Those versions of myself are dead to me and I stand on a pile of them.

SR: You’ve mentioned the liminal space between the moment the electrical current leaves its source but right before it connects to its destination. What is waiting for you in that space?

BL: It’s a moment of silence and emptiness. Power is neither here nor there. It is the abyss. Nothingness is waiting in that space and that seems fine.

SR: You have been working as the Poetry and Production Editor for Red Ink: An International Journal of Indigenous Literature, Arts, and Humanities. How has your editorial experience shaped your work as a writer?

BL: That’s a hard one. It’s more often the case that being an editor disrupts my work as a writer. Especially, around the production to print time. But in other ways it allows me to read harder, to seek out more voices than the ones within easy reach.

BL: I often, now more than ever perhaps, listen less to what writer’s say and focus more on the work itself. I don’t teach creative writing so I don’t get involved in all the craft business. I also don’t always trust what writers say. We’re all liars to some degree writing under the guise of universal truth or experience, which sounds like a huge lie. I reflect of my training and work as an electrician. Focus, don’t fuck up, and it’s probably going to be longer day than you think. Which has suddenly reminded me of something somewhere Louise Erdrich said about tying herself to her chair or desk in order to get the words on the page. So something to that effect.

SR:  In “Ko` doo leeschch’iih,” you credit the line “It’s the shape I’m in.” to track three from “The Sinking Belle (Blue Sheep),” from the Boris and Sunn O))) collaborative album Altar. What about this line inspired the rest of the poem? What band would you pick to write the soundtrack for the other poems in Currents? Why?

BL: Actually, that line was probably the last one I wrote for that poem. I was working on the poem and listening to that track feeling frustrated because I knew something was missing and boom there it was. Wata’s vocals and that line. For Currents, since it took so long to write, the playlist is extensive but I can certainly name a number of the bands. Coil, Earth, Aphex Twin, Mayhem, Neurosis, Chopin, Bach, Brujeria, Sepultura, Behemoth, Slayer, Converge, Satyricon… I really could go on and on. I listen to music all day, every genre, though I generally write to metal, noise, or doom. Music where I don’t readily discern the lyrics, where the vocals are more percussive, pure guttural emotion. Poetry, for me, is percussive. It can be noise, acoustics and sonic qualities. Sometimes I see lines as wave patterns, auditory hallucinations.

BL: I write on a rosewood desk that I’ve had since I first moved out of my parent’s house, though I often like to write at a dining room table because of its large size and lack of my clutter. There’s a stack of folders and papers on the left hand side, which are the projects I’m working. On top of that are the books I’m trying to read. I’m surrounded by books. Shelves and shelves of books. Stacks of books. Books of books. There’s a shelf in the shape of whale above the desk that holds my pens, post-its, and other shit. I write by hand, transpose to the computer. I always have a guitar or bass within reach.