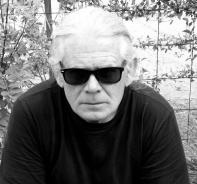 Jeff Falk began making art in 1973 with his first oil paintings. Before long, he discovered he was better able to deliver his vision using mixed media. In the early 1990s, Falk began working with collage, which he feels is an extension of painting. Falk, a native of Nebraska who was brought to Arizona as a child in 1959, has been an active participant on the Phoenix art scene since 1984. His work is in the collections of the Tucson Museum of Art; the City of Chandler, Arizona; Phoenix Sky Harbor Airport and Mesa Contemporary Arts.