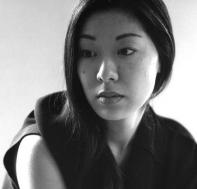 Katie Kitamura is a critic and novelist living in New York City. She is the author of The Longshot (2009) and Gone to the Forest (2012). The Longshot was a finalist for the New York Public Library's Young Lions Fiction Award, and is currently being developed into a feature film by Peter Berg. Kitamura has written for The New York Times, The Guardian and Wired, and is a regular contributor to Frieze and Art Monthly.

This interview was conducted through email by Interview Editor Justine Pallas. Of the process she says, “I was very excited to interview Katie. She has said in other interviews that she enjoys writing about things she isn't supposed to write about, and I love how that sense of adventure comes through in her writing. In this interview she discusses her background, research process and taking risks in writing.”

Katie Kitamura: The great thing you learn from training is that you have to continue, regardless of how exhausted or depleted you might feel. It's an endurance thing. Writing is much the same, you wake up and you sit down and you do it every day. Some days are better than others. Some days you're no good at all, but it's still necessary to go through the motions.

SR: Your first novel, The Longshot, is set in the world of mixed martial arts fighting. What was the research for this like?

KK: There was a certain amount of technical knowledge that I needed to acquire. But what ended up being most important for me was listening to the speech patterns of the fighters—once I could reliably hear their voices in my head, it was relatively easy to create the world of the novel.

SR: I read that you are currently working on a screenplay for the film adaptation of your first novel, The Longshot? What is unique about that process? How does it differ from composing the novel itself?

KK: Compared to writing prose, writing a screenplay is incredibly rapid. Scenes can be written and then altered in relatively short amounts of time. It takes a little adjustment to move from the slowness of crafting prose to the velocity of writing for the screen, but the main thing that I'm always aware of is the fact that with a screenplay, you're never doing more than providing a road map for someone else—the director, the actors—to follow or ignore, as they see fit.

SR: How was writing Gone to the Forest different than writing The Longshot?

KK: For me, Gone to the Forest is a more ambitious novel—the scope is wider, even just temporally speaking (The Longshot is set over three days, while Gone to the Forest tries to encompass multiple cultural and historical settings). But they are both novels that are concerned with the idea of masculinity, and in particular the notion of archetypes—how those archetypes are constructed and also how they fall down.

SR: The old adage says to “write what you know,” but you seem to have rebelled against that with both of your novels, yet they have been praised for their authenticity. What drew you to the subjects of each?

KK: I'm suspicious of the notion of “writing what you know”—it implies a certain conservatism, when on the whole I think good fiction is about taking risks. And then there is also the fact that writing a book generally takes place over an extended period of time, for me at least a couple years—in a lot of ways, writing what you don't know is a good mechanism for learning about the world during that time.

SR: The phrase “collage of colonialism” keeps popping up in interviews and reviews I've read of Gone to the Forest, and you've said the story is set in a country that is a combination of Kenya, Zimbabwe, India, and Argentina. Why did you choose this approach and why those four countries?

KK: I wanted to do something that would capture what I think is our increasingly fragmented approach to history. It's now a given that any historical narrative necessarily breaks into multiple points of view; we no longer believe in the notion of a single authoritative narrative. But there's also the fact that there is something about digital culture that aids and abets this process of fragmentation—look at phenomena like the mash-up. I was interested in trying to find a literary equivalent to that, and seeing if it was possible to harness some of that strangeness and that energy.

SR: I watched a video clip where you talked about Gone to the Forest and said that stories can get lost in the depth of personality, and that you intentionally created a story where readers wouldn't be able to fully identify with the characters. What are some of the tools you used to make this happen? Is there a character you felt you identified most with when writing?

KK: I'm wary of the over-reliance on identification as a way of drawing a reader into a narrative. I would argue that there are, that there have to be, other ways of doing this—whether through style or form or plot. If a novel always allows for easy identification, then to a certain extent that means the novel isn't capturing something that is genuinely alien to our experience, that by definition shouldn't be easily accessible and consumable.

SR: What are some of the advantages and disadvantages of structuring a narrative with minimal details?

KK: In the case of Gone to the Forest, the setting contains deliberate inconsistencies, so the details, while minimal, are important in highlighting certain ruptures in the world of the novel. The challenge is making a world that still has enough texture to allow the characters and the narrative to bed down into it, a backdrop that perhaps calls attention to its incongruities, but not to the degree that it negates the narrative completely.

KK: I would only say that it's not difficult for a woman to write about men—the whole of our experience is colonized by male narratives, male perspectives. Historically speaking, the literary canon is dominated by stories written by men about men.

I'm writing a pre-apocalyptic (rather than post apocalyptic) novel about toxicity—but it's in its early stages.