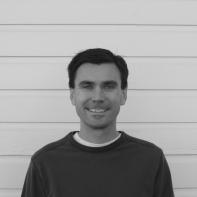 Most of the poems these days seem more like complaints
to be lodged with the city-someone painting
a nighttime yard with dead-headed condoms
or gunky beer cans, someone breathing lacy
inanities into an over-sexed phone,
maybe a hermit or holy ghost or the
zealot hustling votes for the democratic
zillionaire. The new ordinance precludes me
from naked-chested baying past one in the
morning at houseplants. The former ordinance

forbade, from three to five, reminiscences
of the left-wing campaigner who courted me
once but now scatters offensive debris
over my lawn. The heat-lamped marijuana I
grow in my closet cannot dull the ample

handsomeness of the setting sun, which lately
pollution has vivified to the level
of world-class athletics. The psychedelic
mushrooms I pilfered from my mother-in-law's
purse cannot return me to a prehensile

or prelapsarian or even a pre-
democratic state. Like most people, I wish
I were an eight-foot automaton thrashing
around the cul-de-sac, threatening the bored-
to-tears sun-drunk housewives with karate.

Spoils to the House

The casino was the only amiable scene, the only place that kept the air running as the dashboards cracked in the cars outside. If the greetings were disingenuous, at least they were free. The cars ran on tumbleweed, and no one could afford the lunch buffets anyway. The dealer resembled a former congressman from a rust belt state ousted on charges of competence. We lingered in the bathroom, drying the sweat from our armpits with paper towels. The paper towels were free. At home our hard drives crackled under the weight of all we asked of them, for we asked how to behave in the face of bullheaded ambiguity. Our pensions swooped overhead like pterodactyls making razor-blade shadows. Meanwhile the investment bankers managed a way to inflate the cocoa bubble so that kids mortgaged their savings for chocolate bars. Our hard drives told us to hit, then to stay, constantly refiguring the odds as though some scenario might find them in our favor. But everyone knows the spoils go to the house, always white as the driven snow.