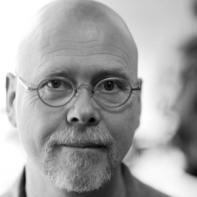 Christopher Burawa is a poet and translator. His most recent publication is a translation of Icelandic Modernist poet Steinn Steinarr’s most famous work, Time and Water, which he co-translated with Cynthia Hogue. He lives with his wife and daughter in Red Wing, Minnesota.

An Act of Ghosting to Avoid Complications

The season contradicts the ration of mind.
Midnight's prologue mirroring the empty

tub and all its sad associations. An old-fashioned
mythology of, say, eyes. Eyes like ears. Or eyes

like a mouth, a boundary that casts off its reverse
without your effort. From the first, there is the rolling in

and rolling out. The frozen water and the waterfowl respond
with sameness. Throughout the body there are no reflected images.

From a distance a gray man waving at no one
seems green as he stands scalloped against, and
sometimes in, the white steam escaping a sulfur
fumarole. Behind them both the fallen curtain
of an alluvial plain. And a dandelion

seed, anchored now to a rusty cat comb,
repeats in the breeze frantic motions
of a trapped mayfly. At this point set aside
an understanding of how a strawberry vine will go
as well down a wall as across the lawn and ask yourself:

Is the gray man, now on his knees, praying?
And is the seed designed to promote its own freedom?
Be careful in answering.
The examples are neither different nor the same.

Vultures and the Constant Application of Them

Their approach lacks sudden-
ness because they waste no light, because
even in dying there is a smell,
which they calculate against the terrain,
the brown fescue, a sycamore. The
approach is a kind of dialect that propels
and retreats, two forces upon
which they wake or sleep. And it is toward
their sleep you most notice them.
The setting sun points from the north,
forming the hard shadows that
affirm nothingness, and this cold
city must consent to them.