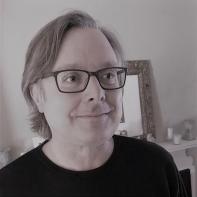 Charles Rafferty’s most recent collections of poems are The Smoke of Horses (BOA Editions, 2017), Something an Atheist Might Bring Up at a Cocktail Party (Mayapple Press, 2018), and The Problem With Abundance (Grayson Books, 2019). His poems have appeared in The New Yorker, O, Oprah Magazine, Prairie Schooner, and Ploughshares. New prose poems are forthcoming in Plume, Gargoyle, Rhino, and The Southern Review. He has won grants from the National Endowment for the Arts and the Connecticut Commission on Culture and Tourism. Currently, he directs the MFA program at Albertus Magnus College and teaches at the Westport Writers’ Workshop.

On the way back from the hardware store, I see the coyote on the side of Route 84. It is big and wolfish and dead. Two crows stand beside him, looking for a place to begin.

Later that day, while I'm dropping off my daughter at a birthday party, the mothers are all talking about the dead coyote: "big as my father's shepherd," "like it was sleeping," "gray like our van," "a buzzard with a head up its ass."

It's a small town. Everyone worries about the coyotes they never see. Someone has told us they'll eat our pets, our three-year-olds. It doesn't matter that we know about odds, that no one has ever been killed by a coyote in this state. The coyote is our boogey-man. Now that we've seen him dead, our apprehension, oddly, increases: "they travel in packs," "the den must be close," "they get hungrier in winter, more desperate."

The party is one where the mothers are going to stay. And even though I'm just a father, I decide to stay too. I settle in to the iced tea and gossip. I help police the dozen roving daughters as the woman from Critter Fun comes in with her hedgehogs and snakes to delight us all. None of the animals, no matter how strange, make us recoil. Even the giant cockroaches are passed around and petted.

I tell the mothers I saw the coyote too, earlier, maybe just after it happened. They nod and sip their drinks, waiting for their chance to touch the airy warmth of the chinchilla—so light in your lap you could forget it was even there.

By the end of the party, my daughter is cranky with cake and her first real soda. She has to be forcibly strapped into the car. I take the long way home on 84 to make her fall asleep, figuring I can show her the coyote if she's still awake. But the coyote is gone when I get there. Not a trace. Could it have been eaten that efficiently? Is there a taxidermist living among us? What if it was somebody's shepherd? Maybe it was just sleeping?

My daughter is unconscious in the rearview mirror, and the woods along the highway are getting dark. I get off at the next exit and follow the road to our house—taking the route that everyone knows. We pass the animal hospital, the streetlight with a bluish tint, the low stone wall that keeps out nothing, and the oak on the outer curve with seventeen reflectors nailed into its bark to tell the world beware.