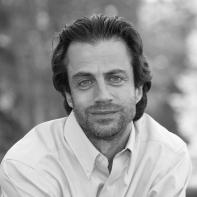 Arthur Phillips has been a child actor, a jazz musician, a speechwriter, a dismally failed entrepreneur, and five-time Jeopardy! champion. He is the author of five novels. Prague, was named a New York Times Notable Book, and received The Los Angeles Times Art Seidenbaum Award for best first novel. His most recent book, The Tragedy of Arthur, was also named a New York Times Notable Book, and the play taken from that book is being developed for a full stage production. His work has been published in twenty-seven languages, and is the source of three films currently in development.

This interview was conducted through email by Interview Editor Justine Pallas. Of the process she says, “Arthur Phillips is the author of five distinctly unique novels that cover a range of subjects. The Egyptologist remains one of my favorite books and it was an honor to speak with him about it. Here, he talks about his writing process, Shakespeare and confused fans."

Arthur Phillips: I do like to describe places. I like, as in Prague, describing places I have seen and love; there's a deep pleasure in describing something you truly love. But then I also discovered the pleasure in describing places I have never seen and some places that don't exist. I've never been to Sydney and didn't particularly do much research beyond a few photos on the web, but a picture of something began to grow in my mind as I wrote, and I enjoyed that too.

SR: The Egyptologist uses an epistolary structure. Will you describe how that evolved?

AP: About six months into writing the book, mostly sketching scenes, ideas, character sketches, journal entries, straight narration, etc., I had a strong enough sense of the plot that I had to start making decisions about point-of-view and voice. I actually stopped writing and spent some days, maybe weeks, on sorting through my options. I wanted a clear sense of what I would gain and what I would lose with any given decision. There were some things I wanted to hide, and certain structures and voices wouldn't be able to justify those secrets. I really charted out all my options, ran the pro's and con's, and finally settled on what it ended up being: epistolary and journals combined (since the journals were mailed with the letters).

SR: You have said that you sought assistance from a British Museum curator for much of the research that was required for The Egyptologist. Will you discuss your thoughts on the traditional view of the writer as solitary subject? What other influences come into play for you as you create?

AP: There is a romantic notion, to be sure, that a novel is the work of just one mind. And that is largely true, and largely desirable. But it is at least slightly inaccurate. Editors—good editors—improve a novel not by their own terms, but on the writer's terms. They help a writer produce something more like what the solitary writer would have wanted in the first place. Friends, family, peers: there is good advice to be had if you know what you're asking for and know how to listen.

SR: Your newest novel, The Tragedy of Arthur, blurs a line between fiction and reality. The main character is named Arthur Phillips and though it's a work of fiction, it was a marketed in a way to make it seem like it was not. Will you describe the decisions that you made leading up to this? Do you have any stories about readers not being convinced it was fictional?

AP: There was a woman who, searching the Internet for information on me, found she couldn't confirm much, and concluded that my history had been "erased" on the web...

SR: As a writer, can you describe your relationship with the works of Shakespeare? Do you have a favorite play? What was it like writing a play in his style?

AP: In all honesty, I liked Shakespeare before working on this book, but did not have a close connection with his work or a real love for him. Those grew as I wrote the book, and I now rank him among my favorite writers. To me that's a healthy place for him; he's not a god, he's not the one and only writer, he's not the best by a mile. Instead, he's one of the list that I love, and whose work is uneven, from the greats (Hamlet) to my personal, lesser-known favorite (King John) to some stinkers.

SR: What are you working on now? Do you work on one project at a time or is it not unusual to have multiple projects in development at the same time?

AP: I am working on a collection of short stories, on a couple of TV pilots, and on the staging of my play in April. I usually just work on the next novel, but I'm trying to break into a few new areas right now, so I'm throwing more spaghetti at the wall, as they say. (They do, don't they?)

SR: Which writers have inspired you the most?

AP: There are dozens, going back thirty years now. I feel mean just naming one or even a few.