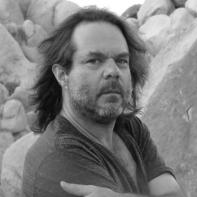 David Dodd Lee has published seven previous full-length books of poems, including Orphan, Indiana (Akron, 2010), The Nervous Filaments (Four Way Books, 2010), Abrupt Rural (New Issues, 2004) and Arrow Pointing North (Four Way, 2002). Sky Booths in the Breath Somewhere, The Ashbery Erasure Poems (BlazeVox, 2010) appeared as well in 2010. His new book, a selected poems of unpublished work, The Coldest Winter On Earth, Poems 1998-2011, was published by Marick Press in May, 2012. Lee lives in a small house on a river in northern Indiana.

Under clouds, the forklift ploughs a century of sodden books
into a pile that topples endlessly toward the horizon.

They sank the anchor through his face, into the imagination.

Bluegills frozen in the ice illuminated the hockey rink.

My Aunt Susan suddenly hears a gate closing in the future.

The accountant is drinking wine, this weather is dead flowers, egrets land
after midnight on these Chinese bridges.

The joy cannot continue,
cannot extinguish the fire in

the bathtub,
the sirens roving from room to room

in the small house just down the hill
from the seven large houses, candles in

every open
doorway. This is how you see in the dark, he says,

and he takes her hand in his hand, her hand
holding a yellow pencil, and he crosses words out.

Two rooms, six rooms, forty-five
rooms, and a man fishes for his

lighter in
his pocket. The cucumbers look so green

on the white plate. The wash sits in the sun,
clothes just out of the dryer, trees getting into the

people. That's
the idea, fluffed with air, how can anything feel

better. It can't, she says. Someone who doesn't like
the new neighbors starts writing things down. He's not going to get

over this.
One by one her buttons pop like firecrackers.