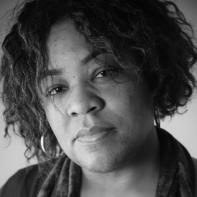 Kamilah Aisha Moon's poetry collection, She Has A Name, is forthcoming from Four Way Books. A recipient of fellowships to the Prague Summer Writing Institute, the Fine Arts Work Center in Provincetown, MA, the Vermont Studio Center and Cave Canem, her work has been featured in several journals and anthologies, including Harvard Review, jubilat, Sou'wester, Oxford American, Lumina and Villanelles. She has taught English and Creative Writing at Medgar Evers College, Drew University and Adelphi University. She has also led workshops for various arts-in-education organizations in diverse settings. Moon received her MFA in Creative Writing from Sarah Lawrence College. Photo by Rachel Eliza Griffiths.

Who proclaimed the healing mojo
of wood altars, blood-red carpets & stained glass?
A single cross hanging; polished brass bowls.
It must be real, found all over the world
configured like this. & me, bowing before it,
finally understanding
what the word beseech really means.

I've come to be held up, to keep the fallings
at bay. But listen, this NY parish doesn't sing gospel
the right way. They don't sang it—
leaving out shouts, moans, vocal runs
& downhome syntax—“I just can't give up now”

will never be “I don't feel no ways tired.”
It's not the same, it ain't. I can hear the notes
missing how the old words fit. This is not
the song I need to sing tonight. How foolish,
attempting to properly conjugate struggle.

Lines form to pray & wash hands.
About to sprinkle my face, the last thought
I should be thinking stops me. Who knows
where all of these hands have been!
& could my clean be someone else's filth?
How silly to be on this earth nearly 40 years
& still worry about contamination. Everything
has been touched, even what was

buried in ice, thawing again. The subway's full
of sin, the sullied riding side by side. Seems like
my feet used to peel & remain soft on their own.
But when I look down now, heels hardened by all
they've had to carry, or stare at what happened
to my face after an unholy baptism,
no amount of scrubbing matters.

I've come to be saved, to remember why
I'm still worthy. But I'm becoming convinced
a good memory is a passport to hell, all things
that soothe before singeing.
Perhaps like those in Manila in 2012, & the Gulf Coast
in 2005 & 2012, I want water to be
a good thing again, like love. How strange

to answer the beg
of so many thirsts, unable to swallow.

Forensics of a Half-Empty Apartment

Two dozen eggs rotting in the fridge;
few things are over easy, and often
can't be unscrambled. No day
or kiss undone. It is this now.
Darkened mush like kale that once
would have nourished,
given her what she needs.

Missing a young, pink safety,
teeth yield to lessening shores.
Lemongrass oil keeps her
from being breakfast for bugs sometimes.
She once loved how pesto salmon
and pasta with pine nuts made her mouth
swoon, left her sated but not weary.
Creamy hummus around the crisp snap
of carrots, and the naive belief as a child
that crunching them made her eyes pretty.
Later, she learned carrots aid sight
but she's seen enough now.

Outside, even the sun has its hands
around her neck and inside,
she's grown armor that only beer and grease
penetrates, thickened by “food” if abandoned
on a shelf, would outlive her
by decades. Tongue wedded to salt
and corn syrup, a stickiness
has settled over everything
through a small barred window
winnowing light.

A fly drones through
stale, humid air; a woman
gives herself no choice
but to breathe it in. A wall full of holes
that someone else made.
Cobwebbed corners too high to clear.
A fan's gray fuzz
from endless churning

After Surgery: Riding in My Body with Others in Theirs

All afternoon I pleased myself.
To hell with work, I needed to know
that I still work, pleasure
still possible. My body able to say
yes after trauma, sigh into itself
without deep revolt, passion
without reprisal. Took matters
into my own smooth, hungry hands.
Praise God I have some control;
the saving grace of a room
in a rented apartment,
the shield of a plywood door
closed to calloused eyes.

The old woman did not have that same grace
tonight, subway car bench
turned bed. Our commuter eyes became
bays that her robust wave of urine
rushed toward, cascading across the long seat—
a putrid falls that doused bags and feet
not fast enough to move in time.

We scrambled as if it was acid that would scald
forever; awed and aghast, anxious laughter
and the rueful shaking of heads as if we knew
something about being human
that she didn't.

What could she do but slump
into damp, uneasy slumber?
Everyone rattling along, jerking

with each start and stop—
the involuntary, inevitable tributaries
splitting off to chase
each of us down.

The almost, unsound sleep.
Fluorescent, beeping nights and drab,
venetian-slatted days
of nurse shifts—
crapshoot of care. No thanks,
I'll insert the suppository
my damn self. And take
back the pneumonia,
please, such promiscuous
hands.

And the green interns,
playing doctor on the
live broken doll
with my drawn eyes.
Rounds of them gawk
and handle,
unsheathed fingers
not asking consent.

As if I am amphibian
and straight-pinned
to this awful bed.

As if I am not warm,
threatened by fever.

As if my soft, barely
insured octaves
don't count.

That's it—the slither
of my eyebrow
freezes them, hisses
Enough.

‹ "Nautilus" by Joannie Stangeland up "Along the River, Winter" by Keverlee Burchett ›