"The Revelator" by John Proctor 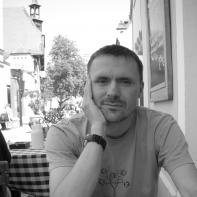 John Proctor lives in Brooklyn, New York with his wife, two daughters, and Chihuahua. He's written memoir, fiction, poetry, criticism, and just about everything in the space between them. His work has been published in Underwater New York, Defunct, New Madrid, Numero Cinq, McSweeney's, Trouser Press, New York Cool, the Gotham Gazette, and the recent anthology Imagination & Place: Weather. He also serves as Sideways Reviews Editor for Hunger Mountain Journal of the Arts, and teaches academic writing, media studies, and communication theory at Manhattanville College.

For about four weeks now, our 2000 Honda Civic has been making a funny noise when we start it in the morning. My wife was the first to notice-kind of a whirring, whistling sound when I give the car gas, which runs its course after I pump the pedal two or three times. We'll ask when we take it in for a checkup next week, but I already recognize the sound. At first it seemed just vaguely familiar, but this morning the memory came back to me while I was pumping the gas, in one mad, mixed-up torrent. I heard this sound every morning during the summer of 1996 while hiding in the bushes at 6:00 a.m., night after long sleepless night, from another Honda. It's the sound of death.

I was in love with a girl then. I'd given up my track scholarship at college in Kentucky and moved back to my hometown of Lawrence, Kansas before my senior year, planning to marry this girl after meeting her the previous Christmas vacation and commencing a long, tireless series of letters and long-distance phone calls. She broke up with me less than two weeks after I arrived. She said she felt restricted, that she had so much of life to live before she could let someone else into it. I saw this as a test, that she wanted me to show her the depth and scope of my love by calling constantly, extolling to her mother all of her daughter's grace and beauty, visiting her at work during lunch, and making a general nuisance of myself in every possible circle of her life. This overt display of my loyalty and affection ended when she threatened to call the police after I begged for the umpteenth time for her to please, please just let me come over, I just wanted to talk.

There I was, in the middle of a town that had never felt so empty, working at the local Checkers in the meat department, not enrolled for my senior year. My old English teacher, Mr. Wells, saw me at work one day and commented, “I see how well you've done as an English major.” I woke up at night, shaking and unable to sleep, or to see the bottom of the deep, dark chasm in my life. When I think back to that time now, strangely enough, I remember being utterly, sickeningly alive-I felt everything, was open to the bludgeoning indifference of a woman and the ignorant hope of a life not yet transcripted.

I started running again that summer, if only so those times when I woke up at 3 a.m. and felt that dull ache in my gut I had an excuse to run across town from my friend's apartment where I was staying to her apartment, and wait behind the bushes next to the parking lot for her to exit the building and start her Honda CRV to that familiar whirring, whistling sound each morning as she pumped the gas two or three times and left for work.

Most people, after reading James Joyce's “The Dead” the first time, remember only the last three pages, when Gabriel Conroy's wife reveals the long-suffering void in her heart left by a boy who died singing unrequited love songs outside her window in the rain. And when I say most people, I mean me. When I read it my sophomore year of college for a Twentieth Century British Literature class, I empathized most with the ghost of Michael Furey, whose songs remain in the heart of his beloved long after his candle has been extinguished in fate's cold, wet indifference. But Michael Furey isn't a character, he's only a memory. The first fifty pages are where the story lies: in the heart of Gabriel Conroy, a man who, for having spent most of the story and his life in the company of women, finds their hearts, not the least of which his own wife's, unfathomable. So deep is his longing for his wife, and so misguided is his belief that he in fact knows her at all, that the revelation of Michael Furey's ghost leads him from ironic fury ultimately to the quiet understanding of the secondary place he holds in his wife's heart.

But even Gabriel Conroy is not the central character in “The Dead.” The central character, the driver of the narrative, is-to borrow from Gillian Welch-Time, the Revelator. Unlike Gabriel, who “had never felt like that himself towards any woman,” I have been Michael Furey, only with a better immune system. If ever I was to die of a broken heart, it was that summer of 1996. But I reenrolled, finished school, broke some hearts of my own, and in the process steeled myself against ever being that vulnerable again. My wife now complains that she feels I'm not open enough with her, that she frequently senses I'm holding things back. I probably am; like so many other organs, we inoculate our hearts, give up risk for security. Only with the passage of time do we realize, too late, what we lost.

My wife is now five weeks pregnant with our second child. The first physical symptom she's currently experiencing is insomnia. I wake up a couple of times each night and look over to her, and she's reading. I find myself disappointed each time, missing those moments in the middle of the night when I wake up, look over, and find her asleep. When she's deep in slumber, I wonder what she's dreaming about. Am I part of these dreams? Or is she dreaming of other lives she might have led, former lives she's had? At these times I feel the same dull, divine ache that woke me every night in that summer of 1996, the same ache Gabriel Conroy felt as the snow fell down, “like the descent of their last end, upon all the living and the dead.”

I've had our Honda since before I met my wife. It's had a long life, and seen a lot with me-my flight from a previous relationship, the 60,000 miles of road I traveled before finding her, and many shared trips with my wife and later our daughter. Time has revealed itself through this car-even a time before it existed. The sound, I know, is a death rattle of sorts. At 160,000 miles, she's not getting any younger. Perhaps twelve or so years from now my daughter, driver's permit in hand, will start up our next car and hear the same whirring sound, and she'll remember-vaguely, indistinctly-a time before her conscious memory kicked in, when her mommy and daddy drove her everywhere. Perhaps she'll feel some indefinite sense of loss, of the passage of time. This will (hopefully) be before her heart has been first destroyed, before she is even able to comprehend death as something she'll someday experience. But she'll feel it, and pause just a moment, before turning the ignition and driving in her own direction.