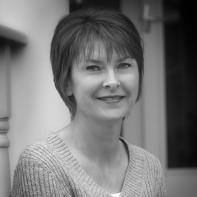 Virginia Smith is a graduate of Northwestern's MFA in Creative Writing Program. Her poems appear most recently, or are forthcoming, in 2River View, Denver Quarterly, The Jet Fuel Review, Rattle, Stirring, and Weave.

A mountain is given an impossible
task: to rock on all fours like a woman
giving birth. Upheaval of an entire

being. It is not a place
possible to avoid: you are already here.
A car with men in dark glasses

running beside it drives under a bridge
and never comes out, though the men do,
framing the space where the car had been.

Adjust your hands to another,
newly cropped view: there will be no child.
The absence of child is also an image.

A woman stands straight, naked, and breaks
the skyline, a city unmoored at her feet —
stone houses drowned, wrists a thin spire.

She is beautiful, as all women are beautiful
in the way they are not you, and the way
they are. As a labor:

an abandon: a city's torn shore and unsettled
sleep skirting the edge of someone else,
a cup holding all our suns.

A gray-lipped man circles a pond, hands bare
and raw. Our concern is rehearsed, blue-

rounded and rushed, but still meant,
intending to mean, just as his words are

earnest, leaning toward, and already lost
in speaking — leaving us

bodies alone to put on, take off, voice
spun into spray across water. Beneath junipers,

two stick figures drawn as with a brush
handle through paint: one kneels,

arms angled toward the other
staring back down rifle-sights, lines lost

in the nod and sway of limbed shade.
The city creeps near, with its windows turned off.

Shadows lie in the alley —
who do they belong to? Perhaps just laundry

hanging from balconies, but the shadows
don't know they're from shirts, and they flutter

sad wrists with no hands,
headless necks, the air violet with early spring.

*The following lines in “[city ringed with erased roads]” are based on images, but not necessarily the exact language, found in various translated works of the noted poets:

the city creeps near, with its windows turned off — Tomas Transtromer
shadows lie in the alley — who do they belong to? — Alejandro Jodorowsky
perhaps just laundry hanging from balconies, but the shadows don't know they're from shirts — Fernando Pessoa.