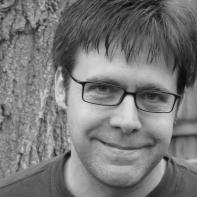 Somehow we got on childhood—X-ray
glasses, Billie Jean, Evel Knievel
and his two hundred broken bones.
When Kate took my hand
it felt like the wind was going through
one by one to break my own.

“Mr. T,” I offered.
“The Colonel, the crazy guy.”
Madson's sick elms lined our way like dark
bodyguards. “And the ladies man,” Kate said,
which led us to those stupid kisses
on school playgrounds that began in horror—

like watching a roulette ball jump crazily
around your number. We stalled out there
until we were standing at Kate's door.
She said, “Truth or Dare?”
I said when she flirted with Lorenzo I wished
he'd drink himself to death already.

I was sure watching her lips circle
around Truth was life's greatest pleasure
until she brought her mouth to mine
so long I thought night would fall before
we fell apart. When I asked Kate to tell her secret,
she refused. She always chose dare.

We Addicts of the Past

Kate's a lawyer, did I tell you that?
She could talk you out of anything
or into one fine mess. She spoke
in memos, briefs, bits of bread
black birds of want swooped over

and devoured. We lunched once
in her office, on bread and cheese
and olives-oil shining on her lips-
and talked about afternoons we used
to think our lives would see again.

In high school she'd been a wallflower.
The gangly girls always blossom
into beauties. Now the punks
and wide receivers she'd pined over
back then were hunched over their guts

beside defense attorneys. I said I still
felt like a wallflower. Kate wrapped
her lacquered fingers around my wrists
and kissed me on the ear,
then went off to put a man in jail.

Kate's House in the Afternoon

I parked around the corner
and snuck in through the back.

I'd never done anything like that.
Lorenzo was the one with stories

about dropping from second-floor windows
or covert meetings at the Silver Moon.

One he told often featured him crawling
naked out a Doberman's dog door,

ending up tooth to tooth
with the dog himself. Kate

pulled me inside. Her lawyer clothes
halfway off, her gray jacket draped

over the blue couch, high heels
lined up below like petty criminals.

I tried to ask about her trial.
She hushed me, sick of talking,

and held my shaking hand to her lips,
which stilled it like a shot. No one

was a sexier flirt than Kate,
but in the bedroom she got serious.

I still have the scars to prove it.
This was something to hover

above and watch, like being
strapped to the operating table

just before they bring you back.
Paddles on my chest

and I was driving between giant maples
rising from their dying lawns.

Lorenzo was a liar
so I tailed his busted Civic
as he swerved through town like a kid
pushing a toy car across a sandbox. He turned
then turned again into the maple-sifted sun
until our destination was clear as television.

Lorenzo veered into an alley,
a knife between two ribs.

My radio was off but it didn't matter.
An old song blared in my head
as he pulled over in some weeds
and reeled from the car, steadying
himself for a moment on the back gate
of the house of Katherine the Great.

Midnight was a deep
ravine with a snow melt river
tearing in its crease,
the nights I understood
Lorenzo best, who didn't
seem to have a cell
to sleep in. One moon
in particular would not let
me sluice his image
from my head, so I peered
into my black television
as rain poured from the gutters,
gossiped a while,
then went on to mingle
with other wine-eyed
wakers up the road.
Out there in some Madson
hole slumped Lorenzo,
wet and pruning,
hungering for Kate, who
lay beside her husband,
sleeping like a saint.