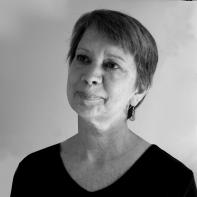 Mercedes Lawry has published poetry in such journals as Poetry, Rhino, Nimrod, Poetry East, Seattle Review, and others. She's also published fiction and humor as well as stories and poems for children. Among the honors she's received are awards from the Seattle Arts Commission, Hugo House, and Artist Trust. She's been a Jack Straw Writer, held a residency at Hedgebrook and is a Pushcart Prize nominee. Her chapbook, There are Crows in My Blood was published by Pudding House Press in 2007 and another chapbook, Happy Darkness was released by Finishing Line Press in 2011. She lives in Seattle.

From the Corner of an Eye

The Duke of Urbino suffered the loss of an eye
in a tournament. This mishap had several
consequences, but perhaps most crucial to his good health
was the lessening of peripheral vision.

Try it. Close one eye and look to the opposite side
and what do you see? Your nose.
With both eyes open, the nose disappears.
I learn this in an essay by Lawrence Wechsler.

Back to the Duke, a condottieri who was living
in a time of nasty intrigue, conspirators lurking
in hallways and spies spilling out of secret doors.
This Duke is said to have inspired Machiavelli,
so we understand he was no slouch at ruse and deception.
He feared, however, with his impaired sight,
he might miss the flash of sword, a shadow
easing out from the tapestry and to address this danger,
had the bridge of his nose shaved off.

Wechsler was concerned with perspective in art
but I am taken with this mercenary who detected how
a diminished snout would enhance his chances.
With an angular profile, he lived a long, if bloody, life.

I am ruin in a copper glaze,
listless May and blowsy roses.
I am the humming wire,
the tongue of a lion, the harsh wind
off the tundra, blue scrabbled
to green, the sea's sad echo.
I am the sighs of the dead still loved,
forgiveness wrapped around a wrist,
tenderly. I am the fraught siren
with no knowledge of pain, the actual
circumscribed by threat, the yew tree,
the rusted harrow. I am
an arbitrary life, a swimmer in fog,
a steady stream of words, roots
frayed and hungry, stones
in a diminishing stream.

There were no ladies and only a handful
of gentlemen. The meeting was called to order.
Lies crept in under collars, clinging
to the dust on shoes. Some heard sirens,
others only an echo as if threats were swirling
outside the room, disguised or otherwise.
No accounting for taste on a Tuesday evening.
Hope became rain and then a sliver moon.
What would have been helpful was a linguist
but alas, she'd moved a few years ago,
unable to carry the burden.
Where were the elders, had they all chosen
this particular night to die?
Ah, civic duty isn't what it used to be.
Later there would be furtive cigarettes and imported beer,
but only from Canada. The unspoken rules
stayed that way. The vast majority pretended
that it didn't matter whether someone waited at home.
The others opened their arms.

The Writing on the Wall

Large writing, interspersed with figures,
all scrawl on the red building, grime swathes
and chipped bricks, this message
as mysterious as the disturbance in a head,
the neural curves thwarted and the end result
called mad. This so-called madness,
quicksilver in the brain, with something to say,
now finding a place, this good space in need
of a serpent, words slithering and spackled
with beings, these no-names, these concentrated
lines in a hurry, idea-bones indecipherable
but clearly awake to one definition of soul,
whether winged or rooted, still human.