"An Ensemble Cast" by Bud Jennings 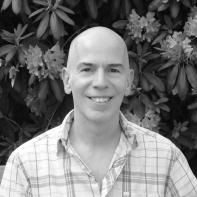 Bud Jennings completed NYU's graduate creative writing program and writes mostly fiction. He finished the final draft of a first novel last summer and has a short story in the fall issue of Educe. Previous work has been published in Christopher Street, Between C&D, and Stuff (Boston). An excerpt of his novel appeared in Coloring Book: An Eclectic Anthology of Fiction & Poetry by Multicultural Writers (Rattlecat Press). Bud has received support from the Massachusetts Cultural Council, Blue Mountain Center, the New York State Writers Institute, and Hallwalls Contemporary Arts Center. He lives in Salem, Massachusetts with his husband, Rick.

As a kid of eleven or so, I'd watch afternoon reruns of “The Munsters” and try to grasp how Marilyn Munster, a normal girl-next-door, could not see the weirdness in her relatives. I'd already learned that when my own family members came together, their shared and symbiotic neuroses reached a critical mass that would leave any unseasoned witness wide-eyed and dumb.

To remain out of earshot of my family's theatrics, I'd exiled myself to distant cities, all through my twenties and early thirties. But when my father died suddenly, I returned to Massachusetts to help keep my elderly mother afloat. And after almost a decade as the dutiful prodigal, all the while finding amusement in trysts with a short shelf life, I'd finally met someone who warranted mention.

So my irritable bowels rumbled when my mother said, “You have to invite your friend Rick to my eightieth birthday lunch. We have to meet him.”

The gathering took place in a little Italian restaurant wedged between a hair salon and a greeting card shop in a strip mall. It was midafternoon, past the lunch hour, and I was thankful we were the only table in the dining room. There was the birthday girl, Mae, who complained loudly that the restaurant was so dark she needed headlights on her walker. At her side was Jude, the youngest of my sisters, whose attentiveness to our mother conjured up a Leakey bent over ancient remains. Kathleen, the oldest and most tightly-wound of the children (and whom my high school friend Ann decreed “an exposed nerve in a dress.”), was resplendent in a salmon satin pant suit and matching eye shadow. Next to Kathleen sat her eclipsed husband Roger, whom she'd renamed “Brendan,” to make him sound Irish, like our sainted dead father. Mary Jane, twenty minutes younger than Kathleen, had bravely ventured out of the house for the celebration. Bipolar, often visited by panic attacks, and intermittently agoraphobic, Mary Jane had been a working actress in her twenties but left New York when her mind started to turn on her. Because of her acute deafness, the volume of the daily novenas and masses she watches on Boston Archdiocese Catholic TV would strain the Sistine Chapel sound system. Attending to Mary Jane were her two ex-girlfriends-turned-roommates, Barbara and Diane, retired psychiatric professionals whose expertise was both ironic and fortuitous—not to mention convenient, particularly as they're well versed in the jargon of visiting E.M.T.s. They sat smiling as Mary Jane hoisted her foot up onto the table, to show Rick and me her new walking shoes from the New Balance factory outlet. “Twenty bucks,” she announced. “Clearance.” I picked at my cuticles.

The lunch started uneventfully, but I still inspected Rick's face for twitches. Jude stirred Mae's mudslide. Barbara and Diane were, respectively, demure and caustic. Roger-called-Brendan receded into the basket of breadsticks. With a new audience member, the twins were trying to out-funny each other, and everyone's attention was on an old story about the Easter chicks that Kathleen's hyperactive children had chased off their back deck. Mary Jane turned to Rick and said, “You should have seen her kids when they were little. That was no accident. Those birds committed suicide.”

Rick laughed heartily, which put me at ease.

After salads, Mary Jane announced she'd go outside for a cigarette, and the solicitous Diane and the even more solicitous Barbara stood to accompany her. When they returned, Mary Jane seemed antsy. After a few minutes, she raised her hand, stopping Kathleen mid-story, and said, “I'm gettin' the shakies. I'm gonna need something soon.” This herald of her hypoglycemia was a battle cry that led my kinfolk into a Rumsfeldesque offensive. Kathleen: “Whaddaya need, Twinny, whaddaya need?” Then, rapid-fire, from Jude, Kathleen and Mae: “What can I get you?” “Do you want bread?” “Get'er some bread!” “What did she say?” Kathleen: “Bren, slide her the basket. Now.”

I strained to hear the music coming from the bar. Tony Bennett was crooning something, but he was overpowered by our table's din, amplified by the faux terra cotta floor.

Kathleen suddenly stood, her head spinning like a lazy Susan. “Where's the waitress? Is she in the kitchen?” Perhaps inspired by the heroines of every disaster tearjerker she'd ever seen, Kathleen grabbed Mary Jane's arm and stage-whispered, “Tell me, my Twinny, what do you need?” Marilyn Munster's dates always ran screaming from the decomposing mansion, and I pictured Rick driving home, mumbling to himself, his hands choking the steering wheel.

Mary Jane's light-headedness was real, but her reaction was as much a testament to her training at the American Academy of Dramatic Arts as it was to biochemistry. I'd once witnessed her dizzily collapse into a waiting armchair, and I was sure I'd seen the same choreography in a movie with Bette Davis, her idol. Mary Jane stared at the table. “I. Need. Cake.”

“What should we do?” Rick whispered to no one in particular.

“Nothing,” I answered. “It's always best to stay out of their way.” His disorientation was standard for first-timers.

“I'll get our waitress,” Kathleen announced—before running into the kitchen so fast she left a pastel smudge on my retinas.

Within a moment, out came the waitress, a slice of cake in hand, her expression like that of a cat being chased by a terrier. Right behind her was Kathleen, yipping appreciation. “We can't thank you enough, my twin sister is hypoglycemic, you are the sweetest thing, she gets so dizzy and weak…”

My mother waved her napkin in the air for attention. “Oh, not that cake,” she intoned. “We brought a much better cake from Tripoli's.”

Rick stared, the way spectators do at medical emergencies and sideshows.

“This is wonderful,” Mary Jane said, when she'd started to regain her strength after the third bite.

“Oh, thank God,” said my mother, sounding as relieved as when the exterminator says he can come right over to spray an ant.

Everyone was silently watching Mary Jane eat her cake. Dinners, even in restaurants, rarely included moments of quiet. I remembered Jude's First Communion breakfast at Howard Johnson's, how the sheepish manager approached our table and whispered into my father's ear, “I'm sorry, sir, but several tables are complaining about the noise.”

Rick studied our troop like a naturalist who's stumbled upon some uncatalogued species, and then he looked at me, his eyes wide, and I feared he was seeing me in them. Invoking my own movie idols (maybe Joan Allen as Elizabeth Proctor at the end of The Crucible), I said calmly, “She has her cake now. It'll be all right.”

Mary Jane finished the cake, and there was a calm for two or three minutes, during which my mother discussed our good fortune while so many were starving and homeless and didn't have gloves. She commanded all of us to keep extra gloves in our cars, so we'd be ready the next time we drove past a homeless person with bare hands.

Just as we were all chewing bread, Mary Jane slumped a bit and groaned, “I think I gotta go.”

Diane and Barbara punched-in. “Are you okay? Are you getting nervous?” they inquired, in the serene tones that marked their past professions.

But before Mary Jane could murmur an answer, the kitchen door swung open and the entire waitstaff paraded out, each carrying a single plate. I knew what was behind this ostensible collegiality; we were the talk of the kitchen, and everyone wanted a closer look.

“Oh, honey,” Kathleen said to our waitress. “My sister's gotta go. Will you please wrap up the chicken parm, the veal, and—what did Barbara get?”

“You mean, now?” the waitress asked.

“My sister has a little anxiety sometimes, and she has to get home.”

Rick shifted in his chair and exhaled slowly. “How can you be so calm?” he whispered to me.

I realized I had been calm. “It's easy, actually. Do something mechanical. Here, just eat. And imagine you're lifting up, out of your body. Float to where that ceiling fan is. Sit up there, on one of the blades of the fan. Just watch everything from up there.”

He looked at me, as if he were trying to figure out whether I was joking.

He didn't have the history, the context needed to comprehend any of this, and I looked over at my family, in a commotion that was like a single frame in an epic film. I could understand them. Mary Jane had been my muse in many ways. She had urged me to go to graduate school in New York, where the city, she knew, would inspire my writing; and we connect, as the artsy ones in the family. For the first time, it struck me that we'd each left New York as our youth was waning. As I was walking Mary Jane out to the car, she spoke softly in my ear. “You don't have to go to anywhere, Buddy, to get an eyeful. Or material. You can't get better than this.” She smiled, and her expression was peaceful and knowing and perhaps apologetic. As their car pulled away, she lifted her hand to sign, “I love you.”

When I got back to the table, Jude said, “Tell Rick about the time you and your friends stole the Baby Jesus from the créche downtown and left a ransom note.”

That was my cue to come down from the ceiling fan, and I took my place with them on the stage.

‹ "Breconshire Drive" by B.J. Hollars up "The Poet and Pajama Man" by Elisabeth Lanser-Rose ›