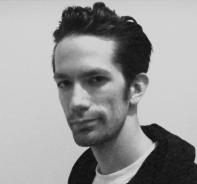 JM Huscher is a writer, editor, and sometimes-illustrator originally from small-town Nebraska. Huscher currently lives in Sacramento, California, where he is working to complete an MA in Creative Writing at the University of California, Davis. Huscher's work has been published in over 20 journals. He has toured and performed extensively—he has presented workshops in 25 states, at seven National Poetry Slams, and in two federal prisons. In his spare time, he restores vintage motorcycles.

JM Huscher's Website
How Tall You Will Stand in the First Night
I.

When I was seven, my father took me to see my first game. When I was nine, he cleaned the sand out of my bloody knee and told me, “Just because Pete Rose slides that way doesn't mean everyone should.” When I was fifteen, I hit a stand up double in the top of the ninth, and as my legs fired like pistons against the sand and clay of the infield, I could hear him screaming for me in the stands. When I was twenty-four, I took him to a Giants game in the city, and I bought my old man an eight dollar pint of Budweiser and a hot dog smothered in onions. Now, at thirty-one, in the first night, I must start somewhere. Unable to locate the beginning, I simply start by walking away from the end.

We measure him in hours when he comes home, but his room filled with boxes and freshly assembled furniture, is empty. A bassinet is still in its packaging, unopened. The receipt neatly taped to the top of it. The onesies still tagged with barcodes are arranged neatly in stacks according to the department stores they came from. “They might not fit,” I had told Ashley. The potential of her belly was ill-defined then—I was still able to imagine taking things back. In the doorway now, I make myself as hollow as the room and ask myself questions as if I was someone else. What have you done? What could you have done? I reach down to pet the dog. Slide my fingers under his collar and rub his shoulders. Feel the muscles that run along his spine. Pull his gums back and feel his wet teeth. Tell him he is smart. Say it in a way that suggests it's something I've discovered in his mouth.

When a car turns in the street, casting its headlights into the room for a second, I remember suddenly that nothing outside has stopped moving. The sound of tires on loose gravel whispers through the windowpanes. How like the low roll of a bonfire. It makes me think of our seats at AT&T Park near the end of the third base line. The constant low rumble of the stadium broke into a unified chant for a full count in the eighth inning. “Schimdt-EEE, Schmidt-EEE, Schmidt-EEE.” When Jason Schmidt caught him looking for a fifteenth K, I stood up and applauded next to my father, whose voice was lost in the crowd. The side had been retired, but I stayed on my feet. I looked up toward the foul pole—dead and yellow and stretching upward like a rope pulled tight—then down at my father, seated. He looked up at me from under an orange cap. I had been trying to say it for hours, but my tongue was heavy with hesitation and fear. “Ash is pregnant,” I finally blurted.

When she calls me to bed, my voice climbs my throat and gets stuck in my teeth. A silent breath slides out into the dark house and, unable to speak, I walk to the bedroom. The dog follows, because that is what he does. The dog with all of his canine intuition is oblivious to the worst parts of me. He loves me and does not care what I have done or not done. Sitting on the edge of the mattress, I reach out to touch Ash's shoulder. I was sitting next to her five months ago when the Frosted Flakes commercial came on. The one with the father showing his son how to field the soft, rolling grounders coming off of the cartoon tiger's bat. When I was twelve, I came home from practice with a black eye. I had to knock the ball down. “I kept it in front of me,” I had said. I thought of the purple bruise during the commercial. “This is the best part,” the boy on TV said, while he sat with his father over two bowls of cereal. I imagined wanting a boy. A son. It was as close as I ever came. I keep my hand on Ashley's shoulder until it feels warm. I stand up. Keep moving.

Before I leave the room, she asks if I'm okay. For the fourth time in my life, I lie to her. I count the lies in my head the way I once counted the players in front of me in the batting order. One: When she guessed her Christmas present in late November. Two: After an argument that is a deep rut in my memory. Three: Several months later, when I said I could imagine picking up the pieces and moving on if she ever left. Now, my voice finally unglues itself and falls out into the silent, dark bedroom. “Had too much coffee in the afternoon. Still wired,” I say. She will translate on her own. I could have told her I don't know. She doesn't know either.

The top and bottom edges of the paper curl up off the flat surface of the dresser. I pick it up. It weighs nothing. The width of a fist. The paper is a thin, glossy plastic, trimmed evenly and carefully. Around the edges of the black and white image, there is the popcorn static I remember from my childhood as the space between television channels. When I carry the picture out of the bedroom, the dog follows, noticeable only by the soft click of his nails on the hardwood floor. In the kitchen now, under the glow of the light above the sink, I trace the shape of the body with my fingertips. When I was nine, I drew baseball stadiums. One batter. One pitcher. One catcher. The ball in flight toward the plate. I filled the rest of the poster-sized, white cardstock paper with the circle shapes of heads. I kneeled on the hardwood floor with a black crayon, giving all of them eyes and a mouth. Giving one of them an orange cap. My father. Candlestick Park could hold sixty-two thousand people. I am afraid of holding one.

I tell myself it is okay to repeat the name in my head. To try and make it real. To pretend that putting the ultrasound down will allow me to forget about it. Setting it down, like drinking, like lying down in the bed, like telling the truth, is not something I will do. Not yet. This is still the beginning. A few weeks after I turned thirty, four months ago, my father sent me a tiny orange cap in the mail. In the card, he had written simply, “for the smallest giant.”

When I continue to walk through the house like I am lost in it, the dog does not lose interest. It follows me. It wants food even though I have already fed it. It wants a treat even though it has not done anything to earn one. In the hallway now, I place my hand flat on the tall doorframe of the extra bedroom. I want to go in, but I feel something I have not felt before. At the base of the throat. Behind my ribs. At the back of the knees. A line I cannot cross. I press the ultrasound against the doorframe, hoping to push the line.

The small paper is still in my hand. I look down at the dog who watches my every move. Watch how he bends his neck toward my hand when I reach down to pet him. How he tilts his head and waits when I stop. How mysterious I must be to him. How like a god. When I was eleven, my father threw a baseball high into the sky above the back yard. I stood under it with my glove open and watched it still climbing. There was a moment when I wondered whether or not it would come back down. How tall the world seemed. How tall the man who could throw like that. I wonder again in the first night about whether or not fatherhood is stronger than gravity. My head tilted back toward the ceiling. The baseball growing smaller and smaller.

I go outside. Close and lock the door behind me. Leave the dog inside. Find my cigarettes buried in the inside pocket of a heavy winter coat. It is okay to repeat the name in my head. Still unable to locate the beginning, I remember the unstoppable momentum of everything. I imagine wanting a son. One night her uncomfortable sleepless shifting woke me, and unable to sleep, I followed an awful train of thought. I imagined the white bed linens streaked pink with blood. A doctor inducing labor after the prolonged silence of the heart rate monitor and the motionless ultrasound. The contractions. The blood and water. The blue body. Ashley's belly. The extra bedroom. Hollow. No names. Relieved, I fell back into a heavy slumber. Under the night, I watch that moment now, falling away from me.

In the third inning, Moises Alou hit a deep fly ball that sailed along the third base line. “Stay fair,” I yelled. “Stay fair,” my father yelled. His eight-dollar beer came dangerously close to spilling as he tried to will the ball into fair territory. It bounced into the second balcony left of the foul pole. Wanting was not enough. The crowd groaned and Alou tapped his bat on the soft infield clay before stepping back into the box.

It comes down to the weight of things. The guilt of a simple daydream. Of wanting. My son asleep in the house.

I let the night fall into my chest. Shiver in the cold. Neck cocked like a pistol hammer. Remember when she told me. Remember when I told him. I smoke a cigarette outside on the curb, and I do not feel guilty about dying any sooner, or turning my teeth yellow. When I was sixteen, I left the house in the middle of the night and drove to the fields where I had once played little league. I climbed the bleachers where my father sat and looked down on the empty, darkened diamond. Just because Pete Rose slides that way doesn't mean everyone should. I smoked stolen cigarettes that night. Four or five in a row. Made myself sick. I tried to imagine feeling tall then. I try to imagine it now, sitting under a row of palm trees that stretch upward, straight, and motionless like steel rods. It is okay to list the names in your head. To give them eyes and a mouth. What have I done? I kept the ball in front of me.