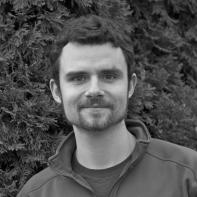 B.J. Hollars is the author of Thirteen Loops: Race, Violence and the Last Lynching in America—the winner of the 2012 Society of Midland Authors Award—and Opening the Doors: The Desegregation of the University of Alabama and the Fight for Tuscaloosa. His collection of stories, Sightings is forthcoming from Indiana University Press/Breakaway Books. He teaches at the University of Wisconsin-Eau Claire.

I shot to Mars but Mars was too close, so I shot to Neptune, instead. And when I saw you there, waving like a prism in your spacesuit, I tried one more planet down.

There was a time, Elizabeth, when we looked up at the sky instead of down at Earth. But after we ended things—after our lucky stars died away—we just stopped looking everywhere all at once. This was followed by apologies, but it wasn't apologies you wanted. You wanted space, so I gave you all I could. Took the first rocket ship to Mars and convinced my lungs to breathe different. Stepped foot into the red desert dust and assured myself it was home.

There was some small comfort in knowing that you were not anywhere. Not in the black rivers I swam in during the days or the red dust I kicked up each night. Probably, you were tucked in some nook far below, skimming the pages of a history book and searching for clues to our future. If my telescope was strong enough I could have seen you there, twisting apple stems and demanding to know if I loved you or loved you not. Ripping petals from flower heads and repeating the question. Flipping coins until our probability improved.

Space was the right idea, and for once, we seemed to be getting over each other so gracefully. I, the scorned suitor light years away, shuffled down those Martian streets at midnight, lit cigarettes beneath those different moons. I bet you looked so arrogant with your gravity. Even that I sacrificed for you.

The night you said you wanted space, I asked how much, and you spread your arms terribly wide. An entire solar system could have fit between them, so I packed a bag and bought a ticket. Put my half of the rent on the kitchen counter. Turned down the thermostat. And for a while it felt like enough space, as if we'd found our proper distance. But then you met me on Mars—your lips shedding like snakeskin—and this time, when you flung your arms wide, it wasn't quite so terrible.

I missed you, you said, and I said no, what you really missed was oxygen.

No, it's you, you promised, and how was I to argue with a woman whose brain was in desperate need of fresh air?

Our bodies began to adjust, just like always, though with each inhale I inhaled what wasn't ours. The foreign air tasted stale inside me, but you swore all we needed was time.

Take off your helmet, you said, and stay awhile.

Elizabeth, how many times will we let our story play out? We are as predictable as an orbit, as obvious as The Big Dipper. Two nights on Mars, and we promised we'd say goodbye for good. You agreed, swearing that you hadn't meant to find me in the first place—"Can't a girl just shoot to Mars?" The problem, of course, was that you did find me, and that you meant to find me, and regardless of any adjustments we made, things just felt different there. Our shadows were shorter on Mars (we were farther from the sun) and even when we looked at each other we were always veiled in dust. On the last night, we gave in and held each other—blamed it on gravitational pull.

I shot to Neptune while you slept—no note, no anything. It was a deep, vast universe, and I never thought you'd track me down again. Neptune was mine, but then your rocket ship landed. You swore it was coincidence—"Of all the gin joints in all the universe…"—but coincidence was never our style. We much preferred relying on star alignment, on dumb luck, complicated formulas of rabbit feet and horseshoes and pennies. Back on Earth, we'd read signs where we shouldn't have, searched through tealeaves for futures we thought had been pre-ordained. We were desperate for someone to tell us we were meant to be, and when the world stayed silent, we turned to the universe.

You apologized on Neptune, calling our breakup a mistake of "galactic proportions." I accepted—"Of course, of course,"—but then I left you there with all those rings and moved on to the next.

On to Pluto, my endless ocean—the last stop on the route. Pluto with its teeth-chattering atmosphere, so cold my ears ache through the helmet.

Dethaw, I think, huddling by the fire, shake these layers of ice.

But I can't shake them, and the harder I try, the tighter they cling to my spacesuit.

Once, back on Earth, you dared me to lick a basketball pole in winter and I stuck there half the night. You left, returning with hot water, and in those days, the last thing we wanted was space. Probably, you would've licked that pole alongside me if I'd asked you; together, we could have waited for the spring.

If I squint now, I can almost see a rocket ship, but I can't wait for it. Who knows if you're even on it—if that's really your helmet pressed tight to the window, or if that's just someone else's glare. But I imagine it's yours, and I imagine you'll leap from that rocket ship all over again, shouting, "Of all the gin joints in all the universe…"

Then, I'll just shoot farther into the dark.

Elizabeth, I admit, Pluto's quite nice this time of year, but not with both of us on it. I wonder if you can see my fire light where you are, or if you're even aiming your telescope my way.

You swear we drifted apart because of the weightlessness, but the weightlessness was never the problem—what we need is to be anchored elsewhere. That is our problem—the elsewhere—and some nights I think I'd be better off floating away on my own.

You said you wanted space so I gave it, but then you took it back. But who are you to shrink the universe? You are not the sun, and worlds will never revolve around you.

Give me my Pluto, and you can have all the rest.

Yes, I have received your message, but given our atmospheric restraints, I find it hard to believe.

Here, when someone says her heart is sinking, the metaphor just doesn't hold up.