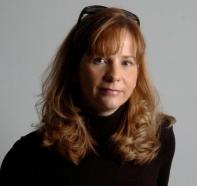 Lori Jakiela is the author of two memoirs – The Bridge to Take When Things Get Serious (C&R Press 2013) and Miss New York Has Everything (Hatchette 2006) – as well as a poetry collection, Spot the Terrorist! (Turning Point 2012). Her essays have been published in The New York Times, The Washington Post, Brevity, Hobart, The Pittsburgh Quarterly, The Pittsburgh Post-Gazette and more. She teaches in the writing programs at Pitt-Greensburg and Chatham University.

Eyes That Have Seen Every Sorrow in the World

I'm afraid my mother will collapse on the way to the car, but she insists on walking without help.

“I said I'm not an invalid,” she says, and looks across the street to be sure no neighbors are watching. “Bring my bag and my pillow. You know I can't sleep on those hospital pillows. They're hard as rocks.”

She's cranky again, a good sign. I follow behind to make sure she doesn't fall. I help her into the car, where she pops the glove compartment and takes out a bottle of baby aspirin. She took nitroglycerine before we left and now it's kicking in. This wipes out the chest pains and replaces them with nausea and a headache.

“I hate all this crap,” my mother says, and leans her head against the window.

We are both calm. We've been through this before, many times. After the first moments of crisis, everything starts to feel like a drill, like something we do in the event of an emergency.

“Business as usual,” my mother says to the doctor who meets us at the emergency room. “Just be sure I don't die in here. I don't like all these white walls. They give me the creeps.”

For years, three things broke up the white on my parents' walls at home—two plastic-framed paintings and a crucifix the size of a ham.

The paintings had been on sale at Woolworth's.

“A steal,” my mother said. “It's not every day you can get great art at that price.”

“Stupidest damn things I've ever seen,” my father said. “My dog can do better than that.”

The paintings were a matched set — two big-eyed moppets dressed as harlequins. One wore pink tights, the other blue. They were sad little girls with mandolins. They had heads like buoys and jellybean feet, and their eyes were black and glossy, as if they'd lived long and seen every sorrow in the world and weren't little girls at all.

As for the crucifix, it hung over my parents' bed. It wasn't what it appeared to be, either.

It was a hollow box. Inside was a bottle of holy water, rosary beads, a vial of oil, two candles, and a prayer book. A Last Rites kit, my mother explained.

“In case the priest doesn't make it in time,” she said as she dusted Jesus' nooks and crannies with a Q-tip. Jesus looked like a bronze dragonfly without wings. He seemed to be shrugging.

“It's good to be prepared,” my mother said.

My father's mother died before I was born. She had a bad heart and died in her sleep while my mother sat next to her in a chair. One minute my grandmother was breathing. Then she wasn't. “I want to go like that,” both my parents would say.

The Last Rites kit had been a gift. My grandmother, my mother's mother, gave it to my parents on their wedding day. She thought this was a good and practical thing. My mother had been sick since birth, and would, years later, have the distinction of being the only person in her family, the only person I knew of, period, to receive Last Rites four times. She'd had her first round when she was eight or nine — heart problems, anemia.

“They didn't know what was wrong with me,” my mother said. “But they were sure I wouldn't make it through the night.”

Someone called the priest, who prayed and poured oil on her forehead and consoled her parents, who'd already picked out a burial plot.

Then my mother got better.

Ten years later, she'd get a visit from a priest again — this time for tuberculosis. She picked it up during her first year of nursing school. She was in isolation. The priest came, the family wept.

My mother got better.

And so, when my parents were married, my grandmother thought the crucifix would be the perfect gift. My grandmother even gave a speech at the reception. “I just want you to know,” she said, and raised a glass to my father. “Enjoy her while you can. She won't live long.”

My mother was anointed two more times, both in a hospital, both because of heart attacks.  All of this has made her seem indestructible, even today when she refused the ambulance, even when I ran red lights and we made it to the hospital in minutes.

But my mother has a living will in her purse.

My hand shakes when I fill out her paperwork.

My father died at home, in a spare bedroom that the hospice nurses had set up like a hospital room. To give my father something to look at, my mother hung a calendar on the wall. It had pictures of teddy bears dressed in prom gowns on it. It was ridiculous, but better than the crucifix or a blank white wall, and my father liked to count the days.

I stayed in the room with him and slept on the loveseat. I knew my father was afraid to die because he told me so, and even though I couldn't do anything about death, I didn't want him to be alone while he waited for it.

I tried not to cry in front of him, but one day, when he was very sick and moving in and out of consciousness, I couldn't help it. I thought he wouldn't notice, and so I sat in a corner of the room and wept. I didn't try to stop it. I must have been making a horrible fuss because my father woke up. He turned his head to me and his eyes seemed bright and lucid, no trace of morphine. He looked at me and smiled and said, “Don't cry, honey. I'm not going anywhere. I'm going to be around.”

I was a child again and he was my father and I believed him.

That was the last conscious thing my father said to me.

The adult in me, the person who'd been giving my father his medications, who'd made decisions about his care and tried to buffer my mother from stress and grief, expected this. The child in me, who lay awake at night and listened to her father breathe, expected him to keep his word.

“I'm fine,” my mother says as she stretches out on the gurney and waits for more blankets and a glass of ginger ale.

The heart monitor beeps and thrums, steady, sure.

‹ "El Khela The Emptiness" by Kelly Cunnane up "Lighten Up, It's Summer" by Paul Lisicky ›