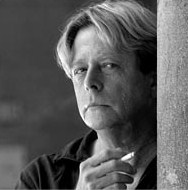 James Nolan's Perpetual Care was awarded the 2009 Next-Generation Indie Book Award for Best Short Story Collection, and his novel Higher Ground won the 2008 William Faulkner-Wisdom Gold Medal. His collections of poetry are Why I Live in the Forest and What Moves Is Not the Wind (Wesleyan), and he has translated Neruda's Stones of the Sky (Copper Canyon) and Longing: Selected Poems of Jaime Gil de Biedma (City Lights). He has received NEA and Fulbright Fellowships, and has taught at universities in New Orleans, San Francisco, Florida, Barcelona, Madrid, and Beijing. A fifth-generation native of the Crescent City, he lives in the French Quarter.

Superstition Review: In a 2008 interview with Susan Larson from The Times-Picayune, you compare your writing to the styles of Lafcadio Hearn, Kate Chopin, and George Washington Cable. Please discuss how these authors influence your own writing.

James Nolan: These were late-19th century writers who shunned the lofty “literary” approaches of their day and dared to write realistically about what was happening under their noses in New Orleans, as shocking or exotic as it may have been. They started the “local colorist” movement, avant-garde for its time, which influenced later regional writers such as Faulkner and Sherwood Anderson. “Local color,” of course, has turned into a kitschy sentimental school, but until recently most American literature was grounded in the regional. Now “regional” means any story not set in Manhattan, and much of what we read has as much a sense of place as an airport departure lounge. My fiction reclaims the regionalism of these 19th century masters, although it couldn't be farther from their styles. Chopin, by the way, was excoriated as an early feminist, and Cable was run out of town for his progressive views on race. The universality of their writing rings true today.

SR: You also mention in the interview that you are “drawn to places like Barcelona, Pondicherry, India, Shanghai-old port cities,” and you have lived in these places as well. Please explain the allure of these cities and how they inspire you.

JN: All port cities share the same family name: Water. They belong more to each other than to the countries they happen to be a part of. Our windows in New Orleans always opened outward to the world, not inward to the landmass behind us. For many years, before moving back home, I lived in Barcelona and San Francisco, where I felt at home among the mussels and crabs, sailors and streetwalkers. Like New Orleans, these cities are as insular as they are cosmopolitan. People are coming and going, and the unexpected is always happening. Stories are in the air.

SR: You have translated the poetry of Pablo Neruda and others into English. What is most challenging about translating works from one language to another?

JN: For Neruda's Stones of the Sky (Copper Canyon), it was capturing the crystalline music of those ringing hymns of geological mysticism. For the Spanish poet Jaime Gil de Biedma's Longing (City Lights) and the Cuban poets I translated for Island of My Hunger (City Lights), the challenge was to capture the disguised political contexts of poets writing under censorship in dictatorships. Anybody with a bilingual dictionary can translate words. The real difficulty is to translate foreign music, secret codes, complex visions, and different worlds into something alive and breathing in English.

SR: Your work, Perpetual Care: Stories showcases various perspectives of New Orleans, your hometown, and the lives its dwellers seek out. How have your own experiences in this city influenced your literary representation?

JN: Like Tangiers and Amsterdam, New Orleans is a Scorpio city, ruled by fixed water and characterized by the forces of sex, death, and regeneration. This is a fertile field for a writer of grotesque fiction such as mine. There are kinky levels, to be sure, and here in the great American brothel, we live off of tourists and conventioneers who come to let down their hair, get drunk and laid in bars that never close. Death and ancestor worship are also central to who we are. I just came back from bringing flowers to my family tombs for All Saints' Day, a ritual I've practiced since I was a boy. When not getting drunk or laid, tourists take cemetery or ghost tours or—sometimes—wind up dead on French Quarter streets. Also associated with the sex and death in this very Catholic city is a powerfully transformative spiritual level. On Halloween there was a voodoo cleansing ritual under my balcony, and Mama Lola came from Haiti to give blessings and dance with a snake in the middle of a drum circle. This, believe it or not, is our annual block party.

SR: In the April 2008 Gambit interview with Caroline Gyvette, you mention that “New Orleans is a very inward-looking city. Especially for us natives, it's easy to get sucked into a nostalgia that doesn't travel well.” With this in mind, how does Perpetual Care transcend this model of traditionally writing about New Orleans? What ideas or feelings can people who are not New Orleans natives relate to?

JN: The most inward-looking, nostalgic book ever written about the city is A Confederacy of Dunces, and John Kennedy Toole killed himself because nobody in New York would publish it. His novel went on to win the Pulitzer Prize, and is a best-selling classic around the world, especially in Germany and Spain, cultures with an innate sense of the grotesque. My students at the University of Barcelona adored it. Other inward-looking, nostalgic books are Don Quixote, Ulysses, The Sound and the Fury, and Remembrance of Things Past, but you don't have to be from Castile, Dublin, Mississippi, or Paris to get them. The universal literary imagination is made up of the most idiosyncratic corners of the human experience. The words either speak to you or they don't. Their power has nothing to do with which place but must proceed deeply fromsome place, the more particular, the better.

SR: In the Gyvette interview you also talk about your feelings of “being rooted” after coming back to New Orleans from years of traveling and living abroad. What aspects of New Orleans prompted your creative writing that you did not find anywhere else?

JN: The Southern penchant for storytelling is what got me going. That, and being immersed again in my own language. I'd never seriously tried my hand at narrative prose before, but how could I not, here where everything becomes a story? And, of course, I could tell the story in the same language in which it happened. Exile is great for poetry, but not for fiction. I'm not sure how Joyce did it, writing about Dublin all those years while living in France and Italy.

SR: Sean Ennis from the Southern Literary Review praises your “impeccable” sentences in Perpetual Care, commenting that “each contains a small surprise, or killer image, or turn of phrase that both moves the story forward and thrills the reader with a poet's economy and precision of language.” What are some of the challenges of writing fiction from writing poetry?

JN: One of the greatest preparations for writing fiction is becoming a competent poet. Once a writer is attuned to the value of each word, of every syllable and nuance and association, he or she is ready to start painting on a larger canvas. The best editor a fiction writer can have is the poet inside.

SR: Your use of humor during dark moments resonates throughout Perpetual Care. Please discuss how humor helps to work through difficult circumstances such as the aftermath of Hurricane Katrina.

JN: Humor provides distance, and recently in New Orleans we need all the distance we can get. At an arts event this month in Seattle, I'll be reading a new story called "The Humongous Hole," a satirical parable about the BP oil spill (available online at www.bilocal.org). Satire was the only way I could address the full horror of what happened in the Gulf of Mexico this summer. Dark, twisted humor is an important part of our sensibility in New Orleans, a mental levee against what tends to happen to us down here. Look at the humor rampant during Mardi Gras. What with hurricanes and oil spills, ignorance and corruption, if we couldn't laugh at our fate, we wouldn't make it.

SR: In Perpetual Care, all of your stories are written pre-Katrina except the last one, and your award-winning manuscript, Higher Ground, is set in post-Katrina. How did this event shape your writing?

JN: It was like living through a war, and as after any war, it takes years for any complex writing about it to be published. Higher Ground (due out next fall from the University of Louisiana at Lafayette Press) isn't a blood-and-guts disaster novel, but the absurdist Catch-22 of the Katrina experience, a comic noir set during the aftermath: John Kennedy Toole meets James M. Cain, as cast by John Waters.

SR: As the director of the Loyola Writing Institute at Loyola University in New Orleans, how have you observed writing as therapeutic for grieving students after Hurricane Katrina?

JN: Right after the hurricane, my workshops were like psychological triage areas, and several important books came out of the classes: Richard Deichmann's Code Blue, by the doctor who orchestrated the evacuation at flooded Memorial Hospital; Sally Forman's Eye of Storm, by the Communications Director at City Hall; Iain Baird's Two Storms, about receiving a cancer diagnosis just after the storm; and soon-to-be published Katrina books by Carolyn Perry and Grace Frisone. When learning to write narrative, it helps to have a compelling story to tell, and these people wrote as if their lives depended on it. Recently I'm conducting the workshops at a new venue, the Arts Council of New Orleans, and for the first time in five years nobody in the group is agonizing over a Katrina saga. That is a welcome milestone.