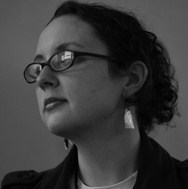 Emilia Phillips is the Associate Editor of Blackbird. Her poetry has recently appeared in 42opus, Adirondack Review, Asheville Poetry Review, Conte, and elsewhere. In July 2009, she was named Cutthroats Discovery Poet, and her chapbook, Strange Meeting, was released in April 2010 by Eureka Press. Phillips is from Chattanooga, Tennessee, but now lives in Richmond, Virginia where she's an MFA candidate at Virginia Commonwealth University. Photograph by Patrick Scott Vickers, 2010.

the tongues of some

their bodies by breaking

bones to scars they kiss

their pride some punks

sheets we may measure

by their size their eyes

with blood no bricks

or chains can hold

these hoods down nor cells

from the ground these men

In the dim garage the license plates hang
on metal hooks fit for curing meat,
ordered by state: Florida & Georgia,
the Carolinas, Tennessee.

At the edges, some are pocked with rust,
all out of date, saved as trophies
for the ones he caught. In the vice,
he tightens wood, for no reason, half-tells stories,

mostly of what they did and what
they deserved. The walls are covered
in tools with heavy heads
& splinter-sheered handles, but mostly unused

hand me downs from his father's father
who no one I knew knew. Old Chase
& Sanborn cans brim with coffee-
black soil or bulbs that sprouted out of season

their wayward green hairs, but rotted
in the damp cool. On the long slender
bench,too many projects left undone-
handfuls of screws & coin like fasteners,

half-built houses for the redbirds & choice
sparrows,radio batteries bleeding their blue
on tooil rags, a brittle box of cartridges, his service
pistol in pieces, each part cleaned until its dullness

is no longer grime, but wear. (What are
we if not a residue milking over everything
as well as the hands that perjure themselves
for what they wipe away?) I know this

man,his steady work, unending
his bicycles draped in old sheets,
some of them my own, hanging like light-
less chandeliers from the ceiling cushioned with pink

insulation,& his hands, bloodless at the surface
of his knuckles, rough as fresh cut wood, & his bullets
pinging their bright fixed
notes as they marble across the cement floor.

First a cup we drink of tap water
from the bathroom faucet of our hotel, room
temperature and unsurprising
as sitting in a just-vacated seat.
I miss the taste of tarnish every day, the mouth-
piece's kiss. Before entering
the white veil of the shower's spray,
you tilt the glass to me. O, charismatic priest-
we're above the city. We haven't touched
the earth in days. Baker pours his voice into “Moon
and Sand,” a clear and golden
oil that wicks in the spiral shells
of our ears. Limb by limb, we wash one another-
We're living three lives-
one whole. The others, merely motor.

As the maids pulled
their carts through the hall, through the peephole,
we watched their nylons slipping
to their ankles, knees rough imperfect
wooden knobs. They're nuns,
int heir black and white, with their foreign
prayers for the guests that leave
the rooms after days a wreck. You receive them
only for towels and sheets. They peek in, each
looking for me in my white dress billowing
over the bed. Nothing can displace the habit here-
the gold bell's ting the deskman hears after returning
home,and the elevator that arrives on a floor,
opening to no one, and yet holds, patient
as heaven, until it's called elsewhere and the doors
close gently like a blind eye's lid.

“It is big enough-just look!”
Says one to the other brother exacting
Hi spupil on the pupil-
SizedBB, and drops it down
The gun's barrel, following with more
From a box, the sound, rain like. If anything,
The chimneys make the black clouds,
Weaving their unfine yarns
Of smoke into the fleece
Covering the city. “Squint

Until everything outside your target
Isa dream…a dream
From which you've awakened and forgotten,
and your target, too, is a dream you've fallen
Into and can't wake from.” And so they go
Releasing bird-
Shot into trees, and from the trees,
The birds which in the low light of winter
Recalled leaves, black and screeching,
As if Death lived in the hollows, and from
The trunk, was released as slow
And gluey sap. The brothers

Piss on their mother's tea
Rose…“Where are you, my chickadees?
My chickadees, where are you?”
She calls from the steaming
Basement window. Stealing into her bathroom,
They unwrap soap from its tidy
Papers…white stone from a sling. Little Davids
Approaching their Goliath,
the trolley due in minutes. They slick
The tracks in the drizzle-
One with the gun over his shoulder,
One with his cap low on his brow.
They were given the names of kings
By their father, now dead. The older, John-
The younger, Charles with thin face.
“Goose, goose,
goose, goose…”

Said the older after his teacher
Sat down the children in her charge
And named him “It”-
To whom all the others gave chase
Ina flock, screeching, their nails unclipped
And tearing at the air,
Reaching for one another.
With the trolley whining on the tracks,
Slipping as it climbs the hill,
Slow and growing slower, the younger
Takes aim-“It is a dream!”-

And the headlight shatters into a rain
Of glass, like a soul fixed in Death
And frozen. Their mother back home stirs
The clothes like a stew, the starch and filth foaming into
A cream. And the steam, and the steam…
Their world is divided
Into alive or dead. They've no governess
Of desire, no pillows stuffed with down.
So many mornings they've awakened
At the same time to birds on their sill
Though the window, fogged or frosted, the birds
Just black, just a form, the birds
Just flying off…

‹ "Animal Studies" by Eric Wertheimer up "The Sullen, Silent Cows" by James Hoggard ›