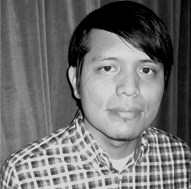 Orlando White is from Tlikan, Arizona. He is Din of the Naaneeshtzhi Tbaah and born for the Naakai Dine. He holds a BFA from the Institute of American Indian Arts and an MFA from Brown University. His poems have appeared in The Florida Review, The Kenyon Review, Ploughshares, Salt Hill Journal, Sentence: A Journal of Prose Poetics, Talking Stick Native Arts Quarterly and elsewhere. He teaches at Din College and lives in Tsaile, Arizona. Bone Light (Red Hen Press, 2009) is his first book.

The page reveals a sketch of letters from
meditation: of an i, the pause between line
and dot, or length of the curve in a j. Space
and stroke determine the ductus of a letter.
And when a circle in thought functions only
as an idea, notarized into paper, it becomes
a gradation of pigments, an absent measure
of thought, an outline of the color white.

Letters will evade and strive
within the labor of words, under
the weight of ink, of languish.
And each alphabet a stapes,
a lilt of sound: curve murmurs
to O and straight quivers
in L. In that moment form
intones, a letter exists in a book,
the cochlea of thought. An impulse
shudders j, its bent leg, leaps out
from a sentence, as i stridulates
its serif points against paper, a deep
trill-silent chirp.

Rip out vertebral column from a q,
snap ribs off an x,
and from its ink skin pull out the skull of an e.
This is why we disembody form from flesh,
a divestment.
How does a letter disjoin itself
when it imprisons its self?
The persistence of composition means
nothing without the shapes of letters.
Because they must wear dark fabric,
pale neckcloths-but now j
dressed in black scrubs,
surgical mask, grasps a dark minute scalpel.
She dissects his disposable head,
so next time you view i,
a body, dot less.

At the end of an expired grammatical idea, a full stop
will augment to an outline of a dried skeleton.
Lay it out on an examination page:
align the remains of accidence
rudiments of syntax to re-ossify these
thought-bones. Affix its appendicular
subject and axial verb
the framework of a vox unit:
with ink-ossein
etch serifs in-between,
draw lacrimal bone-commas
to inchoate its grammar bones
and witness its assemblage discourse.