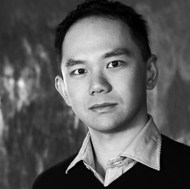 Erick Setiawan was born in 1975 in Jakarta, Indonesia, to Chinese parents and moved to the United States when he was sixteen. He is a graduate of Stanford University and currently lives in San Francisco. Of Bees and Mist, his first novel, has been nominated for QPBs 2010 New Voices Award and longlisted for the 2011 International IMPAC Dublin Literary Award.

Superstition Review: Your online biography mentions that you left Indonesia for the United States when you were just sixteen years old, “[knowing] only three people and barely [speaking] English.” How were you able to manage being immersed in a new country at such a young age away from all that was familiar?

Erick Setiawan: It was desperation, pure and simple. I couldn't see a future for myself in Indonesia, so when I got to the US, I was willing to endure anything as long as I could stay here. Desperation can either drag you down or make you very determined. In my case, thankfully, it was the latter. I was so determined to make it, in fact, that I would allow nothing to stand in my way. Whenever I encountered a setback, I would get angry instead of depressed and fight on. Looking back, I can hardly recognize that very single-minded young boy anymore. He was so unwavering, so willing to knock on doors he'd never knocked on before. If I were to do it now, I don't think I'd have either the focus or the grit to see it through.

SR: When you were accepted into Stanford University, you chose to major in Psychology and Computer Science despite having interests in literature and creative writing. Please discuss why you chose to pursue degrees in the sciences rather than English.

ES: Because I knew they were going to make me speak up in English classes! I was very shy, very insecure about my English, and at Stanford, I was up against some of the brightest minds in the country who could argue about anything all daylong. To my own detriment, I refused to expose myself to that kind of growing, and chose the easy way out. I was always interested in Psychology, so that came naturally. Computer science I picked because I thought it was easy, and you could just go to class and sit without having to say a word. It took me many years (including seven as a software engineer) to finally acknowledge that I had no love for computers, and thankfully, it wasn't too late to change my life then. I still regret that I didn't have more of a formal training in English. But I try to make up for it by reading anything I can get my hands on.

SR: Looking back at your academic experiences in the university, how were you able to practice your creative writing skills when you were on a distinctly different career path?

ES: Again, my reading saved me. Event though I'd made the incredibly foolish decision to stop writing once I chose to pursue computer science, I was still very much in contact with the written word through my reading. I think it was Toni Morrison who said that writing is an extension of reading, and she was absolutely right. Even when you're not composing your own words, by reading you are being immersed in syntax and grammar and metaphors, and you can't help but absorb it all. Reading again saved my life after I began working as an engineer, when I could find nothing but tedium day in and day out. The only thing I looked forward to at the end of the day was picking up a book, and gradually, that ignited my desire to write again.

SR: You relate in an interview with Nick Leshi on his Open Salon blog that you've attempted other novels before the success with Of Bees and Mist. How is Of Bees and Mist different from or similar to your initial writing projects? What makes it unique from your other endeavors?

ES: I was willing to take more risks with Of Bees and Mist, and I wasn't afraid to go down paths that I wasn't comfortable exploring before. Also, by the time I got to Bees, I'd been practicing writing (on the sly, no less) for five or six years while working as a software engineer, so I knew more about the craft than when I started. I taught myself how to create characters that might resonate with readers, and the writing itself was different, more assured and precise. As cliché as it sounds, I felt that I'd found my voice. One thing I didn't do that might have helped me considerably was I didn't join a writing group or even tell anyone that I was writing a book. My shyness prevented it. Had I done it, I might have discovered a wonderful mentor or two along the way.

SR: In the Nick Leshi interview, you also mention that because of the prominent anti-Chinese sentiment in Indonesia, “for many years I couldn't find an outlet for all that cultural stuff that was building up inside of me.” What are some of the benefits and/or challenges of writing as opposed to orally relating these events?

ES: I think committing something to paper gives it more power, more authority, than simply recounting it orally. There is something about the written word that arrests people more than speech. Also, writing lasts longer than a talk or a discussion, and has the potential to reach more people. Once you pass a story along orally, it becomes second-hand, and it brings up questions of authenticity, but if you pass a piece of writing around,it's still original, and the experience it describes remains authentic. But then again I'm writer, not a politician, so of course I'm biased.

SR: From your article, “My Grandmother's Reign of Terror,” in a March 2010 issue ofThe Guardian, I can see how Of Bees and Mist is in some ways autobiographical. What are the ways in which you insert yourself in the text other than as the observing narrator?

ES: There are traces of me in all the characters. I was Noah when I was little, observing the battle between my mom and my paternal grandmother, with my dad stuck in the middle. I can also understand how Gabriel's pride gets the better of him, or Eva's vindictiveness—we all have these dark sides inside ourselves in varying degrees. And I think that's the key to creating relatable characters. They may be deeply flawed or deeply unpleasant, but if you as the author can put yourself in their shoes, then your readers will also feel a connection to them. It does not excuse their bad behavior, but it sheds some light on their innermost workings, and hopefully we can learn a thing or two from their mistakes.

SR: In the article from The Guardian you relate the antagonistic, matriarchal structure in your family's history. How has Of Bees and Mist allowed you to reconcile a childhood terror of your grandmother's antagonism?

ES: Writing the book allowed me to view the past from a distance, and it allowed me to see my grandmother with a bit of perspective. Once I understood her fears and insecurities, and what demons were plaguing her to do the things she did, I grew compassion for her, even sympathy, which I did not have when I was growing up. So writing the book was cathartic for me. Instead of thinking of my grandmother as an out-and-out bad seed, I was able to view her as a very unhappy woman, who turned her dissatisfaction with life into endless grudges against her family.

SR: Christine Thomas from The San Francisco Chronicle praises the “intriguing landscape” in Of Bees and Mist as well as the “luxuriously paced descriptions and whimsical, inventive devices.” Indeed, the “simple narrative,” she recalls “is a magical realism hybrid…” What is it about the elements of magical realism that best suit your writing project?

ES:Magical realism gave me the freedom to venture outside boundaries, which I think is perfect when you are exploring relationships and emotions as I did in the book. The heart of the book, to me, is still the relationships between the characters, not the magic. But set against the backdrop of magic, the unfolding drama takes on a whole different meaning, and it acquires certain nuances that would not be possible if I were to tell the story in a straightforward fashion. At the same time, the realism part keeps it grounded. Readers can still place themselves in the characters' world even though it is odd and different, because it still bears resemblance to the world we know.

SR: With respect to Of Bees and Mist's setting, Carolyn See from The Washington Post cites you commenting that “I began to look for a setting that could capture my various cultural influences…” and moreover, “where someone of diverse origins like myself would feel at home and not be considered an outsider.” Please elaborate on your decision to write for the fiction genre to relate your experiences instead of strictly autobiographic, nonfiction, or even a poetic approach.

ES: I knew it had to be fiction, because honestly, I don't think my life is all that interesting, certainly not enough to fill up an autobiography. So I knew I had to make stuff up, and that left me with fiction. I have the highest regard for nonfiction writers, but I don't think I'll ever write one myself. Fiction gives you the latitude to explore, to imagine, to fabricate, and that's what I love about it. As for poetry, I can't write it. Prose-poetry is one thing, but strict poetry with the rhymes and the meters I can't do. In away it's good to know that I can only write fiction since it saves me time from trying my hand on other things and failing.

SR: It seems that you would have so much insight to offer aspiring writers as well as inspiration for non-academically trained writers. Would you ever consider leading writing workshops or even teaching university writing courses? What are your future plans with your writing career?

ES: I definitely would if the right opportunity comes along and there are people who are willing to listen to me. I am working on the next book at the moment, which is still in the beginning stages. My plan for the future is to keep writing, and getting better at it.