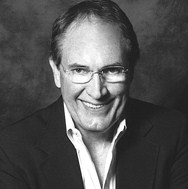 James Hoggard's work has recently appeared in Harvard Review, Southwest Review, Translation Review, Mississippi Review, Massachusetts Review, and numerous others. Author of nineteen books, he won the PEN Southwest Poetry Award for 2007. His most recent books are Wearing the River and Triangles of Light: The Edward Hopper Poems. He's the Perkins-Prothro Distinguished Professor of English at Midwestern State University in Wichita Falls, Texas.

A word I've never used before
will soon appear in these short lines,
and it will yield an image that
will draw me far away from here
into a smallish straw-floored place,
a cowshed, and though I'm not there
I have been there and milked cows there
and felt the agitated brush
of tails against my face and smelled
the sharp ripe smells of steaming piss,
ammonia scents that burn their way
up in your head, and I have seen
cows sull: they'll turn dead weight and balk,
though they might also kick you hard.
That teaches you you cannot read
their eyes, but you still watch their eyes
and wonder if this beast's as calm
as it looks blank, so calmly blank,
or will some rage burst wildly free
from some deep pit of sullenness
that might well say that silence might
not signal anything that we
can ever understand as peace?

‹ Four poems by Emilia Phillips up "Xenoglossia" by J.C. Pankratz ›