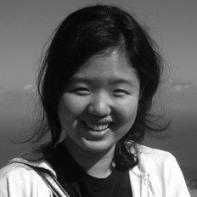 Rosanna Oh has studied poetry at Yale University as an English Major in the Writing Concentration, at Cambridge University, and at Johns Hopkins University, where she is currently a poet in the Writing Seminars. Oh's poems have appeared in The Connecticut River Review, The Alleghany Review, Cha Magazine, and Memoir (and) Magazine, where she is now an editor. She has been awarded a scholarship from The New York State Writers Institute and a first place award from The Connecticut Poetry Society. Most recently, Oh has been nominated for a Pushcart Prize and for Best of the Net.

As he witnessed her dying, my father
asked his mother what she wanted to eat.

Under the dim light, her eyes swelled
into crepuscular bulbs,
the dried fruit of her lips contracted in anticipation-

Rayfish: it took him hours to find it.
In the end, my father bought the bull ray frozen,
its cerulean skin studded with salt and cabochons of ice,
the spine and tail
straight in the plastic bag. Thawed on the table,
the head shone like a greasy mound of candle wax,
the cartilage of its skull springy.
In the afternoon sun,
the wings wilted like great cabbage leaves,
the sinewy drama of its rhomboidal body gone slack.

For weeks I visited the ray on the windowsill.
Don't touch it! my father said.
The house smelled fiercely of ammonia
as the carcass fermented.

My father holds the steamed meat now in a spoon.
She leans forward, rolling the bits in her mouth with her tongue.

She waits for more-
he tears more in his hands.

In the early half-light, the dust motes flicker about,
swelling in stinky huffs of sausage grease and onions. Outside,
the snow is deburring the pines
and the congress of yellow warblers in the window
sits supreme and unperturbed.

You are closer to them, frying eggs on the stove.
Eat your breakfast, you say. Even in the heat,
you are wearing a floor-length bathrobe,
one shoulder baring a mustard-colored bra strap.

The dust stops falling from the ceiling.
The lights flash on and off. Blonde and alone
in your bathing suit, you stand on the sloping cliff,
nipples as rigid as butterscotch drops,
facing the mountains and redwoods.
You greet me on the lakeshore, long-legged
and trembling.

Can there be any more dust?
I wonder (but I don't ask). The birds are gone
and you are having your coffee by the fridge.

Hungry, I pull the grey hair out of an egg yolk, shellacked in yellow,
and begin to eat.

Now that it is almost winter, the ravens
have begun their migration to a place I have taken care to forget.
Crab-like, barbarian, they scuttle
back and forth in the high trees,
cawing staccato to one another, frantic,
as though this part is new.

But to the west, the sky has become strange -
the cumulus clouds look like series of sheep.
Crowing louder and louder,
the ravens think they are outnumbered.

And you Freya, how you would insist on your swans,
conveniently beautiful, your companions
through the years, obedient,
their grand wings settling into serene wetland.

Look at the clouds, they have scattered-
in their triumph, the ravens depart into the night,
echoing one another to remember the way home.