"At Nile Badrawi" by Amanda Fields 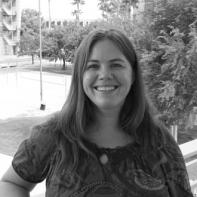 Amanda Fields work has been published in Indiana Review, Brevity, and The Compact Reader: Short Essays by Method and Theme. She earned an MFA from The University of Minnesota and an MA in English from Iowa State University, and she is pursuing a PhD in Rhetoric, Composition, and the Teaching of English at The University of Arizona. From 2006-2010, she taught writing at The American University in Cairo, Egypt, and she co-authors the blog When in Cairo.

At the Nile Badrawi hospital in Cairo, the patients sit in rows of linked blue chairs. All of us are riveted to the television: the red carpet interviews of an Arabic awards show, where starlets have donned sparkling gowns, fake black eyelashes, and mounds of foundation.

Most of the women in the gynecology clinic are wearing niqab (even their hands, in long black gloves, exquisitely fetishized), are pregnant, and are accompanied by men. Occasionally, a doctor strolls through the waiting room, smoking a pipe and gesturing for a woman to follow him. Soon, my doctor — the only female gynecologist in Egypt, it seems — wears loose sandwich gloves to prod me. She then tells me to take a test tube full of potential problems to the lab.

As I leave the clinic with the tube, a family emerges from the elevator — first, a young man with frosted jeans and a tight orange shirt, hair fused with gel. Two women follow. The man is holding a baby carrier. I look at it, prepared to smile maternally, but it's empty.

He swings the plastic carrier toward me and says something in Arabic that I don't understand. I shake my head. He repeats it and veers closer. Then I catch enough words to know he is offering to impregnate me.

I contemplate doing my best to shame him, but my throat sticks when I notice that the women are looking at the floor. I cannot see their faces, only their veiled heads. And I can manage only a disapproving look at the offending twit, far from the withering stare I've perfected in the years I have lived in Egypt. The young man laughs me into the elevator, where I am suddenly unable to even greet the operator, an old man sitting on a stool.

Just a few hours before, I had stood on the side of the Nile corniche getting scolded by a taxi driver, who had transformed a ten minute ride into five, slinging us around every car in his path, honking and yelling and gesturing and nearly slamming into another taxi with untethered oriental rugs on its luggage rack. He was even bothering the Egyptian drivers — that's how bad he was.

And then the pink monstrosity of the Nile Badrawi hospital had emerged, bulging next to the slums, and the driver screeched across three lanes of traffic, braking next to a policeman who was idling on the gravel road to the hospital.

I got out and gave the driver ten Egyptian pounds. In Cairo, at least up until recently when the government subsidized brand-new taxis, meters aren't used. If you live there long enough, you know what a fair payment is, and you simply hand over the cash.

But, as I began to walk away, I heard, "Hey!" in all its shining American rudeness. The driver had turned in his seat. Disdainfully, he held out the ten-pound note with one hand and gave me the thumb and first two fingers gesture that can mean many things in Egypt. It can simply mean, "Wait." It can mean, "Settle down here everybody; there's no reason to fight." It can mean, "I'm gonna keep driving whether you get out of my way or not."

I love and hate that gesture. In this case, it seemed to mean, “You've insulted me with this paltry sum, you stupid, rich, American woman.”

I found myself rearing up, getting aggressive — something I have learned to do from living in Cairo, where people are actually not very aggressive. What I mean might best be illustrated by this: I used to live in a neighborhood called Zamalek. One night I watched two men in a heated argument. They were standing on either side of a car. As the argument escalated, they both made that Cairene gesture, reaching over the roof of the car to meet in the middle, thumbs and first two fingers sealed together. Their knuckles slightly shook against each other, as if glued. Everyone on the street watched, ready to step in if it got out of control, and I, beer in hand, watched from a seventh floor apartment. The two men eventually broke from each other's grip, exhausted as if they had actually had a fight.

And yet, almost invariably, Americans ask if I am scared to live in Cairo, if I am scared of the people. And sometimes I want to say, Look, I was more scared when I watched West Side Story. But I don't say that.

The taxi driver yelled, “Hey!” then "Xamas-taashar!" in Arabic. He wanted fifteen pounds for a five-pound ride.

I stuck my thumb and fingers together and held them in the air. "What? For five minutes? La-a.” No, with emphasis.

And I sure felt proud of myself as I walked away, with all the men on the street staring at me, even the policeman pausing from collecting bribes. It was a stupid pride, arrogant, some might say a Western or privileged pride, but this lady took it.

In the elevator, I think of those women in the hallway, with that man who volunteered to impregnate me. It isn't the first time such an offer has happened, but that is another taxi, another story, another day, and it is only me and another prig of a man encountering each other in a series of cultural misunderstandings.

I don't even remember what the women look like, as much as I can conjure a specific vision of the young man. The women — they wouldn't look at me. Maybe it was they who caused my words to stick in my throat.

‹ Nonfiction up "I Need a Miracle" by Brenda Miller ›