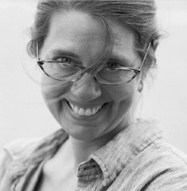 Sally Ball is the author of Annus Mirabilis (NY: Barrow Street Press, 2005). She is also the associate director of Four Way Books and an assistant professor of English at Arizona State University. Her recent poems have appeared or are forthcoming in The American Poetry Review, Pleiades, The Southern Review, and on Narrative.com.

Will / Fate / Chance
--three heads, three tails
swallowed in one knot: ouroboros
of responsibility. I'm not sure
what my interest even yields….

For example, why does anything happen?
The why accounts for what percent
of our reply? And which aspects
of the why--, aren't some in you
and some in me? Aren't they nearly infinite?

Pain is pain, you said. As if the thicket
of its sources in which we've lost ourselves
won't teach us anything--

what we find here
must cut us, but also doesn't matter?
Sometimes I fear I've been
a baby or a hypocrite.
All pout or all projection.

It's the “all” in Williams that confounds me:
We love each other because we will it so.
Yes, of course. But past all accident?
Accident is everywhere
and yet the doctor means beyond it.
Not a victory of will, some deeper helplessness.

The Great Beyonder, said that psychic
after showing me the horse.

Oh love, come with me.

Their two minds in sync, the horse
accepts the rider;
they address each other in the field
like angels: all telepathic
via the tingling
electrons both take as proof
of--is it “rightness”?

It's a dream, so the saddle
can be pushed aside, not lost,
against the rules of gravity and sense.
There must be a shift, though, in the lope,
from fully dreamed to partly willed:

the rider wakes, notices details. Legs firm
around the horse's scudding ribs. We flee
from waking, flee unto our headlong better selves,
isn't that it?--in the dream,

nothing rules out union.

After the call that went nowhere--
although it led him into the cold garage (alarming chill,
halting breath), over the elegant bridge

(the beauty of the night, and of the bridge itself,
fused with the burgeoning fear, We're here, we're here),
into the fluorescent, airless hospital (paperwork, forms, drips)

and then out of the surgical garments,
woozy with Atavan, back to the same house,
in his same form--

after all of that, he said, suddenly,
just as we were starting to hang up:
The thing about it... I kept thinking

…for each act that causes a crisis of air,
chaos of not enough, last time for each tool
that imposes distance between crises--

Though it wasn't. False alarm.
Still the general notion is a true one:
one night soon, he'll never have those lungs again.

Days later, I asked my mother
how it was, when the call came.
She asked if I remembered the August night

the neighbor's house burned down--
smoke billowing, Dad worried about the air,
his house. So they arrived.

He wore the loose green cap, hospital gown, began
those dripping meds. Then, at six or so,
at dawn, No, no match. Come on then, home.