"Lighten Up, It's Summer" by Paul Lisicky 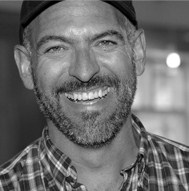 Paul Lisicky is the author of Lawnboy, Famous Builder, and two forthcoming books: The Burning House (novel, 2011) and Unbuilt Projects (short prose pieces, 2012). His work has appeared in Ploughshares, The Iowa Review, Five Points, The Seattle Review, Black Warrior Review, Brevity, Story Quarterly, Lo-Ball, and other magazines and anthologies. He's taught in the graduate writing programs at Cornell University, Rutgers-Newark, and Sarah Lawrence College. He currently teaches at NYU and in the low residency MFA Program at Fairfield University. He lives in New York City.

Lighten Up, It's Summer!  F

The renters recline in their lounge chairs around the pool. The heat's a little much. No wind shifts the leaves on the trees, and who could blame anyone for staying in one place all day? Hours must be filled, magazines flipped through and dropped. Someone says ass, which brings on some laughs. Someone says Britney, which brings on some more. Though none of the laughter suggests the jokes are very funny, not that they're supposed to be. The vodka gets stronger in the glasses. The blue of the pool should shut up. The silence in the woods asks something of them. That something might hurt, which is why the pool speakers kick on, not just a little loud, but loud enough to shake the minds of the people in the house next door, to let everyone know they're here and have each other. It's not music than anyone likes—that would be missing the point. Songs aren't meant to be remembered late at night when you're trying to fall asleep because, let's face it, time's an illusion that's meant to be conquered. Someone says, Lindsay Lohan. Laughter vibrates in six sets of vocal chords, in unison. If it were up to me, I'd kill every animal on this island! And they go on like this and on like this. All in a day's work, really, for it takes great energy and patience to drain yourself of feeling, to nod and blink exactly to your neighbor's rhythm.

A little past noon, a rustling inside the woods. A creature stands inside the clearing, hoof tapping the ground like some polished black boot. Phantom? Beast? No, deer-but not like the deer grazing the sides of the road. Hairy, thick through the ribs, he leaps over the bubbling hot tub, legs practically flying over their faces until he lands on the deck with a crack. Someone shrieks. They laugh, because they're afraid not to laugh. All that motion! That tail! Why them? Then he looks at their bare feet with a snort, turning his neck to the left before he's off again, out and away, nothing left of his presence but the faintest scent of barnyard and leaves. The now is what they're after. The now tries very hard to hold on to what it has without breaking. The now concentrates like a bead of rainwater, poised on the edge of a fig leaf, focusing itself so it won't fall into the pool.

“Listen,” he says. 'What may be the nature of objects considered as things in themselves and without reference to the receptivity of our sensibility is quite unknown to us.'”

All five stare at Number 1 as if he's wearing last year's swimsuit. Inside out, no less.

The sun refuses movement. The heat's a little much. They go on like this and on like this. Boys of shadow, boys of noon: who's the one who told you the self's just one more thing to lose?

The Queen of It

Bathroom: once a day, whether they had to go or not.

What else could we have expected of a teacher who stood in front of the class, reaching into the waste can as if it were a magic hat? A paper plane with a crooked nose. A math assignment with a flying squirrel sketched in the margins. Two bright green stalks on a page torn from a spiral-bound notebook. Waste of good paper! she'd cry. See what I have to do when I could be teaching you? And the children looked to the thin window in the door with terror and a twinge of excitement as the principal passed them by.

My brother wasn't shy. Didn't he hide inside the cloakroom while Mrs. Jovanovic squatted beneath his desk, crying, Where is he? Where is he? But he wasn't one to call attention to himself, so he came up with a plan. If he peed, just a single drop at a time, in his chair, over the course of an afternoon, he could outsmart any of them. The wood wouldn't know. His pants wouldn't know. The children to the left and right of him—even the humming lights over his head wouldn't know. He'd be dry as bread before he had to stand up again. And Mrs. Jovanovic? Well, let her think she knew a thing or two. I don't have to tell you that my brother lost his cover one day. His name in the air, Mrs. Jovanovic summoning him up to the blackboard, and what was that down there? Eyes fixed forward, he walked ahead, shutting his ears to the sounds of the heater. He picked up the chalk, added the figures, three plus seven, correctly. He stood there a second. He put down the chalk. And went back to his chair with such calm that no one even noticed the soaked spot on the front of his pants, not even Mrs. Jovanovic, who blinked some, her head down, before she lifted her face and called for another. At the same time, two classrooms away, Lily Cronin sat in her beanie and swamped skirt, taking a bite out of an American cheese sandwich. She chewed much longer than necessary. She regarded us mildly, from her perch at the back of the room, as we filed past her on the way to recess, as if we were there to honor her. I couldn't take my eyes off her cool white skin, her tartan scarf, the eraser-colored spots around the sides of her nose, maybe because she couldn't stop looking at us. She didn't seem to worry that her mother was probably taking the long, pretty way to school, beneath the elms, past the creek where the water smelled rotten, like food. She didn't seem to worry about what we'd say on the playground outside. Lily had her sandwich, after all, which lasted all day in her hand. And the children, of course, who were nothing more than the moving figures of her attention.

She knew she'd changed everything in that room. It was hers now. She was the queen of it, and more.

My brother? He disappeared, a little at a time, until all that was left was a sweater, a nest of fuzz and hair and threads. We gave them everything they asked for. We were good that way.