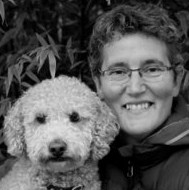 Gretchen Dietz earned an MFA in creative nonfiction from Goucher College in Baltimore, Maryland. Her work has been published in CALYX Journal and The Sun Magazine. She lives in Seattle. Washington with her partner Ann and their blogging dog, Rubin. Gretchen owns a dog-walking business, Wags n Words, as well as working at Wellsprings K9, a water and massage therapy pool for dogs. She is currently working on a collection of essays for her book, To Walk with Dog. Her essay "Let Go, Let Dog" is the first in the series.

I'm lost. The sun is sinking low behind the tall fir trees and I can feel the temperature dropping. When I first set out on the trail, I had to stop for a moment and collect my directional memory. I've walked these twenty miles of park paths on Washington's Olympic Peninsula many times, but it's been five years since my last visit. Now, two hours in, I can't remember which path connects with which or which direction leads me out of the woods. I'm lost and though I'm not yet panicking, I'm none too pleased with my dilemma.

Meanwhile, Abbie my seven-year old mutt is romping through the undergrowth hunting critters. “Come on, Abs,” I say to her, “I need your help.” Her black, white-tipped tail wags in a circle, winding up her excitement. She leaps over a small branch and then speeds down the trail toward me, her toothy smile so large on her black face it almost glows in the dimming light.

There are three choices ahead of us—continue to move forward on the same trail, take the one to the right, or turn around and see if we can retrace my steps back to the truck. Instead, I'm stuck, standing at the crossroads unable to decide and muttering to myself. Why did you start so late in the day? Why didn't you grab the map from the glove compartment? What the hell were you thinking?

Abbie's directional memory is more accessible than my own. If I am to avoid a night in the woods, I'll need her help. Obediently, she arrives at my side, her head cocked, waiting for direction. “To the truck, Abbie, find the truck,” I command and she turns her head from one path to the next then confidently decides.

She puts her nose to the ground and moves forward. We head to the right—a trail that ascends sharply past moss-covered boulders and tall, straight cedars. This would not be my choice. I follow, though I have my doubts. I've chosen wrong trails before and ended up in boggy ravines on paths overgrown with painful blackberries and burning nettles or found myself on trails that lead me out of the park and into the open properties of some interesting backwoods characters.Abbie has been my guide on many adventures leading me with her confident enthusiasm to swim in the frigid waters of Puget Sound, search the woods behind our house for owls well after midnight, and hike up jagged, rocky peaks throughout the Olympic Mountains. I have placed my faith in her many times and she knows, with every glance back, I will put my faith in her memory and her nose yet again.

Faith. Believing without proof. Trusting without concrete evidence. A leap.

I have never been good at faith. It smacks of fanatical religions and zealots who believe the earth was created in just under a week. Faith is for the unquestioning, for those who find comfort in blindly trusting words and beliefs set down by others—higher powers and an unforgiving god. I have avoided such doctrine my entire life and the older I get, the less likely I am to crossover.

Still, I have faith in my dog. Not religious, but perhaps something close to reverence. She moves through life guided by her nose—a structure designed for precise if not direct navigation. I've watched Abbie find a crumb in tall grass or her favorite ball lost somewhere in the house. I've seen her track the scent of an elk, find a dead cat in thick underbrush, and lead me to an injured lamb far out in the pasture.Throughout my life I've been more inclined to follow a dog than any god. And now, as we weave our way up a twisting switchback, the blue hue of evening surrounding us, I try to slip from my human senses controlled by my dependence on sight and over-thinking and sense the world with my nose.

At first, the world just smells of wet and dirt. I can't detect any subtleties and I certainly can't find a direction in the thick layers of damp spring air. My nose feels overwhelmed and my brain deciphers the information with generalizations. Abbie's nose unearths layers of scents. Her brain is solely focused on translating the details of both the trail and her memory of it. She interprets significant pieces and circles back to unravel the threads. I look at the world with my eyes, though unlike my dog, I place value and judgment on that visual information based on my experiences and interactions with the world. I am dependent on my sight. As the evening fades to black, my eyes aren't much help and so I turn to my dog instead of prayer.

Not that I haven't tried to believe in god. I tried as a young child praying to something or someone I thought could save me from my choices. These were silent prayers whispered late at night. Dear God, I promise never to hit my sister again if you keep me from being punished now. I tried as a teenager following my best friend to church gatherings and summer camps hoping to fit in and feel the power of “being saved.” I tried as an adult attending New Age fellowships where “everyone is welcome” hoping to find the true essence of my spiritual nature.

But enlightenment remained elusive and with it my grasp of faith. The closest I've ever come to a spiritual awakening was high atop a mountain in Alaska where the world of melting glaciers and rocky, snow-covered peaks rose from the earth and begged for my devotion. From that moment, I knew if I had any faith it would be based in the solid foundation of geology and geography, biology and botany and the often unexplainable intricacy of the natural world.

And in my dog.

As we ascend the trail, I close my eyes and attempt to trust my nose. Wet and dirt dominate. I concentrate on moving my thoughts from my head to my body and for a moment something sweet sweeps past me. Before I can control my reaction, I open my eyes and search the underbrush for the scent. There are trillium just about to bloom hidden under salal bushes. Farther off the trail I see the pink hint of rhododendron blossoms. Blackberry vines tangle with the branches of Oregon grape, but the fruit is still green. My brain kicks into rationalizations switching my senses away from my nose and back to my eyes.

Aware of my frustration, Abbie circles back to me. “It's okay, girl,” I tell her, “Find the truck. Where's the truck?” She does not over-think the world. She does not doubt her sensory input. Instead she builds a map in her head, a map built on scent and time. She places no value on rhododendron blooms or the prick of the blackberry vines. They are simply markers connecting us to now—a now where I am lost and she is not. It doesn't matter that the last time she scented this trail was five years ago or that layers of seasonal detritus clutter the memory. For her the path is not determined by point A and point B. It is determined by intricate information gathered through her nose and filtered through my command. “Find the truck” is her only guidance. Instantly, she culls through every scent and moves forward.

I follow and do my best not to allow worry to dominate my thoughts. The sliver of sky just above my head is blue-black and the first star sputters weakly. The sweat on my back is cooling against my skin. I'm glad for the hat on my head, but I am slightly desperate for a sign of something familiar. Lost in my thoughts, I hear Abbie bark—one determined woof signaling her confidence. I look up from the path and do my best to catch a glimpse of her blackness ahead on the trail.

Then I hear her racing toward me and spot the white splotch on the tip of her tail. She touches my hand with her wet nose and then gallops back up the path. A tree root grabs my boot and I stumble slightly before I see the outline of a split rail fence just at the edge of the woods. The boundary, I think. By the time I reach Abbie at the top of a short slope, I know where I am. Another crossroads presents itself, but this time we both know that the truck is parked about a half mile to the left. “Good dog,” I tell her, rubbing the side of her neck with praise and relief. She barks again, proud and happy, and bounces down the trail toward the truck.

As we drive home, Abbie lays across the bench seat, her soft black head in my lap. I can feel the red flush of my cheeks as the truck heater burns off the chill of our adventure. The cab smells of moss and cedar, century-old humus and wet dog. My own pungent sweat rises up from the warm scent of my old, wool sweater. Abbie stretches her legs as she nuzzles into sleep, a deep sigh lifts her chest and a contented moan escapes.

I sigh, too—found and in fellowship with dog.