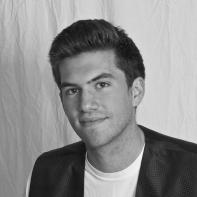 Connor Syrewicz's work has appeared in Reed Magazine as well as a number of print and internet publications located in the greater Binghamton and Hudson Valley areas. He was raised on Long Island and is currently studying literary theory and creative writing as an undergraduate at Binghamton University.

George Willoughby will be a great theorist and philosopher. In his spirited defense of post-structuralism in cultural studies, brought to the fore most explicitly in his seminal essay “The Limits and Effect of Semiotic Discourse in the Phenomenology of the 'Techno-Queen' Era,” he will bring about an epochal shift that will forever affect dominant hegemony to the point of being an implicit factor in the formation of the self and thus eventually unread and forgotten in every way but nuance and implication; “Willoughbean” being the academic term for it, a motion both macro and micro that will run not like a ripple in a quiet pond but like the grinding and disorganizing of a rat's body in a very old machine.

In contrast to general theory that intelligence is a hindrance to personal sanctity and happiness, George Willoughby will be pleasant and affable, laughing along with much simpler people than himself, knowing them not simpler only less observed, sometimes feeling so ecstatic that he will be wont to scream in crowded bars or restaurants, “Tomorrow 'dun gone” pitching his bald head back and laughing with a sense of love that will make his colleagues sneer with contempt, whispering to each other “We cannot trust him,” which Willoughby will notice but not refute, smiling after each encounter that will force the notion upon him, like the lonely smile of a pastor finding a newborn on the steps of a church.

George Willoughby is not a great theorist and philosopher. He is a child on his mother's tiled floor, stacking plastic donuts, grinding his teeth because of an anxiety not the result of a particular trauma but the collective trauma of new life lived in the chaos of Queens, a chaos that has no hope of legitimizing itself, finding any self-respect, near the dissonant din of Manhattan; at this distance, a quiet, decomposing sound. George Willoughby cannot speak and is having a difficult time, it seems, stacking donuts; his mother stands idly watching, smoking a cigarette because her husband isn't home, and talking to George because he hasn't yet ears to listen.

“My asshole's not forever”—death's not the same as it was then, even the constant changes, the light at the end of the tunnel always a different color. She takes a long drag of her cigarette, some ash falls on her dress which she does not bother to brush off. Her skin is dirty and porous, fingernails are bitten as far as teeth can reach, some outlined in dried blood from when she went at the cuticles. A few of her toes are hard and cracked, the nails, yellow and erupting, nearly falling off. Her legs are all bone; always have been, always will be.

She sits down at the kitchen table, an old wooden thing, topped with one of those near-plastic table-cloths, littered with a brief-toothy skyline. “Aren't I something?” she says, her jaw hanging from her face like an old tire. “I've had some doubts”—not doubting enough to be serious, of course, but serious enough to be doubting—“but I am something”—God's written on my forehead. George looks at the kitchen floor, to him not hard nor brown nor smooth nor tiled, hardly a floor at all. He is growing out of his pants, his shirt too, both hand-me-downs from a distant cousin; his arms and face are fat from his days as a parasite, milky, “If-only,” kinds of days when, to him, his mother was not breaking nor breathing nor shitting nor smiling, hardly a person at all.

“But”—What he's written? “My asshole's not forever”—How the hell should I know? She checks her face in the mirror, applies moisturizer, late-night-twenty-dollar-anti-aging-peel-back-time-like-the-unbruised-skin-of-a-florida-orange kind of stuff, and frowns a disappointed kind of frown like a young man might after bedding a new wife for the first time.

She turns, looking at a door nearly hidden by the refrigerator, hearing a television, a sitcom: studio laughter, a celebrity voice, timed speech, joke-laugh-repeat. She closes her eyes and listens, working class concerns fitting between stock photos—a sunset, a beach, a flower, an open field—until interrupted by a loud knocking on the front door, the apartment small enough that the whole neighborhood seems to shake. “Willerbe” a woman mumbles, quiet but annoyed. She knocks for a long while before George's mother answers.

“Sorry there ma'am, was fast asleep. What can I do you for?”

"I can come back if this is not a good time,” the woman says, pushing past her into the apartment.

“Good a time as any. How are you, Marge? Didn't expect you anytime soon.”

“No? The rent was due a few weeks ago. Didn't think I'd be round to collect?”

“Rent? My husband told me he paid.”

“No, no. Haven't seen him in at least two months. I considered going into collections but I thought that I would come round here to see if you had it before starting any fuss,” she says, a self-satisfied smile passing across her face, knowing there are only a few ways things like this can go.

“He told me he paid. Maybe he slipped something under your door? A wire transfer? Have you checked Western Union? A money order?”

“This is a surprise, not in any of the plans,” she says with a distraught kind of look.

“Well you see ma'am. George has been sick—”

“Oh? George sick? Let me see the little guy.” She picks him up by the waist. “Hello there,” she says, touching his nose against hers. She is an especially round woman, early forties, balding. Half of her face sags down paralyzed so she has to talk from one side of her mouth.

“One cup shouldn't hurt. Milk and sugar,” she says, putting George down as he starts to cry, and sits at the table. “He seems alright to me.” She picks an electric cigarette out of her pocket and starts to suck.

Pouring coffee, his mother says, “Thank God, the last week has been just hell. The hospital where we're taking him has nearly wiped us clean. No insurance. Charged $18,000 for just half an hour with a doctor and a shot of Motrin. Debt for life. Going to pay the bastards $10 a month. Nothing more.”

“Sorry to hear it but that doesn't settle anything.”

“You are out for blood.”

“No, just what you owe me. It's out of my hands, you see. A lease is a lease.” Some coffee falls out of the side of her mouth as she takes a sip.

“Let me get you something,” George's mother reaches for a towel from the sink. “It will be alright,” she says and whispers something into Marge's ear. There is whiskey on her breath, a telling kind of tone. She touches Marge's breast with a certain tenderness, the fingertips drawing small circles on a smooth surface like still water or new sheets or leather couches or shaved faces or fresh paint.

George's crying dies and he notices a cracked door nearly hidden by the refrigerator, not really a cracked door; a white frame, a dark strip, flashing lights, a machine kind of sound. A voice? No, almost. Joke-laugh-repeat. Leaning and pushing off the ground, he stands and begins to make his way towards it, an uneasy kind of stride that would make the gait of a drunk man look like a straight line.

Nearing the door, he suddenly falls, opening it with his head. An old man is watching television. He sees the door open but can't see George over the edge of the bed. Thinking death is upon him, a thought too often thought—a faded record, a tired cliché—the old man begins to pray “Our fodder whose art i' ebbin 'allowed be thy fame.” He tries to cross his hands over his chest but grimaces and cries after moving an arm covered in bloody sores. He attacks the wall with the back of his head, defecating and crying. Spit hangs from George's mouth like a ripe fruit: this man is not yet broken, the smell not yet repulsive, the constant sounds of death not yet anything to fuss over. He makes a rejoicing kind of sound, “Gah,” and throws his arms in the air.

Back in the kitchen, George notices two figures attached at the head. Something crawling from his mother's mouth, a tongue slipping across broken lips—connections made—hands and breasts and fat, two machines slipping in and out of each other. Marge's eyes roll back and suddenly she is up, knocking things from the table, a hand on her chest panting, her hair out of order. “You will have the rent when you have it,” she mumbles, leaving the door open.

“There's always tomorrow,” George's mother yells after her. Taking a few drags off the electric cigarette, she grimaces at the smell of feces. She notices George in the doorway and says, “Goodness,” in frustration.

As she is cleaning, George's father steps in. “Home has never been such a homely girl,” he says when he notices the mess of the table and the smell.

“His eyes are wide open, arms reaching for the ceiling. It's just... revolting.”

“Well, how much dignity can you really have when—”

“Death is thrust upon you. Not all that awful actually.”

They embrace and begin to dance, slow at first and then faster, their feet making hard sounds across the hardwood and tile. They are happy and begin to rejoice. George, feeling the sublimity of the moment, starts singing with a waxy voice like a 40's crooner. He starts with something simple—something on their terms—he thinks, for a mild crowd that wants to laugh and cry and join the angels someday.

They dance furiously until George begins a scat section. His rhythm and meter become erratic, his tonal contrasts and scales break away from any structures and suppositions. His body moves and flows, baby fat meeting the air lazily, shaking with pure transcendence.

His father's eyes grow wide and then shrink into shadow, his mother bites her finger nails. They begin to pass a few sideways glances like the motion of a door. They whisper to themselves, “Perhaps,” “Maybe,” and laugh quietly until George is embarrassed, ending the moment completely, feeling the awful repugnance of walls he cannot help seeing until exalted—his parents screaming “again” as George, the will-be-late-great theorist and philosopher, sighs with a deep misunderstanding that will someday fade under the weight of that quiet way we have of judging ourselves, groping out like newborns at that moment when you couldn't tell if a doctor was delivering a child or putting one back in.

‹ "The Front," by Allyson Stack up "The Only" by Courtney Elizabeth Mauk ›