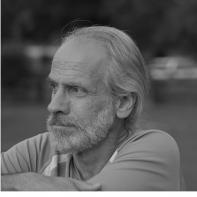 J. Malcolm Garcia is the author of Khaarijee: A Chronicle of Friendship and War in Kabul (Beacon 2009), and his articles have been featured in Best American Travel Writing and Best American Nonrequired Reading.

We prepare to go out on a night patrol.

The captain however must pick up an Afghan policeman first. On paper, the American and European soldiers of the international security forces provide a “supportive role” only to the central Afghan government. Therefore, protocols require an Afghan police officer to lead patrols, the captain explains to me, an embedded reporter. He calls me by my last name as he does his soldiers, and tells me to ride with him.

We leave Camp Julien in south Kabul for the District Four police station in a convoy of four Humvees, six soldiers in each vehicle. The dawn light rinses the sky with an umbrella of pink light, and then the light fades almost instantly and the sky darkens to an impenetrable depth without stars. Kids wave to us from the shadows as they always do when we go out on a night patrol, but it seems to me they also have one hand behind their back, and sometimes I'm right because I'll hear the rocks they throw ding against our doors.

“Last week on our way out, this kid was throwing rocks at me,” a soldier tells me. “In Iraq, parents'd beat the shit out of their kids for doing that. This kid didn't look slow. It's not like he's a retard.  If that's how a kid thinks about us what about his dad?”

“It's a game dude,” another soldier says. “How many rocks do they have to throw to make a gunner duck.” “They need to start a baseball league here then. He was whizzing them.”

The dirt road we follow climbs a hill. A stone castle swarmed by birds circling its broken towers overlooks our progress.

“In Bosnia, we had Kurds, Muslims,” a soldier seated behind me says.  “Here it's everybody. In Bosnia, we tried to study the enemy. Here, we try to figure out who the enemy is. We're all scared. This is not our country, not our culture. Going out at night in town with all these people with weapons; it's very different for us. My gun is nothing compared to their cache of rocket-propelled grenades. The minute we stop being scared is the time something will happen.”

We continue driving until we reach the ruins of a square cinder block building. An oil lamp lights one small window. We stop and get out, stones crunching beneath our boots. We hear someone approaching and then a man in a green uniform materializes before us like a mirage come whole, illuminated by our headlights.

“Who are you?” he asks our translator.

The captain shows him a paper.

“What do you need?” he asks glancing at the paper.

“We need a police officer on our patrol,” our captain says through the translator.

“Which spot is your patrol?”

He turns around and disappears into the dark. He returns a short time later-first the sound of his boots and then the sight of him again materializing in the headlights—-with a short thin man in a green jacket much too large for his narrow body. His pants form pools of cloth around his ankles, and mud boots his sandals. Patchy stubble mars his face like a burn. He introduces himself; Saif Ali.

Without another word, he gets in the front seat of my vehicle and sits next to the captain beside the passenger door. He turns around to shake hands. He does not distinguish me, the American reporter in the backseat wearing a helmet and Kevlar, from the other soldiers in the Humvee.

We start up again and follow a narrow stone road that takes us behind the police station and into some woods.  The opaque shapes of leafless trees loom above us. Dogs bark in a disjointed chorus. Mud huts stand stark and mute in the sweep of our headlights. We cross a bridge, listen to water rushing invisibly beneath us until we reach a checkpoint. A man on a cot outside a shack kicks out from some blankets and waves us through.

The captain tells me we have entered a bad area. Lots of robberies. But we should be fine because we won't be stopping to do foot patrols. Don't need to. We're on a “presence” patrol only. We're not to do anything. People just need to see us drive through and know we're here, nothing more.

The captain turns on the headlamp to illuminate Saif so the locals can see him. Saif stares out the windshield and raises a hand and smiles as if to reassure anyone watching us. Veiled women appear fleetingly on the side of the road revealed by the sweep of our headlights. Stooped old men hold the hands of boys and watch us without expression turning their heads slowly as if pressured by a heavy wind. Ribbed dogs snap at things in the rushing gutters.

The crackling of the radio pulls our attention away from the road. A static-filled voice shouts that an unexploded ordinance has been found outside the Canadian Embassy in downtown Kabul. We're needed to assist in cordoning off streets around the embassy while engineers from a Canadian security detail detonate the ordinance.

The captain orders the driver to stop. We slow to a halt. Dust swirls enveloping us as if we had been consumed by a gray cloud . The radio makes sporadic hissing sounds and then the hissing stops altogether. The captain looks at Saif. No unauthorized national is allowed to enter an international staffed security cordon. Saif's police station is in the opposite direction of the embassy. We don't have time to drop him off, the captain says.

“In the vic behind us, sir,” a soldier says.

The captain shrugs. “Thank you,” he says reaching over Saif and opening his door. “Thank you.”

Saif doesn't move. He looks at the captain, head cocked to one side, “what?” written all over his face.

“Thank you,” the captain says again and shoves him.  Saif shifts away, moves one leg out the door and looks at the captain and says something that sounds like a question but none of us can understand him.

“Thank you!” the captain snaps pushing Saif the rest of the way out the door.  Saif waves his arms to keep balance but collapses in the dirt. A soldier beside me gets out, steps over Saif and sits in his seat, and slams the door shut.

Twenty minutes later, we arrive at the Canadian Embassy and take positions at two intersections. An electrical storm quakes the sky and the ground appears to shudder beneath our feet. We wait for the engineers from the security detail to disarm and remove the ordinance.

To break the monotony, we shout, “Thank you,” back and forth to each other because really there was something hilarious about the captain dumping Saif off like that.

After a while, we stop shouting, “thank you” having wrung the joke of all its humor, ground into the tedium of waiting. We get quiet and become irritable, and we shrug off the children clutching at our pants begging. In the silence, I think of Saif, the look on his face.

We were out of there so fast. Did Saif make it back to the police station? I don't know. I do know we left him in our dust, and he scrambled backward crab-like as our Humvees spewed stones and raced past him. I turned around and watched Saif staring after us, staring through me, the what look on his face changed to fury. Then he was swallowed whole into the night as in a movie when the camera pulls back and the image left behind shrinks in an ever tightening circle of dimming light.

I mill around the perimeter of the Canadian Embassy in what feels to be an endless night. A dirty moon holds the sky. The silence fills spaces. That look of Saif's. It bores into me still more than an hour later, a presence demanding to be addressed. The Captain decided to toss you out, Saif, not me.  What could I have done? I am not a soldier.

Saif's expression does not change. When the captain dumped him in the middle of nowhere, the captain became anyone of us.