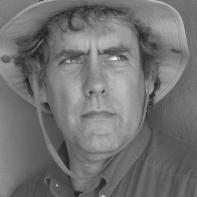 John M. Anderson teaches at Boston College. Featured in both Poetry Daily and Verse Daily, he has new poems in Poetry Northwest, Spillway, Tuesday: An Art Project, and Crazyhorse —plus a canyonland chapbook, Dictionary Quilt (Pudding House, 2007). His manuscript Alamos: A Chain Reaction is a ghost story in verse about J. Robert Oppenheimer and the landscape of the American Southwest.

Weeks before His Own Death, Oppenheimer Learns of the Fire on Apollo 1
January 27, 1967

Three astronauts in an Apollo capsule die
burning at the top of a laddered gantry that leans silver against the simple
blue of the Florida sky. I'm growing sentimental,

but it seems a medieval
crucifixion master's rendering of the Trinity tower.
The gadget was our cratered goal, our planetarium model we

hung like a clumsy portent from the highest bough.
Wilson said we should fly
a few Japanese witnesses out to see the test-and never

need to use the thing in anger. What if it was a dud? I said.
“Then we could kill them all.”
He was appalled by his own answer. We all were.

My friends, it was Nothing. Nothing. Like riding a nag
across the Death

Valley of the evening sky. Like church forever. And after
an Eternity of that

I came across the one bitty pillar of smoke a lonely campfire sends
to God. Just thin

as that. Gemini Christmas, ladies! Man weighed
115 is all. Spindliest

bigtop tent depending on him where he stood there,
gentleman smoking.

And this was before he even died! I had not been
among the dead long

when I decided to go see how the end of everything
and all was coming.

It was in good hands is all I can say. Seems he'd squeezed
the universe into a ball

size of a grapefruit of Plutonium and meant it
smaller still. Eyeball.

call it? Gloaming? Not that. Daemmerung! Swung to his feet like that.
Woke him up.

Now see I can't recall, my fellow Congressmen, what all—
anything like all—

we said to one another in the conversation that followed his
record high jump.

Conversation protected under hero-demiurge confidentiality.
He swore an oath,

did he. Did Oppie. Swore and swore an oath and smoldered,
mesquite fire alone.

All night right there,
American. And not many of the stars in the night sky can say that.

They're smart. So smart. Two old men in their leather
pants, packing weapons, fingers to their unshaven
jaws. They know where I'm going before I do.

But they're slow. They cannot make their see-through
fingers do what they want them to. Stand there
mute. They know their way around Cajun, know

curses in German, can manage to trade or fight in one or two
American Indian tongues. They're patient as a withdrawing
sea, as night. But the powdering chalk can't write

on the fresh-washed board. Their eloquent, old-fashioned eyes
look, look at my gestures. Gadget, mesa, hold, grapefruit.
They know. They see the moon beginning to rise behind me,

Toni's Ghost, Lovely,
as ever, rocks before a beach shack fronting the Crab nebula

My father in the desert stood,

the one element still
in that perfect

chaos of purposeful
hurry. The sun

rose and set and the wheel
spun. He was

fulfilling her destiny pricked
her finger on.

And everyone sleeps.
The corporal

at attention in the front gate
snuffles uneasy

and snores. The couples
making hay between

and Hall the traitors slept,
smearing their reports

to the Kremlin with infant
slobber. General Groves

slumbered, and only his honor,
always alert, paced

the compound vigilant. It was December
7. It was 1944 for

a hundred years. My father was
the needle's almost

in the high desert air. I don't remember
anything about

our time there. It was all Intimations
Ode to me, “trailing

clouds of glory,” “a sleep and a forgetting.”
I came to

myself later in the shadow of the white-
washed Washington

Monument. I was the reflecting pool, lying
like a shadow

beneath it. Peter walked away, I
could not. I winter

here. I summer in the Horsehead nebula.
It's summer there

a long time, cool as a rose
marble dawn on St. John.

‹ Three poems by John A. Nieves up Four poems by Julie Hensley ›