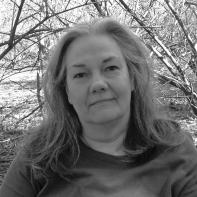 Lori Brack's poems are recently published or forthcoming in Another Chicago Magazine, Mid-American Review, Weave, burntdistrict, The Prose-Poem Project, Miracle Monocle, and the anthology Begin Again. Other publications include Packingtown Review, Rosebud, North American Review and her 2010 chapbook, A Fine Place to See the Sky, published by The Field School, New York. The chapbook is a poetic script for a work of performance art, Farmers Dream, in collaboration with artist Ernesto Pujol.

A Scholar of Disorder

Sun slants a four o'clock path across his desk and fall's chilly dusk murmurs its first word. This late and still so much to do: another letter, fitted to the paper, its ragged margins. The detective has acquired a magician's reputation in the halls of the dead letter branch. When some junior member is stumped, the detective is summoned to decipher the envelope — fingerprint smudges and ghosts of lines, brown ink spilled in one corner, a blotch the shape of a bird's heart. He squints to read the names, faded as the lives. He bends nearer to the page, his heart whispering in his wrists.

The Dead Letter Detective Dreams Of

He wakes mid-dream as morning intervenes. By the time he's drinking tea, last night's drama — a cast of thousands, the connections among them — has flown and church bells ring the early hour. Awake, or nearly, he knots the tie around his neck, puts out a dish of milk for the stray cat. His pillow keeps its dent all day, soft cradle, tender bodhisattva, its hollow a gesture he pounds flat each night.

Cottonwoods show their palms
to him in the flicker of breeze

Bessie blue. He writes a postcard
in a hand he practiced back at his desk,

by dinnertime light. He looks up
into the frondy flanks of the mountain

straining to see the past in windy calico,
reeking doeskin. He could swear

a chronicle of footfall, extinction of paw.
Time and distance. Those old two.

Memory of the Green Office

The desks are green. The floors. The rank
of files against one wall and light
falling through blinds, underwater
green, pond green where turtles emerge
with algae dripping and spring frogs
sing like a machine. Even the machines
are green — the hulking typewriter,
the primitive calculator on its own
green cart. He is a swimmer as he
navigates the aroma of carbon
paper and siftings of cigarette ash,
kicks his feet to draw closer
to the rolling chair covered in green
where he remembers his father
grinning at him from behind columns
of numbers that wave now
like water plants, where everything
except him knows how to breathe.