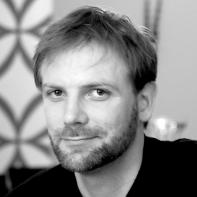 Andrew Porter is the author of the short story collection The Theory of Light and Matter, which won the Flannery O'Connor Award for Short Fiction, and the novel, In Between Days, forthcoming from Knopf in Fall 2012. His short fiction has appeared in One Story, The Threepenny Review, Epoch, and The Pushcart Prize Anthology and on NPR's Selected Shorts. A graduate of the Iowa Writers' Workshop, he has received a James Michener/ Copernicus Fellowship, the W.K. Rose Fellowship, and the Drake Emerging Writer Award. Currently, he's an Associate Professor of Creative Writing at Trinity University in San Antonio.

This interview was conducted through email by Interview Coordinator Erin Caldwell. She says of the process, "Andrew Porter writes stories about teenagers and suburbia...well. He handles this topic with lovely, heartbreaking, cliché-free scenarios. My copy of The Theory of Light and Matter has since been passed to two other people, and though I'm happy to share his stories, I can't wait to get it back. Here, Mr. Porter discusses his collection, process, and craft."

Superstition Review: The Theory of Light and Matter is a collection of short stories that beautifully convey various coming-of-age scenes in modern America. Teenagers and grown-ups who act like teenagers engage in distinct family dramas. What attracted you to this theme? What do you hope your readers will gain from reading these stories?

Andrew Porter: I think my interest in writing stories about younger characters probably stems from my interest in reading a lot of coming-of-age stories when I was first starting out as a writer. Writers like Junot Diaz, Stephanie Vaughn, and Tobias Wolff were all very important to me back then, and I remember at that time, and even years later, trying very hard to evoke that same sense of wonderment, and uncertainty, and innocence that I found in their stories. As for what I hope readers will gain from reading my own stories, well, I suppose I can only hope that they feel a similar type of recognition, something that helps them recall their own memories of that strange, uncertain time.

SR: Your characters seem to learn a lot about the way the world works without leaving their homes and cities, creating a theme of stagnant transformation. What is the significance of this? How has this theme interacted with your own life?

AP: A lot of my characters tend to be haunted by memories from the past, and so I suppose one of the ways I try to reinforce this theme is by having the characters remain in the same setting where these events from the past occurred. In this sense, the setting helps to underscore the fact that these memories are still very much present for the character. So yes, in this way whatever transformation occurs tends to occur without the character ever actually leaving that setting. As for parallels with my own life, I can only say that the settings of my stories tend to be settings that have held a special significance for me at one time or another, places that have stayed with me over the years, if only in memory.

SR: Within your depictions of suburban life in various US cities, there is beauty in the mundane and sadness around many corners. Why is this contradiction important to present to your readers?

AP: I've always been attracted to stories that one might describe as both beautiful and sad. Maybe I spent too much time listening to The Cure when I was in high school, or watching Ingmar Bergman films when I was in college, but I think some of the saddest stories I've encountered are also some of the most beautiful. To put it another way, I think there's a big difference between a sad story and a depressing story. As long as there's beauty in the work—whether it be the cinematography in a movie or the language in a novel—then it's never really depressing to me. It may be sad, but as long as there's beauty there, it's never depressing. And so, to answer your question, I suppose that's something I try to capture in my own work: moments of unexpected beauty in what might otherwise seem like ordinary, mundane or even sad situations.

SR: Which comes first: the action of the story, or the emotion you wish your readers to experience?

SR: What drew you to the short story form? Are there any other literary forms that you pursue, or are interested in pursuing?

AP: I think what I like most about short stories is the emphasis on character over plot. Even when I first started writing fiction back in college, I was never really drawn to elaborate plots, which is one of the reasons that my bookshelves were always filled with short story collections instead of novels. Of course, I don't mean to suggest that short stories don't have plots, only that their plots tend to be somewhat minimal—maybe a few brief episodes or scenes in a character's life. Now that I'm older, however, I've gained a much greater appreciation for the novel form and for the particular challenges of this form. To answer your second question, I recently completed my first novel, which will be published in September, and am looking forward to working on some personal essay projects as well.

SR: When did you know that you wanted to write? What significant events and people helped cement this desire? What would you be doing if not writing?

AP: That's always a difficult question to answer. I first started writing fiction back in college, but it wasn't until I entered graduate school that I actually began to consider pursuing writing seriously as a career. Up until that point, I still had a number of back up options—law school, teaching, etc.—but I think that being around so many other serious writers at that time (not just my professors, but also my fellow students) really helped to cement the idea that this wasn't just a pipe dream of mine, but something I might actually be able to do—if I was willing to put in the time, that is, and if I was willing to accept some of the sacrifices that one typically has to make. If I was not writing, what would I be doing? Well, that's an even harder question to answer. I'd like to think that I'd still be doing something creative with my life, but it's hard to say.

SR: Are you a daily writer? What kind of space and time do you devote to your craft?

AP: I try to be a daily writer. Even during those times when my life is very busy, I try to write for at least a few hours each day. Over the years, I've found that it really helps to have a routine, and in my case that usuaully means waking up early, making some coffee, reading for about twenty minutes, then sitting down to write for as long as I can. If I have a lot on my plate that day, I might have to wake up a little earlier than usual, and of course some days I really don't accomplish that much, but as long as I stick with it, as long as I keep up the routine, I eventually get things done.

SR: Among other acknowledgments, you thank your time studying at the Iowa Writer's Workshop for the creation of this collection. How did your writing process evolve during your academics? Do you feel that graduate school is important for an aspiring writer? Why or why not?

AP: I think it really depends on the writer. In my case, it was important for me only because I went to graduate school so young. At that time—I was only 23—I didn't have the courage or the confidence to just move to some random city and start writing on my own. I didn't really have a support sytem of writer friends and I certainly didn't have a lot of people in my life who really understood what I was doing. So, in this way, being part of a larger community of like-minded people, people who shared my commitment and interests, was extremely important to me.

SR: In your opening acknowledgements, you refer to the publications that have shown your work “in slightly different form." What is your revision process like? How long does it take? How do you know when a story is finished?

AP: When I'm lucky, the revision process is very quick and painless, but unfortunately that's not the case most of the time. Most of the time it takes me at least a year, and sometimes several years, to actually complete a story. During that time, I'm simply going over the language word by word, line by line, paragraph by paragraph. I'm trying to get the sentences to sound right to my ear, trying to bring out different aspects of the characters' personalities, tweaking the dialogue, adjusting the pacing, etc. I also tend to work in spurts. I'll work on a story for about two or three weeks, then put it away for a while, pull it out again and start all over with fresh eyes. Over the years, I think the main lesson I've learned is that's important to be patient and not rush the process. Every story takes a different amount of time to reveal itself to you, and it's not something that you, as a writer, can really control.

SR: What authors or literary figures have inspired you throughout your writing career? Who inspires you now?

AP: I've been influenced by so many writers over the years that it's really hard for me to narrow it down to a short list. That said, some of the important ones would definitely be Dostoevsky, Richard Yates, John Cheever, Raymond Carver, Stephanie Vaughn, Marilynne Robinson, Richard Bausch and Junot Diaz. As for current influences, Maile Meloy, Julie Orringer, Charles D'Ambrosio and Dan Chaon are all writers whose work inspires me. And, of course, many of my old friends from grad school: Holiday Reinhorn, Jonathan Blum, Peter Orner, Kevin Brockmeier, and Amber Dermont, whose first novel, The Starboard Sea, was just released this month.