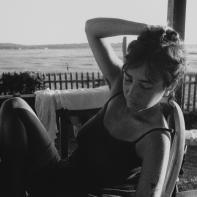 Mandy Keifetz lives in Brooklyn. Her work has appeared in Penthouse, Vogue, the Review of Contemporary Fiction, the Comics Journal, and many others. Corrido, her first novel, was selected as a best first novel out of New York by the Library Journal. Entertainment Weekly called it “an intoxicating cocktail of sex and death.” Her second novel Flea Circus: A Brief Bestiary of Grief won the 2010 AWP Award in fiction and was published by New Issues. Keifetz was a Fellow with the New York Foundation for the Arts in 2002, and her plays have been staged in London, Cambridge, Oslo and New York.

This interview was conducted through email by Interview Editor Erin Caldwell. She says of the process, "I was immediately intrigued by Mandy Keifetz writing style in Flea Circus: A Brief Bestiary of Grief. In it, the protagonist uses the alphabet to chronicle the loss of her boyfriend to suicide. The story-telling is full of beautiful and rough language. Here, Ms. Keifetz talks about the creation of this award-winning novel and her other literary pursuits."

Superstition Review: Your most recent book Flea Circus: A Brief Bestiary of Grief is a lovely mix of lyrical imagery and striking prose. The protagonist's grief is described over the course of a wandering and stilted narrative. When, and how, did you develop this unique style of writing? In what ways has your style evolved since writing Corrido?

MK: I don't guess writers are the best judges of the evolution of their own style, so take this with a grain of salt: But I don't see much difference between them. Maybe because the protagonists are so often either hallucinating or consuming psychotropic drugs in Corrido, it is easier to compartmentalize the lyrical moments as just, you know, “trippy.” But the writing in Corrido gets plenty weird (“lyrical,” if you prefer—that's lovely and thank you for it). To me, it is, in fact, more often lyrical—and hyperbolic and over-the-top—because I had less control then. I wrote that book twenty years ago. Still, I refer you to the sentence my boyfriend at the time called “the weird sentence:”

“Three fates: Jonas Mekas, Max Weber and the bird-faced progeny of the consanguine.”

SR: Your prose work has been described as “experimental.” How do you feel about this designation? Is there freedom in genre-bending, or higher expectations?

MK: I fear this will sound cantankerous—which is decidedly not how I feel—but I do not concern myself with how my work is described. I don't mean that I am not interested in hearing about how my work strikes people—of course I am, else why do it at all?—but rather, that when I sit down to write, I am concerned wholly and only with staring into my own stygian psyche and transcribing what percolates to the surface. If I took other people's taxonomies into that process, I don't think the transcription would go very smoothly. That said, yes, I am comfortable with being called “experimental.” I am also comfortable with “literary crime-fiction,” “hard-boiled,” “drunken,” “sexy,” “violent,” “punk rock,” and “weird.” If, on the other hand, someone described my work as, say, “witty, warm and wise women's fiction” I'd be utterly perplexed.

SR: In Flea Circus, themes of death and mourning are explored through Izzy's inability to overcome her boyfriend's suicide. She wanders through the alphabet while navigating her grief. What is the significance of this correlation? What do you hope readers will gain from her emotional experience?

MK: The use of the bestiary form grew out of the writing process, so I can't claim a planned correlation. But I suppose the alphabet is a very basic way of sorting, of imposing some order—and that is what Izzy is attempting to do. Impose some order, any order, on the encroaching chaos in her head.

I hope the readers gain first and foremost the pleasure of being lost in a novel. But to the extent that any book about suicide is, by its nature, a cautionary tale, I hope they will see her thinking for the madness that it is intended to be. It is not a good idea to drive your car into a wall.

SR: It's interesting that you created Izzy as a “Jersey Girl” when you are a self-proclaimed New Yorker. Is this an important distinction to make? Why? Where did you draw your inspiration for her?

MK: The distinction has largely to do with cars. Cars are not a meaningful part of life in New York City. I myself can barely drive one. But cars—very fast powerful ones—are an important element in this story. I drew my Jersey inspiration from my long, complex, and often fraught relationship with the denizens of a NJ radio station called WFMU. And from my cousin, the documentary filmmaker Laura Israel. And from a couple of dear friends who worked with me at a movie theatre and often regaled provincial city-kid me with stories of their Jersey exploits. Most of it, however, as will be obvious to actual Jersey folk, I simply made up.

SR: The book is full of obscure fact nuggets, from entomology to cars, math, and stock transfers. What kind of research went into your creation of Flea Circus? How much of this knowledge is derived from your own experience?

MK: How much is derived from my personal experience? Approximately none. Research is the fun part.

SR: Along with your books, you have published a number of pieces in a variety of magazines and have written plays staged around the world. This is pretty prolific! Describe how your writing processes for each differ. How has each informed the others? Are there any other literary forms you are interested in pursuing?

MK: All plays are a collective endeavor and more than half of mine were explicitly collective in that the scripts were devised through work with the actors. The difference between one person telling a story (as in the writing of a novel) and many people telling a story (as in the production of a play) is about as stark a difference as I can think of. I hardly even think of them as allied disciplines. Writing theatre is more fun, less lonely—and you get to witness the audiences responses right there in the moment, which is very exciting if you spend, as I do, most of your time imagining someone reading a book of yours, throwing it across the room and hitting the dog. But you have to give the story you want to tell over to glittery, capering alchemists.

I am at work on a collection of intricately metered verse.

SR: With each different forum for your work comes a different editor and set of criteria. How does your writing process differ for each genre, editor, and audience?

MK: My fiction—and verse—writing process is its own animal. I don't think it has changed much since I wrote my first story at three, no matter the editor, genre or audience—these all strike me as incidental. The differences in writing for the theater we've covered above.

SR: You also judge the occasional MFA dissertation, and raise a young child. How do your academic, personal, and writing goals interact?

MK: I don't really have an academic life. I would gladly teach, if I could support myself doing it, although I myself am a finishing school drop-out. But I am a practiced and careful reader and when someone asks me to be on his or her panel, I am always thrilled to oblige. I find the discussions intense and exciting and find that I am met with equal force—which how I like most of my encounters.

It is important to me and to my husband that our daughter see us laboring for art's glories as well as for the drudgeries of commerce. But indeed, we have no idea how to balance these three things—it's all we can do to resolve to fail better tomorrow, to borrow a phrase from Beckett.

SR: When did you begin writing, and when did you know you wanted to be a writer? What significant events and people helped cement this desire?

SR: What authors, playwrights, and other literary figures inspire you?

MK: In no particular order: