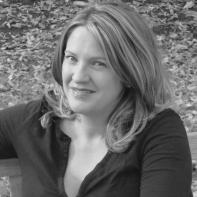 Julie Hensley grew up on a sheep farm in the Shenandoah Valley, but now makes her home in Kentucky with her husband (the writer R. Dean Johnson) and their two children. She is a core faculty member of the Bluegrass Writers Studio, the brief-residency MFA program at Eastern Kentucky University. Julie won The Southern Women Writers Emerging Voice Award in both fiction (2005) and poetry (2009). Her work has been nominated for the Pushcart Anthology and regularly appears in a variety of journals, most recently in PoemMemiorStory, The Pinch, Blackbird, and Louisville Review. Her chapbook of poems, The Language of Horses, is available from Finishing Line Press.

Before Nohl Bought the Boat

She liked fishing better
back when it began
with a walk
through cow pasture or forest-tangle—
branches from last year’s flood,
shredded tarp, bed springs—
her sneakers sinking
into silt, his hand
on the small of her back,
guiding her
through catbrier, over slippery rocks.
Back then, the woods would open
suddenly into the river’s green light,
as if every time they were coming
across something secret,
something theirs alone.
He had a net,
made from seine and old coat hangers,
and he would run
through the brush along the shore,
kicking over stones,
raising helgamites
out of the damp leaves.
He slid a Budweiser from each pocket,
wedged the cans
together where the water pooled cold.
How she craved it:
the feel of a small mouth
on the line,
the sudden weight
twisting and roiling (like the baby
who, by April, heaved deep
inside her), the flip and whir of the reel.
That first spring,
when she could only see the river
from its edges, standing
next to Nohl on sun-warm rock
and casting herself into that other
world, she had no idea
how long the Shenandoah really was,
how deep and slow moving, as it flowed
over limestone caverns,
or how, years later, her heart
would bend on itself, split-shot
like a lead sinker.

The last day of doe season,
she watches Nohl notch the kill tag
and tie it fast around the animal’s back leg.
He pauses to secure his red bandanna
to the branch of an overhead cedar.
Then he begins at the breastbone.
“Just like a zipper,” he says, pressing his knife upward
toward the hide and splitting the abdominal wall
wide open. She tries to pay attention
as he explains how he is tying off
the rectal and reproductive tracts,
but so much of the work happens out of sight,
inside the body cavity where cartilage cracks
beneath Nohl’s pale wrists. She can only guess
at organs spilled forth across snow-crusted leaves
until he extracts something—purple, fist-shaped—
and seals it tight in a zip-lock bag.

Three tries before he found a spot
that would drain. First, he dug too close
to the creek—he should have known
because he could smell water
each time the blade struck soil.
Next, he sunk them along the top of the ridge,
but the inspector said no—that rusted
post hole digger had smeared the clay.
“I need to see striation,”
the man said, pointing at the wall of dirt,
“where one kind ends and another begins.”
Finally, Nohl just paid the man to do it,
and, sure enough, the permit was filed
two weeks later. Dirty work from the start,
and the wettest May in fifty years
until June set everything sizzling
just as he hauled the trailer up, planted it on blocks
beneath the meager shade of a White Oak.
He could see the original holes
from the stoop—cinder blocks stacked
beneath the screen door. They were still wet.
Even when that giant, yellow Komatsu
heaved the first barrel of mud
from where they’d marked the foundation,
those holes still hadn’t drained. Each evening,
as he sucked on his cigarette, Nohl tried not to look.
His mamaw had read tea leaves,
and he knew his new family’s future must be floating
with the pollen in those warm, brown wells.

When their parents
got to fighting
Nohl and his brothers spent
weekends at Mamaw’s. Always,
they brought the Benjamin Air Rifle.
They shot Coke cans
off the back fence,
shot patterns in the bark
of that Black Walnut.
But they didn’t shoot anything living
until Mamaw said to
get rid of them,
those small brown birds
with the bobbing heads
that darted back and forth
between the eaves and the water
pooled in the sinking flagstone.
She said they would tear
petals off her pansies,
spot the walkway with their shit,
maul nesting bluebirds
and then hatch their own eggs
on a pile of feathers, bone, and shell.
“If you boys could just
take out three or four,” she said,
“the rest will surely fly away.”
But bird shot never
makes a clean kill—
they hopped around,
flapped their wings before collapsing
in the mulch. Even then,
the feathers ruffled and heaved.
And all the next day,
Nohl could hear frantic
chirping from under the eaves.