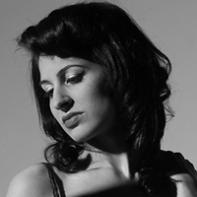 Suzanne Marie Hopcroft's poetry has appeared or is forthcoming in South Dakota Review, Weave Magazine, Sierra Nevada Review, PANK, Word Riot, and others. Suzanne is a PhD candidate in Comparative Literature at Yale University and writes from New York City, where she teaches composition at Hostos Community College.

I covered the cherries for blotting that my
brothers had water-sprinkled. Gingerly,
like they were still hanging swollen on the
bush—these small lumps of bitter, of skin.
Fall was a lamppost that had bent from us.

The crickets sang like new chalk in the wet.
My small girl, the one who follows me on
the city rails, caught beetles and flies with
fire at the border of the woods. Nobody
squeezed the neck of the cornered guitar.

Afternoons, the thin boat we didn't rent was
floating in the backyard: rocking the cool air,
smoothing it down. On my bicycle I veered
left without extending an arm, braked fast
and tumbled over the graying ghosts of cars.

In the hours after the too-long
eclipse, the roadways were embroidered
with the exposed musculature of
cars and trucks that had jolted together
and stopped. Their edges crumpled, long lines
of them snaked unmoving in an abruptly
indolent train. The beating wing-
blades, when they came, barely managed
to pleat the humless calm.

Days later, debates would center
on the small: the reproductive cycle of
thrushes, what moment June might unpack her
paints. This was, we felt, unwise. When
the majesties unfurl a tablecloth over the sun,
you don't squander time counting the number
of checkers. You don't tremulously
unpack your small microscope. We did not,
however, expect this to be understood.

Still, feeling something intuitively
that resembled a lack, even agnostic
girls hunched cross-legged at the
front quarter of their tubs in the nights that
followed, carving out some inverted form of
plea. From our windows we saw them
letting out the cold water and keening over
the hot: hugging the stream, letting
it suck them gently down.