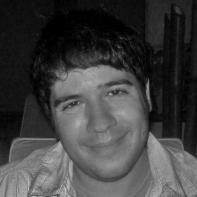 Keith Montesano is the author of the poetry collection Ghost Lights (Dream Horse Press, 2010). His poems have appeared or are forthcoming in Blackbird, Mid-American Review, Third Coast, Hayden's Ferry Review, Quarterly West, Ninth Letter, RHINO, and elsewhere. He currently lives with his wife in New York, where he is a PhD Candidate in English and creative writing at Binghamton University.

The Author as Man Who, through Binoculars, Sees Sheriff Boyd Shot and Dying on the Side of the Road in Breakdown
After the film by Jonathan Mostow

that I always told myself I would: a long walk in the heat,

winding roads & rocks & hills: anything to take me out

of my mind, the way you left me, how I did nothing

for an endless stretch of miles. Through them: the cruiser

& gunshots & the man tripping over the edge & nothing

I could do to help or stop it. The cop was shot & I swore

I could hear static among the dust, then the man in black

who fell in slow motion. I waited. An hour later, too late:

an ambulance & two men being loaded into it. What could

I tell them? Once dusk settled & the sky turned pink

to black, I knew I'd witnessed something I wanted

to write you in a letter, if you'd ever believe me again.

On that day the rain finally stopped, I could breathe again,

a blanket you could see through draped over me, when

we learned—those of us ignored, kicked, tripped over—

that life, what's left now, is nothing to anyone, the lives

that Abberline couldn't save. Some of us were witnesses that week—

But we never stirred & left ourselves under the fog & lamps

to listen & always remember what we heard. Always grapes

in the future, & Laudanum, the combination they wanted,

that Dark Annie needed as she walked into the corridor

& slowly disappeared into the night, the carriage blocking my view

before I waited for a scream, a breath, & heard nothing.

Already drunk & you asking for more: I abide & drive

to the place we avoid, one with a robbery, it seems,

almost every week, something we feel guilty for, something

we wish wasn't true. Outside, the car running, I smoke

my last cigarette, remember you saying: Cheap. I never

thought we'd end up like this, & God knows there has

to be a reason why we're still in love. Ashing it, smoke

rising, I see him go in, the guy behind the counter duck,

& without a mask, a gun drawn. I can only watch: the one

in the back, empty, mouthed words, hands waving, metal

now to her head as he pleads nothing I can understand.

One shot & she drops. & I duck, waiting for him to see

the exhaust, the last wisp of smoke, when there's nothing left

but him cradling her head, & her open eyes toward his.

if I ever leave this floor, which I imagine I won't

as I stare into his open eyes, blank face, the Santa hat

resting there silently, all before the screams start

& I wonder if my heart would stop if I escaped

& was able to jump, if it would seize in the middle

of the fall. Things don't happen like this. People

usually don't escape—so why should we? I thought

about prayer as I stared at my father in the casket

he was dying, an entire year with the help of machines,

or even when he was alive. I don't know what they want,

but if the building goes up in flames, let me not be

trapped, unable to move, & let it end before it begins.